Pity the poor Minneapolis street that gets caught in the middle of one of the city’s long blocks. Our civic commitment to order and tidiness determined that streets would be numbered and gridded, and occasionally that comittment involves a casualty. In addition to streets like 21st and 23rd being banished to a plane of nonexistence for not quite fitting the numbered system, there are a number of streets and avenues that get downgraded to “half” or fractional status. Most of them are only a block or so long.

One such street is E. 36½ Street in south Minneapolis. Like most of the half-streets, it was built after the order of the streets had already been determined. You can’t very well tell the owners of a house or business on E. 37th Street that they will henceforth be on E. 38th Street because everything needs to be shifted a block south on account of one three-block spur. So that spur gets stuck with 36½.

36½ is one of the longer half-streets in the city — it runs for three blocks between 21st and 24th Avenues, beginning at Folwell School and terminating at a row of one-story houses. Unlike some of the half-streets, it’s not an alley. There are quite a few houses facing it with 36½ Street addresses. (There’s a West 36½ Street, too, in St. Louis Park near Excelsior Avenue.)

A look at some old plat maps gives somewhat of an idea of why the street exists in this fractional limbo. The small plat of land between 21st and 24th Avenues was known as the Sunny View Addition, and enthusiastically advertised as conveniently located plots of land ready for development. If you’ve looked at your own home’s plat map, you probably know “additions” tend to be named stolidly for whoever is buying or selling them – Sunny View is surrounded Hull’s, Wilber’s and Marble’s Additions. Someone clearly had a keen sense for the type of real estate nomenclatural wizardry that continues to inspire realtors and Craigslist ad posters to dream up evocative new names for existing neighborhoods. Why buy a lot on something called “Hull’s Addition” when you could buy one with a sunny view? They couldn’t say it if it wasn’t true, right?

It’s ironic, then, that what might have been E. Sunnyview Street was slapped with the anodyne designation 36½ Street. The City Council bestowed the name with not much discussion or ceremony in the late 19th century, and that’s how it’s appeared on maps every since. 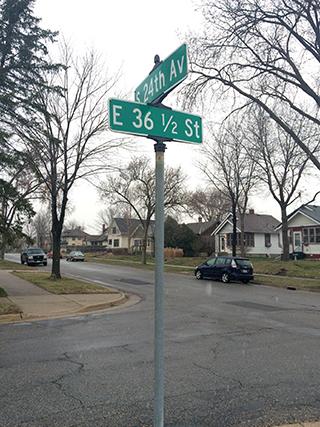 I wonder what people sending mail to 36½ Street addresses imagine when they write the address out. Literally half a street, running through backyards? Or a street the width of a sidewalk, filled with half-houses, as if cut in two? In writing this piece, I found myself wishing for a comprehensive cultural history of streets with fractional names – alas, no such volume exists, and so the burden falls on one of you or maybe me to write it someday. Most references to fractional or half-streets I found are in crime novels to convey a sense of disordered seediness (Bert Oldenhuis’ “A Dog House Tale”: “a short phone call to the agent from the hotel desk found Bouncing Barry in a taxi, on his way to a flophouse in Yokohama, not far from Two and a Half Street”), or are related to the Lincoln assassination conspiracy, a number of whose participants inevitably fled down shadowy fractional streets in Washington, D.C., after committing their crimes (“I followed him until he went down E Street and passed Thirteen-and-a-half Street, and saw him go into the Kirkwood House”), or turn up elsewhere to shorthand liminal or transitional spaces in the urban fabric (from Sidney Bechet’s memoirs: “just off this entrance there was something like a street in there, M and a Half Street it was called”). 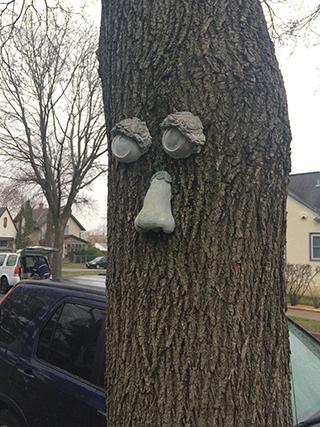 In fact, 36½ doesn’t look much different from most streets in the city. It’s not seedy, shortened, or otherwise transitional. The biggest difference is that the lots are oriented north-to-south, and not east-to-west as they are elsewhere in the neighborhood, making them appear a little shorter than they would be on full city blocks. Otherwise, the streetscape is dominated by the sort of small stucco and brick cottages built for and by industrial workers in the early part of the last century. At the time these lots were being sold, advertisements for the Sunny View Addition highlighted their close proximity to the Milwaukee train yards along Hiawatha Avenue, and in fact the industrial developments loom in the distance like skyscrapers. Many of the first people who lived in these houses undoubtedly had jobs with the railroad, or in railroad-adjacent industries. There are a number of relatively grand structures on nearby streets – the Folwell School and its colorful Greta McLain murals sit at the head of the street, and the Henry W. Adams Mortuary on the other end has an austere grandeur. But the houses on 36½ are tidy, small and mostly one-story affairs. 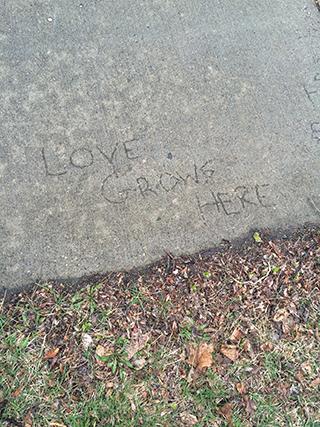 It’s a short walk, but there are some clever and charming touches to the landscape along the way that seem to denote an active and imaginative family life in many of the residences. A relatively new patch of sidewalk announces “Love Grows Here.” A tree on the north side of the street has sprouted two eyes and a nose. A stop sign has a bouquet of sticks and twigs rising from the back – an attempted bird’s nest, maybe, or an intervention by some neighborhood kids. One brown, yellow and pink cottage seems to have a stucco chimney and fireplace built into the front porch, composing what’s undoubtedly one of the most impressive mud rooms in the neighborhood. Between 23rd and 24th Avenues, there is a notably wide alley with some detached garages on it that could almost qualify as 36¼ Street, a fraction that has rarely been achieved in the annals of urban planning. (There were, at one time, a few quarter-fractional streets in older parts of Philadelphia, which have since been absorbed into the bottomless density of that city.)

So this isn’t the most impressive catalog of sites I’ve ever inventoried in this column, but I liked the spirit of the street. Even on streets with names that tell you almost nothing about them, and are identified more in relation to what they’re not, there are always things to see. Walking down 36½ on a recent weekday morning, the original name of the addition wasn’t far off – the sun was rising in the east, and all things considered, the view was pretty sunny.

The view is pretty sunny on south Minneapolis’ 36½ Street