If you’ve paid any attention to large-scale real estate development in the past 20 years – and come on, if you read MinnPost, there’s a better than likely chance you have – you’ve already read reams of copy about the future of Pentagon Park, the once-iconic Edina office park at Highway 100 and Interstate 494.

You’ve probably read statements like this: “It has an excellent location. We saw an opportunity to manage it well and correct the functional obsolescence and the stylistic obsolescence.”

That was a developer speaking in 1987, 20 years after Pentagon Park opened. Almost 30 years after that, and in the early stages of a massive new redevelopment of the site, the comments are verbatim: great location, stylistic and functional obsolescence. Part of the 43-acre site has been demolished, and the rest awaits significant development in the near future. Parts have already been rehabbed: new interiors, new tenants, new signage, a fresh coat of paint. The campus will, in years to come, be mostly unrecognizable.

We hear about the future of sites like Pentagon Park quite a bit, and occasionally hear about their past. What we tend not to hear about is the present reality of these types of sites. Walking around the Pentagon Park campus today is, in its current transitional state, a fascinating up-close look at how aesthetic styles change, how land use values change, and what the visual landscape will look like when buildings constructed in relatively recent memory age into obsolescence.

First of all, that name: Pentagon Park. It could only have come from the 1960s, a decade popular history has been misremembered as a countercultural free-for-all, but that was a time of deep conservatism for much of the country, and particularly for the suburbs. The site opened in 1969, but the name “Pentagon Park” was clearly chosen early in the development process, dating back to the mid-1960s. The now-demolished southern portion of the site, which has been rebranded as The Link, was somewhat pentagon-shaped – the individual parts of the remaining parcels on the north side are shaped more like a pi. Either way, the name conveys authority, strength, and trustworthiness, values a mainstream American might have associated with the Pentagon in the pre-Gulf of Tonkin era. In fact, the year Pentagon Park opened was the year Daniel Ellsberg leaked the Pentagon Papers. It’s hard to think of any other institution in American life that was in for such a beating in the 1970s than the Pentagon. 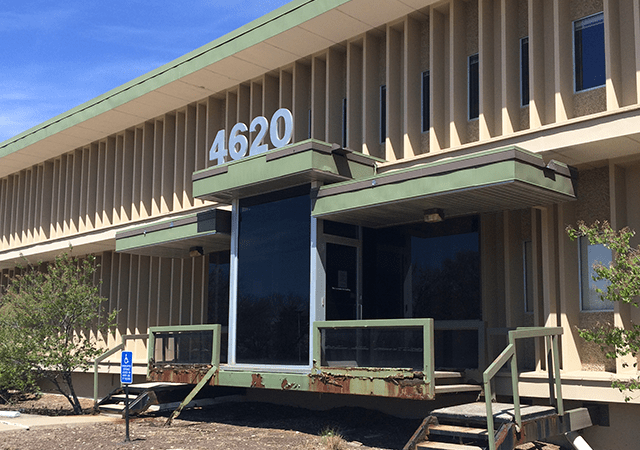 Indeed, the business directory for the tenants in 1970, Pentagon Park’s first full year of operations, reads like the contents of a well-balanced stock portfolio your financially savvy Nixon-voting great-uncle might have owned that year: General Electric, General Mills, and General Motors, along with other technology, insurance and employment firms with names like the Techanalysis Corporation, Professional Data Systems, Automated Systems Incorporated, Tech Power, Northwest Data Incorporated, Computer Tax Services, and dozens more.

Almost 50 years later, the older parts of campus are crumbling at an alarming rate. Metal stairways sag and droop, and some appear on the verge of imminent collapse. Entire swaths are encrusted with rust. Even the developer’s current website allows that the site has long been “synonymous with blight and failure.” But even through the decay, that sense of corporate power still shows through. The fronts of Pentagon Park’s vacant offices retain a cool, technocratic disdain for fussy ornament, sentiment and whimsy that can’t entirely be hidden behind a façade of rust. The qualities that people often hate about modernist architecture like this – its spareness, its lack of organic shapes, its refusal to kowtow to the styles of the past – are exactly its most attractive qualities. Pulling into the massive parking lot of Pentagon Park in 1969 and walking up into that fortress-like campus must have seemed like walking into a bright, clean and progressive future where technology and order had finally wiped away the dirtiness and disorder of the early 20th century. Compare, from that state of mind, Pentagon Park with the Gateway District of downtown Minneapolis 11 miles northeast, where the landscape must have seemed encrusted with cancerous vernacular architectural growth left over from the 19th century. 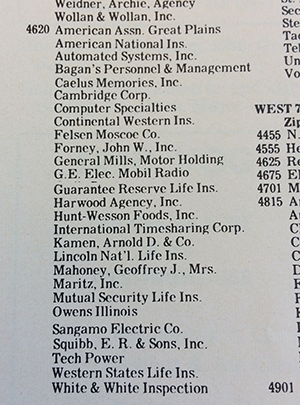 It’s hard to see that perspective now, since the leveling of the Gateway District is now generally regarded as one of the city’s great aesthetic crimes. That’s why walking through the pre-redevelopment portions of Pentagon Park now is almost poignant – you can’t totally wipe away corporate modernism’s triumphalist smirk, but wait around long enough, and the winners become losers eventually. Pentagon Park looks now as blown-out and decrepit as those Gateway District flophouses looked in 1960, though it’s stood only half as long as they did.

The parking lot is, of course, unfortunate in the way most sprawling surface parking lots are unfortunate. The whole campus is oriented around it, and it has a doubly ghostly quality. Half is completely abandoned, as you might expect for an abandoned office park – that’s ghostly enough. The other half, though, is packed bumper to bumper with late-model Jeeps, Cadillacs and Subarus. Upon closer inspection, they’re from some of the nearby Walser auto dealerships, which evidently use the property for overstock.

The extant Pentagon Park property sits on the north side of 77th Street. The eastern portion has been redeveloped, and has a large number of tenants, including a day care center. The transformation has started here – the harshness of the architecture has been softened with some color accents, and new signage has been added to the exteriors. The windows are all new, the interiors renovated.

The western half, though, is largely vacant for the time being. There are signs throughout providing a crude timeline – water shut-off notices from 2012 and 2013. It seems shocking that the buildings were evidently inhabited so recently. The decay looks decades old. It makes you wonder: if you stopped regular maintenance on any commercial property, would it really fall apart this quickly? If you’re wondering what the strip mall on the highway near where you grew up is going to look like in another generation, Pentagon Park in its current state provides a grim preview of coming attractions. 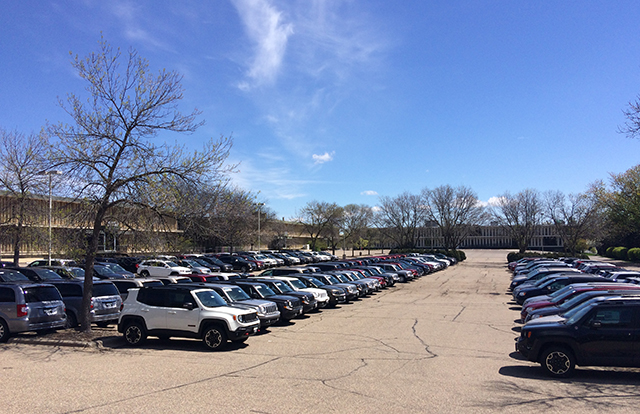 Forty-five years isn’t quite old enough for a building style to seem automatically historic and charming, but it’s just on the cusp. From the perspective of 75 years, Pentagon Park’s thin vertical fortress windows, pebbled concrete facades, glass blocks, and the way its sharp angles throw dramatic, reiterating patterns of shadow across the front might seem wonderfully unpretentious and idealistic. It almost does today, from a certain perspective.

The factors that created Pentagon Park – interstates ringing the core cities, corporate flight from the city center into the suburbs, total automotive reliability – are no longer in play in quite the same way. Whether a site like this, so rooted in its place and time, can be rehabilitated for the needs and desires of the 21st century is anyone’s guess. The developers seem optimistic, and their promotional materials emphasize proximity to parks and bike trails.

If you’re out in Edina, take a walk across the Pentagon Park campus and poke at those heavy iron facades – not molded concrete, as they might appear from a distance, but painted steel. This type of decay is coming to the suburbs sooner rather than later. For a little while longer, until the rehabilitation is complete, it’s in full bloom at Pentagon Park. As unbelievable as it seems now, there will come a time in the near future when no one remembers precisely what a 1960s office park looked like in its prime.

Special thanks to Mike, Hillary and Marin.