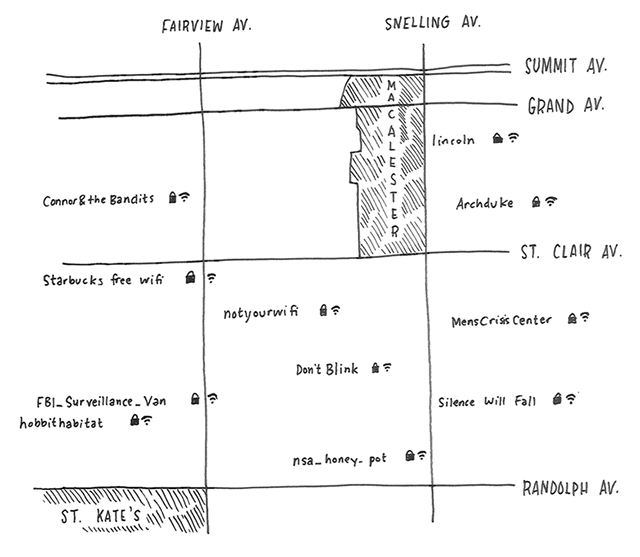 MinnPost illustration by Andy Sturdevant
Don’t worry, these aren’t the actual locations of these Wi-Fi networks. They’re all password-protected, anyway.

Walking through any part of the city, you’re surrounded everywhere by physical reminders of the infrastructure that ties us all together: power lines overhead keeping the lights on in the buildings you pass, and telephone lines connecting whatever communication devices there are in any given home, whether VoIP or fiber. Cable wires pump HBO onto flatscreen TVs, satellite dishes cluster on the roofs of shops and apartment complexes, and sewer grates and manhole covers top off the vast system of underground waterways and electrical arrays that keep civilization humming along.

Layered on top of these systems, though, is another communications network, this one almost completely invisible. The majority of homes and businesses now have wireless Internet, emanating at various strengths from Wi-Fi routers sitting on desks, by windows and on top of kitchen counters. Most of these invisible networks are made visible only by a name – usually designated by the Internet provider or router manufacturer (“CenturyLink8193,” “xfinitywifi”), but often gloriously chosen by the owner.

Custom Wi-Fi network names are one of the great exemplars of folk poetry of the 21st century. Any person with some basic technological know-how has the ability to give their Wi-Fi network a custom name, one that will be visible to the anyone else scanning the area for Wi-Fi on their phone or computer. Culturally, it more or less lands somewhere between a vanity plate (but more democratic) and a custom doormat (but more ephemeral). Email and screen names are perhaps an antecedent, but unlike those, network names are directly tethered to physical locations. The Internet is full of listicles of amusing (and not-very-amusing) examples of the art form: veiled threats to neighbors, bad puns, inscrutable jokes and other messages to the outside world. 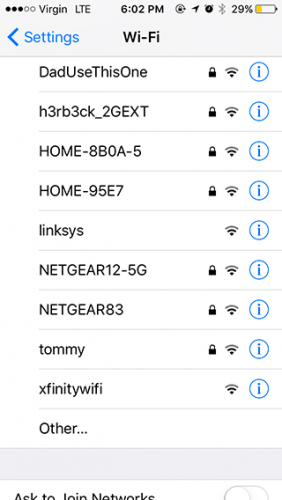 A filial beacon in a sea of confusion.

Recently, I set out through residential St. Paul to see if I could detect any patterns in the neighborhood Wi-Fi network names. My route between Macalester College and St. Catherine University was fairly arbitrary: the two schools seemed like good endpoints, though in retrospect, I ought to have chosen a route with more apartment buildings. Apartment buildings tend to have more tightly packed, publicly facing clusters of Wi-Fi, making for more density and liveliness in the names chosen. However, these neighborhoods are a good mix of businesses, apartments, duplexes and single-family homes, making for a variety of nomenclatural approaches.

So I wandered over about three or four miles, staring down at my phone nearly the entire time, taking screenshots every block or two. The list of Wi-Fi networks changes in almost real time, and I didn’t want to miss anything. I’m sure at least three or four self-righteous passers-by shook their heads as they walked by and thought, “Ah, these fatuous thirtysomethings with their faces buried in their smartphones, totally ignoring the world around them.” Not true! I was deeply engaged in the world around me, and now I pass my findings on to you. 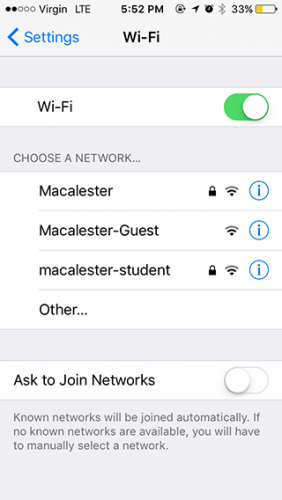 The vast, vast majority of network names I encountered were unremarkable. Perhaps two-thirds were of the myqwest4323 / NETGEAR4 / HOME-2AB variety. Another significant number were very literal-minded: you will not be surprised to hear Macalester’s three Wi-Fi networks are Macalester, Macalester-Guest, or macalester-student (all lowercase for the last one). You will also not be shocked to learn that The Wine Thief on St. Clair Avenue has named their network The Wine Thief’s Network. Quite a few others keep it simple: networks featuring proper names like Prindle, Steve, TroyandBecky, Z, Tommy, Straub, Foti-Rodriguez, Zenk and LotzerHouse all seem pretty self-explanatory.

However, the networks with custom names tend to fall in a few different categories.

Geography is a good place to begin. Wi-Fi routers tend to be located in very specific parts of a building. Beginning on the most micro level, a number of networks took names from their specific locations or functions within a building, as in the case of Chromecast Living Room or IA-Upstairs. Expanding from there, many were names for the house number, as in the case of the 115SnellSquad, or for the street specifically: Ashland, Stclair and lincoln.

Wider still, out of St. Paul and into the larger world: Montana, Oslo and Vienna2. 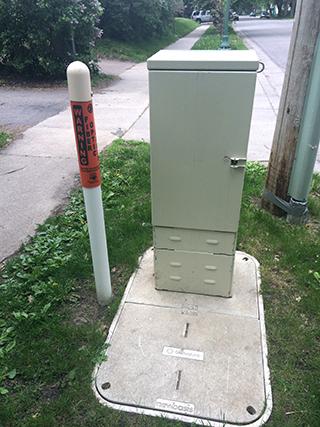 Worth mentioning here is that nearly every network mentioned was password-protected. Network names are publicly viewable, but only occasionally publicly accessible. If you live in a reasonably dense part of the cities, you probably recognize at least a half-dozen of your neighbor’s networks are regularly popping up Wi-Fi settings, and which of those are unsecured, which are locked up, and which you could probably guess the password for. Many of the names acknowledge this public/private tension: WiFiLibre, WiFiOrDie, and notyourwifi are all secure networks. There is a genus of smart-ass names relevant here, best expressed by a network called Starbucks free wifi, which was neither located at a Starbucks nor was freely accessible. This sort of intentional winking ambiguity is out there. I decided that the network called MensCrisisCenter is probably a tongue-in-cheek joke made by a collegiate house full of dudes, since I couldn’t find evidence of an actual men’s health or crisis center located in the vicinity. The nearby networks called clevername and clevername-guest also take the Wi-Fi network nomenclatural self-awareness to new levels.

Perhaps it was just the neighborhood, caught as it is between two colleges, but politically charged references were common. A future historian could compile a list of early 21st century Wi-Fi network names and examine about how they reflect our half-outraged, half-shrugging views on surveillance and security. There were networks named NSA and the more overt nsa_honey_pot, as well as an FBI_Surveillance_Van and the legitimately mysterious NSB.GOV (National Science Board? Neighborhood Services Bureau? Navy Standardization Board?). I’d love to know the political affiliation and employment details of the person who owns the Wi-Fi network named Activist-judges. I imagine a small Mac-Groveland pied-à-terre for Ninth Circuit Court judges.

Although Wi-Fi is a pretty common part of most people’s daily lives, setting up a router can still an intimidating task for a layperson, and there’s still an idea that it’s best handled by a technologically competent young person – for lack of a better term, a nerd. To that end, there were a large number of nerd culture-oriented references that seemed appropriate for the topic. Among them: A Serious House on Serious Earth (very arcane Batman reference), hobbithabitat and You Have No Power Here (J.R.R. Tolkien references), Ravengard (Dungeons and Dragons reference), Winterfell (Game of Thrones reference), 2 Hot Dogs, 1 Shake (potentially veiled and very gross Internet video reference) and Vader did nothing wrong (the obligatory Star Wars reference). 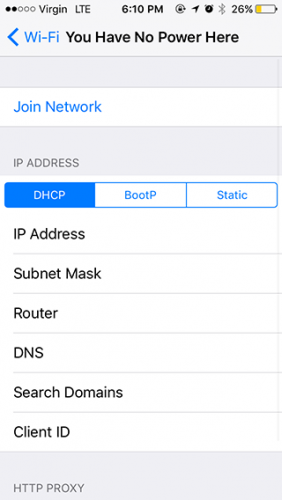 Against the power of CenturyLink there can be no victory.

Besides these, quite a few are not easily categorized. Of the more than 100 network names I encountered, some of my favorites were not the most clever or jokey, exactly, but those that had a private quality to them. Some were little sentence fragments, almost poems: Don’t Blink, Sell Something Every Day, Silence will fall, Summerfruits. Others had the easygoing bonhomie of college nicknames: Archduke, Connor&theBandits. Others still are totally impenetrable: darlingmenard (a love song for a regional hardware giant), Piston Peak Airbase (a Pixar reference), Coral Silk, The More-Better Princess Network, and phlogistan (a fire-like element postulated by the Ancient Greeks, and winner by far of the award for most arcane reference).

Of all of them, though, my favorite was one over by Fairview Avenue: DadUseThisOne. It perfectly expresses the not-quite-public-not-quite-private space that all Wi-Fi network names must negotiate. There are a few different possible scenarios here: A young person set it up for their elderly father, and wanted to be sure he didn’t get confused by all the Linksys and xfinitys out there, so made a clear beacon amid the confusion in his or her own voice: DAD, USE THIS ONE. Either that, or it’s an older person with a keen sense of irony making a self-deprecating joke about his own technophobia. Possible still is that it’s a bunch of sarcastic college kids laughing it up at the expense of their elders, or someone else making a little bon mot for passers-by creeping on the Wi-Fi.

In any scenario, it works beautifully for this particular format: It tells a little story about the network’s owner, makes a private sentiment semi-public, and then disappears in about half a block.

Addendum: It has been brought to my attention by reader David that “Don’t Blink” and “Silence will fall” are both Dr. Who references, putting them more in the so-called “nerd culture reference” category. My apologies to Dr. Who fans. The show has always been a massive cultural blind spot for me.