The endless residential grids of the Twin Cities conceal their secrets well. All but the most obvious artifacts and sights, those located on primary thoroughfares or in centralized public spaces, tend to be hidden away. In the Summit-University section of St. Paul, wedged roughly between I-94 and Ayd Mill Road, which rips up through the urban fabric like a bank shot, there are at least two small monuments, quite different from one another, located less than a mile apart. Like the best types of sites around a city, they have little to do with one another, save for the fact that they share a neighborhood and you can walk from one to other over the course of 15 minutes. 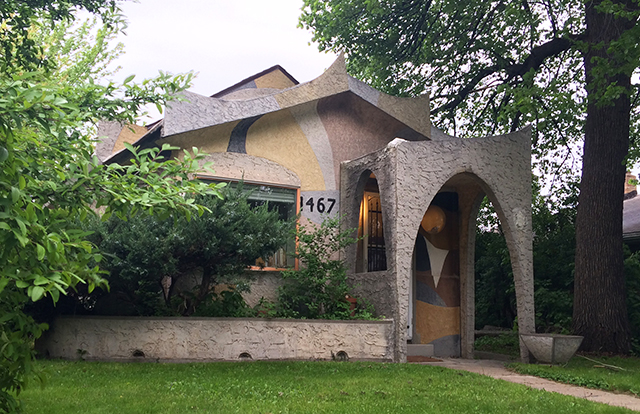 The Pilmer House, as it’s been dubbed by its great champion, the St. Paul author and architecture critic Larry Millett, is located near the end of the block on Iglehart Avenue near Pascal Avenue, about two blocks south of I-94. You’d never find it unless you were looking for it, or unless you lived right in the neighborhood and passed it while walking your dog. Named for its mastermind, a Scottish-born plasterer named George Pilmer, the house is a folk-art stucco fantasia, easily one of the most distinctive and remarkable private addresses in the city.

If it were located on Snelling or Marshall, you’d hear about it all the time.

Not on Iglehart Avenue. It’s an exceptionally good place for a small secret like the Pilmer House. You can’t walk, bike or drive from one end to the other directly, as it’s interrupted by a number of major institutions in St. Paul – Concordia University, Central High School, Penumbra Theater. Iglehart is parceled into short, tree-lined segments that don’t see a lot of through traffic. The house lies in one of these segments, between Snelling and the industrial parcel that includes the Post Office.

Pilmer no longer lives at the address, but over the course of a few decades beginning in the mid-1970s through the 2000s, he methodically transformed a small worker’s cottage into a whimsical, tiny stucco cathedral. It looks like it could have been created at any point between 1916 and 2016 – the shapes and angles don’t refer to any one specific architectural style, but all of them. A cathedral-shaped arch stands at the front entrance. Behind it is a house that miraculously seems to both scrupulously follow the standard Twin Cities stucco color scheme (beige, light yellow, stone) and push that color scheme to its limits. Bands of lighter and darker color cut through geometric designs, and the east wall is a cluster of colorful orbs, floating through some ethereal stucco space like molecules or asteroids. 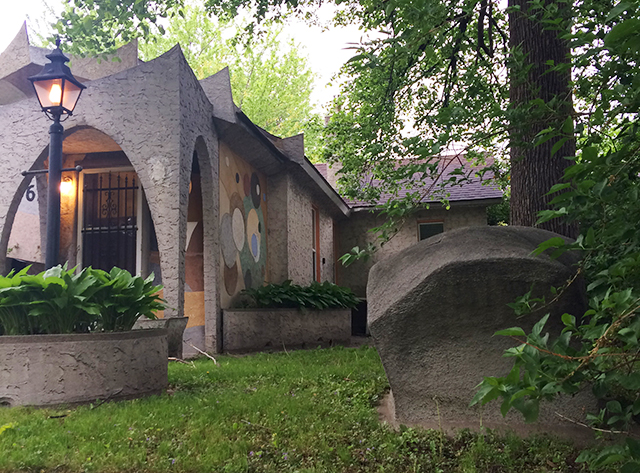 MinnPost photo by Andy Sturdevant
Orbs in space, in stucco.

There are colorful, unique touches all over the front yard: a concrete riser that seems to push the entire property into the air, and a handful of architectural objects that enhance the landscape – one such bunch was dubbed “Deep Space Nine” by Pilmer, and seems to resemble the nearby Merriam Park substation power array, reimagined as a petrified forest of Neolithic totems. The coup de grace may well be a plastic salad bowl by the front door that serves as a Space Age portal into the mud room.

Plasterers are less in demand than they once are, but the Pilmer House is beautiful proof of how a skilled tradesperson can take a craft learned over a lifetime, and apply it to ingenious ends. The house George Pilmer created is unlike anything else in town. It’s tucked away in a quiet neighborhood, but take a detour next time you’re making your way down Marshall Avenue and see for yourself. 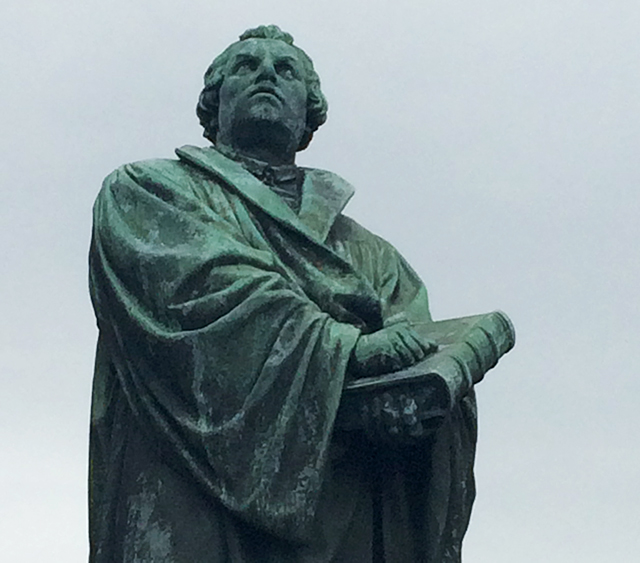 MinnPost photo by Andy Sturdevant
“So essential was his size to his image that even when we see only his bust, his broad shoulders and fleshy face make him instantly recognizable.” — Art historian Lyndal Roper

For a set of towns so reputed to be Lutheran in orientation, the man for whom the denomination is named doesn’t turn up in public very often. There is, as far as I know, only one major statue of Martin Luther in the Twin Cities, located not far from the Pilmer House on the campus of Concordia University, in the heart of Catholic St. Paul.

Really, most statues of Martin Luther in the world are reproductions or variations of one statue in particular. The original is by the German sculptor Ernst Friedrich August Rietschel, created in 1868 and located in Worms, Germany, the site of his 1521 confrontation with Holy Roman Emperor Charles V. A copy was cast in Washington, D.C. 16 years later for Luther Place Memorial Church. Eleven versions were subsequently created elsewhere for Lutheran institutions in the U.S., including this one at Concordia. You can even buy little stone resin reproductions of it on a number of evangelical websites.

Luther is portrayed here making his stand at the Diet of Worms, hand on the Bible, proclaiming “Here I stand; I can do no other. God help me.” He’s draped in a robe, stepping forward, tousled hair framing a stout face.

He looks defiant, and in fact, almost enraged. Luther was not, by any reasonable estimation, a handsome or even pleasant individual, as his sculptural representation here makes clear. He possessed, according to one a scholar, a “double chin, strong mouth, piercing deep-set eyes, fleshy face, and squat neck.” This was no hollow-cheeked, rail-thin and haloed saint, the sort portrayed in Catholic imagery in the middle ages. He was an earthy, heavyset German bruiser who drank beer and was married – “behavior that was a stark contrast to the ascetic life of the medieval religious orders.” 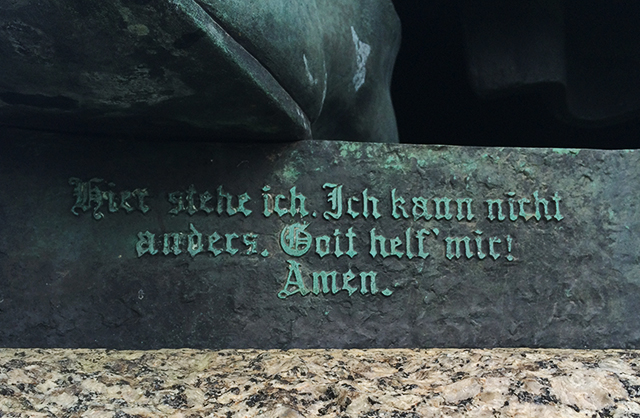 MinnPost photo by Andy Sturdevant
“Here I stand; I can do no other. God help me.”

In fact, it was this imagery of Luther as a physically imposing, earthy sort of fellow that helped popularize his message – perhaps a medieval variant on the contemporary political canard of being the sort of guy you’d like have a beer with. That raw, vernacular charisma was part of what held the early Protestant movement together, and woodcut representations of Luther by artists like Lucas Cranach the Elder – easily reproducible for the first time because of new printing technologies – were a large part of the spread of Lutheranism across Europe.

Even nearly five centuries after the fact, this statue plays on those early ideas of Luther’s physicality that put him in stark contrast to the religious iconography of the Catholic church. Consider the statue of St. Thomas Aquinas on the side of the chapel at the University of St. Thomas, a mere two-and-a-half miles west on Marshall Avenue. Despite being depictions of robed religious figures holding Bibles, created in roughly the same time frame and located on the campus of a religious institution, they have little in common. Aquinas is ethereal, pensive and slender. Luther is none of those things.

The statue was donated to the school in 1921, the 400th anniversary of the event it represents. The base has his famous words in English and in German, and a note about the fabrication and donation. It was cast locally by Flour City Ornamental Ironworks of Minneapolis at their foundry, located in what’s now the Ivy Building in Seward, a name which is itself a gracious rebranding of a gritty industrial area known then as “the Hub of Hell.” Somehow it’s appropriate that the earthy Luther was carted across town from this hard-drinking, heavily Protestant part of the city.

Concordia students apparently often refer to “Luther” when determining a meeting location on-campus. Sometimes, with these types of statues, you’ll get a little polished-off area where students have rubbed a foot for good luck on their way to exams. Nothing of that sort with the Harsh Doctor. Maybe it’s a sign of their respect. Or maybe they know from their theology classes that you don’t want to get on Martin Luther’s bad side.