Rollins Triangle is a 0.05 acre park located at Minnehaha and 33rd Street in the Longfellow neighborhood, a tiny triangle carved out by Minnehaha Avenue cutting through the grid and intersecting East 33rd Street and 29th Avenue S. It’s one of a handful of triangle parks owned by the city of Minneapolis, so it does technically qualify as a park in the loosest official sense, though its most formal classification is as a “triangle” and not a “community park.” It isn’t the smallest park in the city (that’d be Orlin Triangle in Prospect Park), or the most beautiful (that, according to the preeminent authority on this topic and indeed any city park-related topic, David C. Smith, would be the several that are maintained by the Prospect Park Garden Club, or perhaps Laurel Triangle in Bryn Mawr). But Rollins Triangle is among the smallest in the city, and is certainly located on the busiest thoroughfare of all the triangle parks. I pass it all the time, at least in part because my favorite movie theater and bookstore are both right across the street.

According to Smith, the city assumed stewardship of the triangle in 1929, and the City Council named it in 1931. It sits on Rollins’ 2nd Addition, which gives the triangle its official name. I can’t quite figure out who Rollins was. My guess is that it’s Captain John Rollins, a Maine-born miller, University of Minnesota regent and riverboat captain who owned a fair amount of land around town. But that’s just a guess.

Five-thousandths of an acre comes out to roughly 2,178 square feet, or in this case, about 147 feet by 89 feet by 136 feet. According to a 1982 inventory of the parks along the Hiawatha Corridor prepared by the city of Minneapolis and the Minnesota Department of Transportation, Rollins Triangle contains the following amenities:

And that’s about it. 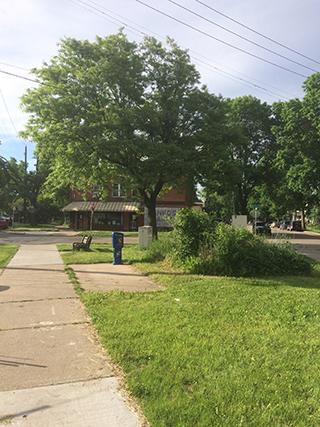 MinnPost photo by Andy Sturdevant
From the southern tip.

Well, no, there’s more. I mean, obviously there’s not a tennis court or drinking fountain, but you at least can sit down. Like any corner of the city, Rollins Triangle has a few things going on if you’re willing to hang out long enough. A recent interpretive plan [PDF] for the corridor described Rollins as a good potential site for improved landscaping and interpretive installation, all of which is true. The nature of these triangles’ creation – a quirk of geography in the layout of the city’s streets – makes them overlooked as public spaces. In that spirit, I present this inventory.

One of two trees on the triangle, this one on the 33rd Street side. It’s certainly the larger of the two, and its shade covers nearly half the triangle. The fruit from a honey locust can apparently be fermented to make beer, if that’s something you’d be interested in doing sometime. Honey locust beer could occupy an interesting niche in the ever-fragmenting local craft brewing market.

The other tree, significantly more wan and providing less shade, on the Minnehaha Avenue side. The hackberry tree also has an edible fruit, and one even more delicious than the legumes from the honey locust. You can eat hackberries raw, or grind them up into a sweet and fatty paste. If you recall the Lotus-eaters from reading Homer’s Odyssey, the hackberry is supposedly what they were eating. I suppose you run the risk here, like the Lotus-eaters, of being stranded forever on Rollins Triangle, munching hackberries in a stuporous, narcotic bliss: “so delicious that those who ate of it left off caring about home, and did not even want to go back and say what had happened to them …” 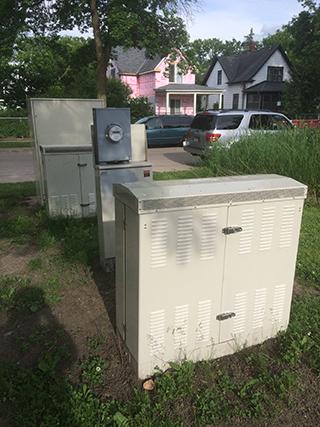 MinnPost photo by Andy Sturdevant
Not all fun and games.

According to a 2012 survey, there was a Fraxinus pennsylvanica on this spot. It seems to be gone now, unfortunately – green ash is one of the species attacked by emerald ash borer. A quick count of the rings in the stump indicates the tree was probably born about the same time I was in the late 1970s. The green ash has been a popular, hardy ornamental tree in Midwestern American and Canadian cities for the past century, and has also been imported to growing cities in China and Russia for landscaping.

To reflect on the fate of the green ash, here is the most wonderfully unverifiable anonymous story about this particular tree from the annals of the Internet for your consideration: “When one Chinese city’s original collection, which had survived into late 1980’s suddenly all died, city fathers used trees by sending them back to America as wooden crates containing Chinese made parts supplying the American auto industry.” There is a great parable about globalism in there somewhere, but I’ll leave it to you the reader to find it.

On the north end of the triangle, there are a number of utility boxes and meters for nearby properties. These are here to remind you Rollins Triangle isn’t simply a frivolous triangle-shaped venue for unchecked leisure, but a hard-working little corner of the city where the important business of public utilities is being conducted. Of course, I may also be overthinking this.

The centerpiece of the triangle is a garden, barely reined in by a rustic wooden base, tall grasses spilling over and not regularly maintained. There is clearly a lot going on this garden I am not qualified to speak about, from a horticultural perspective, but it does seem to contain a wild, diverse mix of grasses and fruit-bearing blooming plants. Any of you readers are welcome to take on the role of The Stroll’s Special Gardening Correspondent in the comments section below if you have anything to add about the composition of this particular green patch. 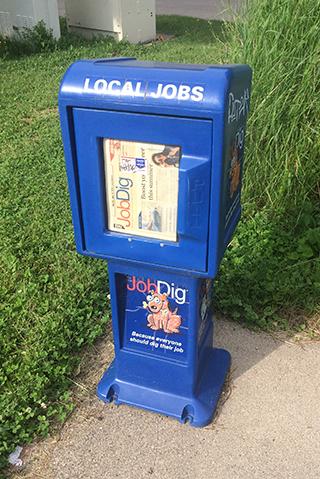 MinnPost photo by Andy Sturdevant
Among the most indestructible features of the urban landscape.

Someday, in the distant future, when our emptied cities lie bereft of human presence, silent except for the sound of the wind blowing through blades of switchgrass creeping up through the decaying pavement to reclaim the prairie, there will still be blue plastic newspaper boxes everywhere with new issues of JobDig appearing inside of them every week. JobDig boxes are maybe the most indestructible feature of the urban landscape. In fact, the JobDig’s parent company has been doing well enough in the past year to move into trendy new offices in the Warehouse District, so I expect these blue boxes will continue to proliferate throughout the bus stop-adjacent corners of the urban core. Based on the small concrete plaza on Minnehaha Avenue, it looks like Rollins Triangle may have at one time had a Star Tribune newspaper box, and possibly a few others. No more.

If a person waiting for the bus is completely bereft of leisure activities to occupy them, there is a Sudoko puzzle on page 6 of this week’s issue. 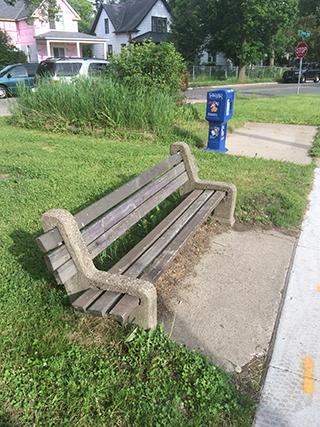 And the bench, of course. It’s a nice one, and very possibly the same one immortalized in the 1982 inventory. You know this type: exposed wooden slats, with a precast pebbled concrete base. The 7 bus, which connects the airport to Plymouth Avenue North via Minnehaha Avenue, has been diverted for a few months during construction. So you’ll have the bench to yourself this summer, in all likelihood. There are much worse plans for a lazy summer afternoon than buying a book from Moon Palace, getting a drink to go at Peace Coffee, and sitting on a bench reading in the shade of a honey locust tree on a tiny public triangle. The construction has actually dampened the traffic on this stretch of Minnehaha, so it’s really prime time for enjoying Rollins Triangle.

A complete inventory of Rollins Triangle, one of Minneapolis’ smallest parks