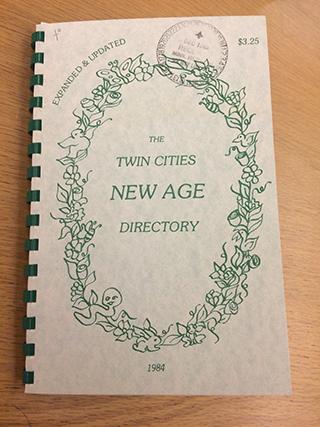 MinnPost photo by Andy Sturdevant
The directory: $7.48 in 2016 dollars

“New Age” is one of those terms that tends to be applied more often to other people than to oneself. The term itself covers so many different types of practices and beliefs that any two “New Age” practitioners could hold diametrically opposed views on any number of topics (say, reincarnation, or witchcraft) and still turn up at the same conferences. One scholar in the mid-’90s, about 15 years into the New Age era, tentatively advanced the idea that New Age could be described as “ideas and practices regarded as alternative vis a vis dominant cultural trends, especially if those ideas and practices seem to be concerned with ‘spirituality.’ ” He follows up that apostrophe’d shrug with this clarification: “This is largely due to the fact that New Age is not an organization, which could be unambiguously defined on the basis of self-proclaimed leaders, official doctrines, standard religious practices, and the like.” New Age, he goes on write, “means very different things to different people.”

This was undoubtedly the challenge facing Alene Schneider, compiler and publisher of the 1984 guidebook “The Twin Cities New Age Directory.” Some 100 businesses, individuals and organizations are listed in nine categories over 70 pages. Only some of these would probably explicitly categorize themselves as New Age if you’d called them on your landline phone in 1984 and asked, “Hey, are you guys one of those New Age outfits?” They might bristle at the term, and tell you, Well, maybe, but we think of what we do as holistic medicine, or lifestyle counseling, or traditional macrobiotics. 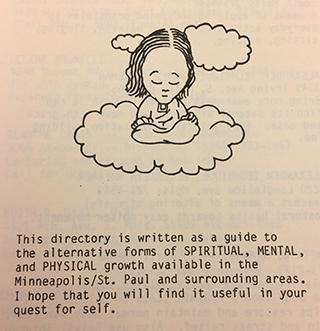 MinnPost photo by Andy Sturdevant
The frontispiece for the directory

Each of the businesses, however, fits the “New Age” description, as it’s broadly thought of, in some way. It’s a mix of health food stores, doctors, yogis, tarot readers, religious organizations, herbalists, nutritionists, booksellers, massage therapists, musicians, chiropractors, writers, psychics, therapists and other multihyphenates that share two characteristics: They possessed some interest in what you might call spirituality, and they made their living somewhere in the Twin Cities in the early 1980s. Schneider herself sums up the scope of the work in a quick introduction: “a guide to alternative forms of SPIRITUAL, MENTAL and PHYSICAL GROWTH available in Minneapolis/St. Paul and surrounding areas.”

I came across this slim volume in the archives of the Minnesota Historical Society earlier this year. Nineteen-eighty-four is somewhat early on the New Age calendar; the term itself in the contemporary sense was only 10 or 15 years old at that point, and was just starting to be understood as a distinct outgrowth of certain social movements  of the 1960s and ’70s. The New Age geography of the Twin Cities at the time clearly still has a foot in the counterculture – most of the co-ops and bookstores listed came directly out of the socio-political upheavals of the era – but is clearly its own burgeoning subculture that will become nearly mainstream by the 1990s. Mapping them all, in that interstitial era, I wondered if I might find a pattern in where these listings were located.

Sure enough, I did. If you were on the look out for oils, incense, tarot cards, iridologists, raw vegetables, juices, astrological charts, self-help tapes or Alexander Technique practitioners in 1984, there was only one place for you: Uptown.

If you’re older than, say, 40, this idea probably makes perfect sense to you. Today, the Replacements- and Prince-besotted narrative of Uptown in the ’80s as a sexy punk-rock utopia tends to be the dominant cultural memory, but certainly the old, pre-Apple Store Uptown could do crystals and astrology with the best of them. In fact, even Prince’s neighborhood-defining paean to Uptown mixes in a soupcon of New Age-adjacent philosophizing: “You can set your mind free.” 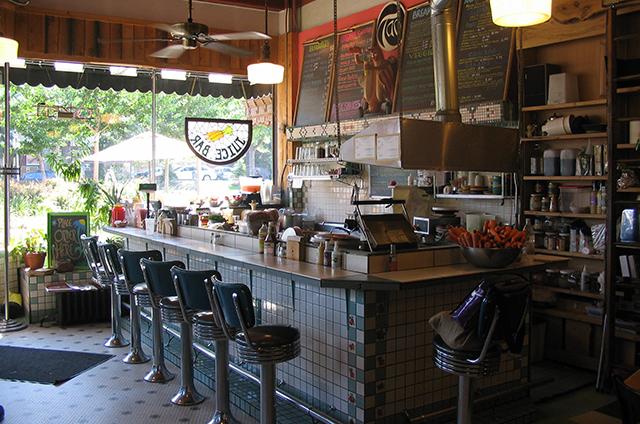 The boundaries of the 1980s-era New Age Belt in Minneapolis can be roughly triangulated between three establishments still extant and thriving in the 21st century: Tao Natural Foods at 22nd Street and Hennepin, the Minnesota Zen Meditation Center on East Calhoun Parkway, and Present Moment Books and Herbs at 36th Street and Grand Avenue. Perhaps a third or more of the businesses and organizations listed in the directory are located somewhere in the vicinity of those three points. Certainly there were other small pockets of New Age sympathies, such as around Grand Avenue in St. Paul, or the West Bank of Minneapolis. Uptown and the surrounding environs, however, have the most. 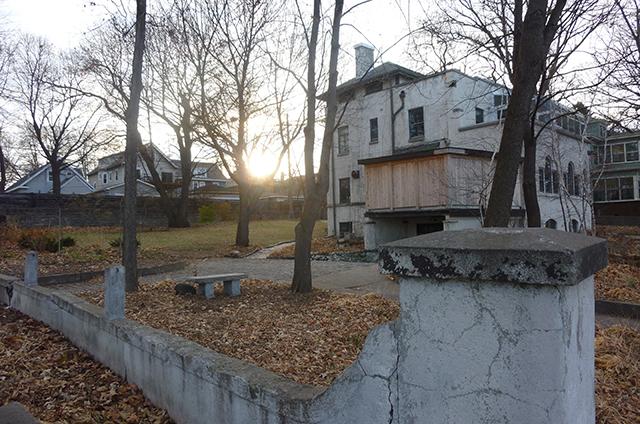 What’s interesting going through the map, too, is how neighborhoods change: Northeast, now home to perhaps more yoga studios per capita than any other part of the city, was a veritable New Age desert in 1984. About the only listing was for Mandala Bookstore at 7th Avenue NE and University. That address lives on today, however, as The Meditation Center.

Some of these names are faintly familiar today, even after they’ve ceased to exist: Amazon Bookstore, located for many years at 26th Street and Hennepin Avenue and America’s first feminist bookstore, lingers in the collective memory. 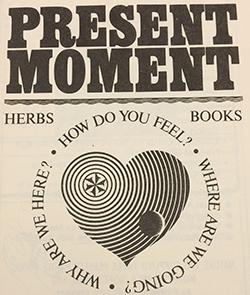 I’ve limited the map to only businesses and business names, for the sake of privacy for the many professionals who were clearly operating out of private, residential addresses. Cursory online research indicates that a fair number of the listed businesses, especially those connected to individuals, are still practicing. Others have passed away in the last five or 10 years, while others have vanished completely. What I love about revisiting small guidebooks like this is the reminder of how ephemeral so much information really is. We think of the Internet as a tool capable of illuminating even the most arcane corners of culture, but a quick trip through the New Age Directory dispels that notion: Professionals like Blue Integrity Seer, whose meridian and chakra therapy practice was located at 32nd and Girard, seem to have disappeared, save a lone mention in a digitized copy of a Kokomo, Indiana, newspaper article on unusual names, hidden behind a paywall.

I was happy to find that Moonrabbit, however, maintains an astrology practice with a very nicely appointed website (“studying, teaching and practicing astrology since 1974,” it points out, meaning that even at the time of the directory’s printing, she was a longtime presence in the Twin Cities community). Like so many Twin Citians, though, she’s made the move from South Minneapolis to St. Paul, and now has her offices on Cleveland Avenue.

There are some wonderful biographies to be found around for some of the people profiled in the directory, however – even those who’ve passed away. One of my favorite listings is for Lynne Burmyn, MA, who ran a business called Womynscope out of a stately stucco house at 27th Street and Humboldt Avenue near Lake of the Isles. She specialized in what she called “feminist astrological counseling and research,” and her advertisement in the directory notes that she uses a Matrix M-65 computer. As far as I can tell, this was a sort of early personal computer specifically set up for analyzing large amounts of data, which would put Burmyn way ahead of the curve on small business computing.

Burmyn died only a few years after the directory was published in 1988, at the age of 44. There are still a number of memorials and tribute to her around the older, text-heavier precincts of the internet, including this one, which is quite detailed. “She put together a study of 1,053 timed charts of Lesbian births,” it reads in part.

In fact, all available information about Burmyn puts her in an interesting nexus between second-wave feminism, early home computing, the broader New Age movement, and the GLBT movement, not to mention the heyday of Uptown as the only logical address in Minneapolis for a feminist astrologer in the mid-1980s. While people may have found the directory useful in their quest for self in 1984, it’s useful today for imagining what walking through that landscape and that community might have looked like.

The nexus of New Age Minneapolis in 1984: Uptown