Stinson Boulevard in St. Anthony Village, a few blocks north of the Minneapolis border, only has a sidewalk on the west side of the street. If you’re walking down that one sidewalk, and you see something across the street you think you might want to investigate, you have to do some pedestrian calculus – look up and down the street, calculate the speed of oncoming traffic, ask yourself if you can get across in time and onto the grass, with no sidewalk awaiting you on the other side. How bad do I want this?

In this case, you certainly do want to cross. There are two cemeteries on Stinson between 29th Avenue NE and 31st Avenue NE, both on the east side of the street. One has been lovingly maintained for over a century by the same Northeast Minneapolis congregation, providing a final resting spot for a close-knit immigrant community and their second-, third- and fourth-generation descendants. This is the cemetery of the St. Mary’s Russian Orthodox Cathedral, established in the early 1900s for the Russian and Eastern European community of Northeast Minneapolis. We’ll be returning there another time.

The other cemetery was established as a free, nondenominational potter’s field for the poor and indigent of the nearby communities, the plot itself forgotten for nearly a century until the neighborhood intervened decades after the last person had been buried there.

I didn’t even plan to look at the St. Anthony Township Cemetery initially – I was on my way to St. Mary’s. In fact, I didn’t know it was there at all. It was a potter’s field established in the 1850s by a prominent resident of what was then St. Anthony, the dominant half of the Other Twin Cities around the falls that eventually united to become the city of Minneapolis. The cemetery does not appear on most maps, and it would be easy to miss walking by. There are none of the formal trappings of a cemetery, in terms of wrought iron fences or elegant signage; it looks mostly like a park, or the feral overgrowth on the back end of someone’s wooded lot. 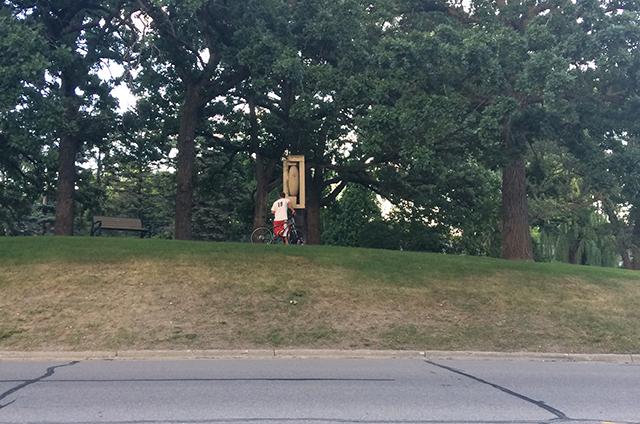 MinnPost photo by Andy Sturdevant
A passing cyclist at the top of the hill.

It’s been hemmed in by development over the years, small tracts with postwar ramblers edging right up onto the boundaries, most of the extant grave markers covered by trees. The site itself is raised up on a hill, which looks a little out of scale with the rest of the surroundings.

What does mark the cemetery formally – and what rescues it from almost total oblivion – is a sculpture on a pedestal at the lip of the hill, by the late artist and architect Elizabeth Gleason Thompson, commissioned and dedicated in 1979 by the city of St. Anthony (with an assist, the plaque reads, from Girl Scout Troop 1586). The sculpture itself, entitled Generation, seems to indicate an idea of a hidden heart, pushed in between the kind of straight, orderly forms one associates with first-ring suburban development. Or it could be something else entirely – this style of abstract, symbolism-fraught memorial was very much in vogue in the public art of the day. 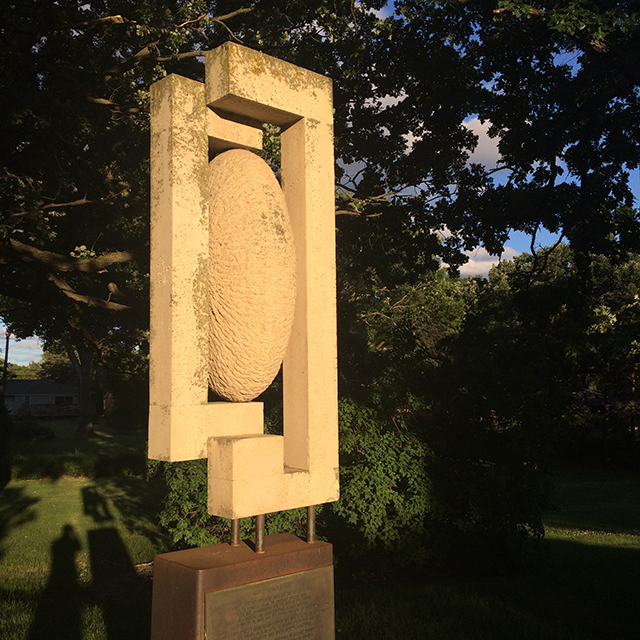 MinnPost photo by Andy Sturdevant
Elizabeth Gleason Thompson’s “Generation.” The sculpture “commemorates the hundreds of persons buried here in one of the oldest cemeteries in Hennepin County.”

Beneath it is a plaque with the full story: Lewis Stone dedicated the cemetery on July 14, 1853, on what was then his homestead land. Its first occupant seemed to have been his wife, Elizabeth White, who died at the age of 54. Stone intended the field to be, according to the text, “used exclusively for the uses of the public as a common and free burying ground forever and never to be used for any other purpose whatever.” I love the awkwardness and sincerity of that edict: forever and never any other purpose whatever.

White’s marker appears to be long gone, but Stone’s request has broadly been honored in the intervening 163 years. The land has never served any other purpose whatever, and hundreds of poor and family-less Minnesotans are buried under the hill, even as the land surrounding it has gone on to serve any number of purposes far removed from a free cemetery. Interments were taking place as late as the 1920s. A project by the St. Anthony Village Historical Society collects some of the names of the individuals buried there: hard-to-place names like Yattau, Ryod, Vinai, Lenke, Daw. Most of them are younger than 40 years old, and probably many died single and destitute, having taken a gamble on traveling to west to make a life for themselves, and ultimately finding no other place to go when that didn’t pan out.

Many of the gravestones have faded, but more than a few are in good shape. One in particular, hidden halfway under some lilac bushes, tells an interesting story: 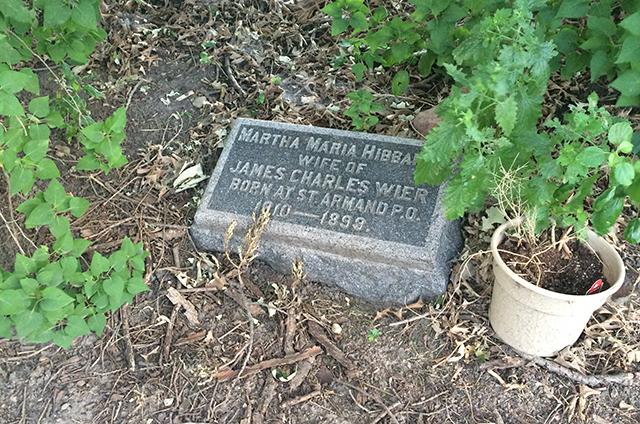 I realize later it actually says “P.Q.,” as in “Province of Quebec.” I find a recounting of Wier’s life story, incredibly, on the Find-A-Grave website, said to have been furnished by Martha’s second great granddaughter. James died out east, and she came west to live with her son and daughter in the Midwest.

What happened next is lost to history, other than the fact that she died here, and was buried in a potter’s field. It’s a sad story, on one hand. The township cemetery may have been considered a pauper’s grave, for those citizens not a part of the close-knit religious communities that had their own resting places nearby, such as St. Anthony’s Cemetery. On the other hand, the headstone is well-appointed, meaning someone still living cared about Martha. The story, too, is an inspiring one looked at from another perspective – Martha is laid to rest under her own maiden name, after 89 years, her place of birth proudly stated. Perhaps she wanted people to know how far she’d come in her nine decades: 1,300 miles from St. Armand, just over the Vermont border and through the U.S. frontier in a covered wagon during a time of massive upheaval. Considering her husband seems to have died in the early 1850s, she may have been on her own for quite a bit of it. It tells the story of a life that, for all it may have lacked in socio-economic stature, made up for with a richness in other areas: independence, autonomy, family.

That’s my favorite thing about cemeteries, that flattening of economic privilege. Historically preserved structures tend to favor the wealthy and the famed. The mansions of a city’s elite remain intact for generations, becoming landmarks in their own right, while the material lives of the poor around them tend to fade away entirely.

This is not the order of things in cemeteries, however, and particularly in modest cemeteries such as the St. Anthony Township Cemetery. The death records provided by the St. Anthony Village Historical Society give a glimpse into the lives of these ordinary people, and into the circumstances of their demises: alcoholism, stillborn, drowning, diarrhea, lung-fever, “want of vitality.” These were difficult lives. 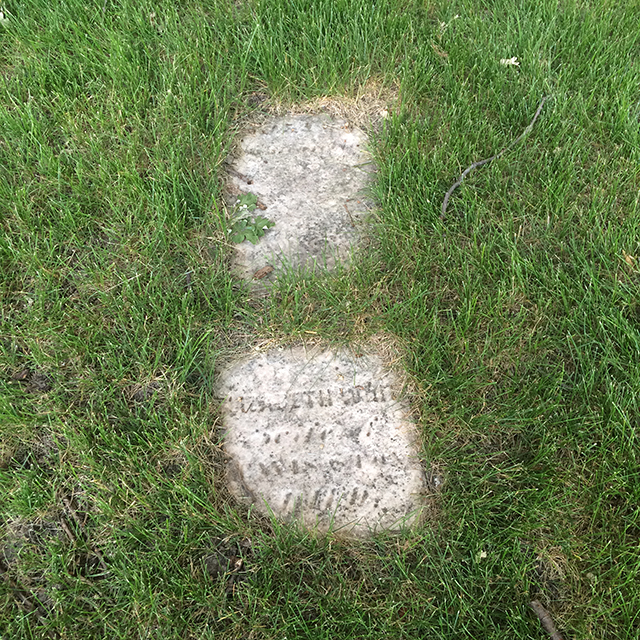 MinnPost photo by Andy Sturdevant
As the song goes: “Oh, there’s one kind favor I’ll ask of you / See that my grave is kept clean”

But the monuments to these individuals remain – against forces of nature, and even against the equally insurmountable forces of apathy. Most of those buried in a potter’s field may not have had family to see them off, and clean their gravesites afterwards. Only a small percentage of the gravesites among which Martha Maria Hibbard was buried in 1890 remain, and many of those have been rendered illegible.

Those that do remain, however, preserve short glimpses of what was important to them just as poignant as the most elaborate Pillsbury or Washburn family sepulcher at Lakewood: military service, places of birth, their relationships to others. “God bless him,” reads the tomb of 11-year-old Henry Hanson, below his dates. It seems almost an afterthought, the more distant “him” standing in for the more intimate “you.” Who is speaking here? A family left behind? We hope so, but very likely it may have been a group of unrelated well-wishers sending off a sickly orphan with the faintest whisper of a benediction. 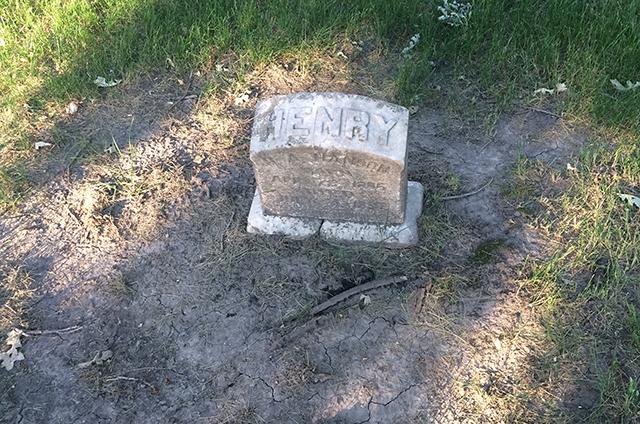 Either way, that short phrase, and all the graves left behind in the cemetery, say, on behalf of the dead: Listen, I was here, and my life mattered.