As the seasons go, so goes The Stroll. Writing this column in the warmer months versus the colder months is a dramatically different experience, as is the general experience of being in the world for anyone engaged in their own lowercase-s strolling around the 45th parallel. In the winter, when there are only a few hours of daylight, everything has to be photographed and cataloged by 5 p.m. at the latest, unless darkness is somehow closely linked to the topic. I save investigations of noted neon signage and interior public spaces for December and January. If I put off going out until the afternoon, I get a photo stream full of dimly lit, grainy architectural details parading through a series of increasingly dark boxes on my iPhone screen.

This time of year, though, I can get off work, go eat dinner somewhere, and still have two lingering hours of daylight left to walk around and take photos, which makes for a very leisurely approach to writing and filing (occasionally too leisurely, my editor might tell you). The summer solstice, passing a week ago last Monday, is the best day of the year for this kind of rambling investigation. The landscape is so different on these mid-June nights, both in terms of how the shadows fall across the physical landscape, but also in how people out there engage with it. A person can grow up in the Upper Midwest, with 9 p.m. summer sunsets throughout the course of their entire life, and still look a little punch-drunk at the wonder of it all, wandering down the sidewalk with a goofy grin on their face that says to any passer-by, Man, can you believe it’s still light out?

I remember a family from when I was growing up headed by a pair of secular-minded scientist/artist parents who made the movement of the heavenly bodies the centerpiece of their private family high holidays with their poor kids, even going so far – as I recall – to drag them out of bed in the middle of the night to observe certain annual astronomical events. No superstitions, no hocus-pocus: just the regular movement of the cosmos in action. I found it very eccentric as a youth, but as I get older, I find the idea of observing the solstices more and more attractive. It’s really something that anyone who believes in the basic laws of the universe can enjoy, from the crunchiest hippie mystic to the most pedantic research scientist.

Which is all a roundabout way of saying to you, the reader, that I wandered up to one of my favorite elevated viewing spots in Minneapolis last Monday to see the summer solstice in action, both above and below, and report my findings. 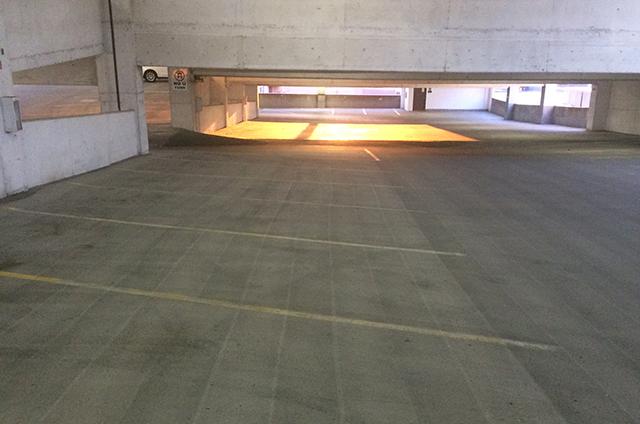 It’s a parking garage on the edge of downtown – I probably shouldn’t divulge the exact one, since you’re almost certainly not supposed to be up there just hanging out. You can’t get up on the roof, but the upper levels are high enough to give a great view of the city, particularly to the west. There are a few high-rise apartments and glass-wrapped buildings that throw enough interesting reflections and shadows across the landscape to remind you that Stonehenge was build to mark the solstice, and the accompanying reflections and shadows. It’s a good view of the parts of the city where the downtown grid shifts, and then fades into the bucolic residential sections of south Minneapolis. It’s so picturesque, in fact, that I took my girlfriend there on our first date. On the night of the summer solstice, there were at least two or three other individuals up there whose primary motive seemed less to retrieve their cars than to watch the sunset, so it’s not like this place is a huge secret. It’s just enough of a secret.

On Monday, June 20, 2016, the sun set at 9:03 p.m., after almost 16 hours of daylight. If you throw in civil twilight, the period after the sun has set but when there is still enough light in the sky to navigate the landscape without the benefit of streetlamps, it inches closer to 16½. Since the sun isn’t as far below the horizon as it is in the winter, the transition from light to darkness happens much less dramatically. When I stood on the High Bridge in St. Paul six months ago to mark the winter solstice, you could measure the darkness minute-by-minute. In the summer, the lights come on so gradually, you barely notice them. 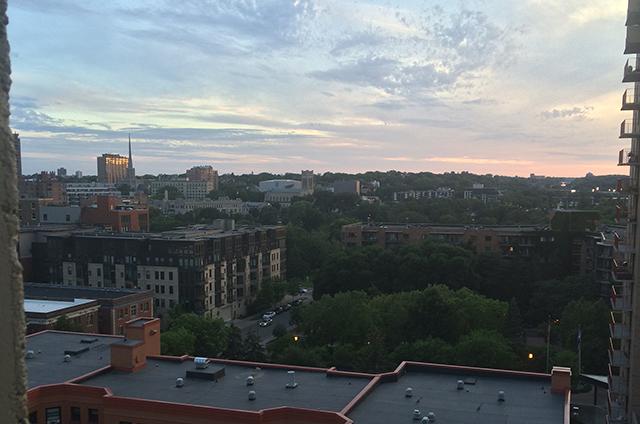 The show in the sky makes the scene on the ground a little bit immaterial, anyway. The way the prairie sky wraps overhead and the pink and purple clouds are shot through with beams of light never gets old. I’ve quoted this line many times in the past, but it bears repeating here: In Meridel Le Sueur’s 1945 history of the state, “North Star Country,” she quotes a 19th century farmer on this very topic: “At night over the prairie we see a splendid mirage, a vast territory arising among us, a village in the air, with hay-cocks like castles, mirrored in the sky with no division between real and unreal.”

Facing west, there are several points of interest that involve illumination. If one were facing downtown, the way the pink and orange light would play off the glass windows in the IDS, just the way Phillip Johnson planned it, would steal the show. Outside of the skyscraper forest, though, some of the higher points are church steeples, peeking up regularly from the cover of the canopy of elms, ash and oaks that cover the neighborhoods. The two most dominant mark the city’s early history, before the Lutherans from Scandinavia came in, and the dominant groups were Yankee Episcopalians and Mitteleuropean Catholics: St. Mark’s Episcopalian on one end of Loring Park, and the Basilica of St. Mary on the other end. St. Mark’s gets its lights switched on early; the tower is illuminated in purple – presumably for Pride Weekend – before I even arrive. Both the Catholics and Church of England had, before the Gregorian calendar, celebrated St. Barnabas Day on June 11 as the solstice, giving rise to the once-popular mnemonic device: Barnaby bright, Barnaby bright, the longest day and the shortest night. The rhyme about Barnaby bright was well enough known, anyway, to have the Minneapolis Tribune print it around the solstice every year until the 1910s. 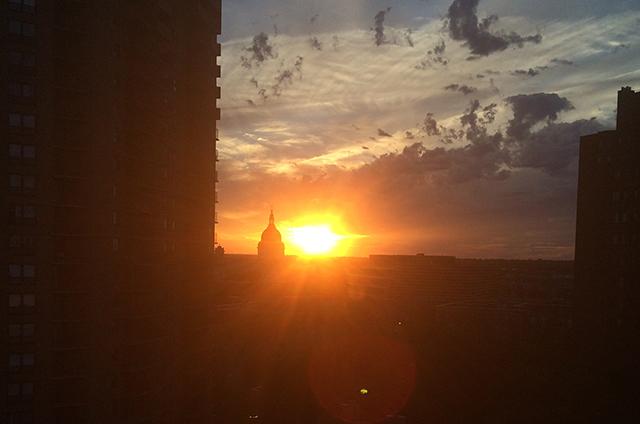 Interstate 394 is just barely visible before the sun goes down, but afterwards, it becomes one of the brightest points on the horizon. A constant stream of cars, with their headlights on, arrive and depart the west metro, which seems to stretch far off into the distance – the red blinking lights from municipal water towers and broadcast arrays begin to separate the horizon from the ground.

The sun sets on schedule at 9:03 – a feat I’d hoped might be marked by an errant bell tower somewhere, but no such luck. The street and house lights across the landscape slowly begin to flicker on, though not as many as you’d think, and certainly not all at once, as in the winter. It happens so gradually, you assume a lot of these apartments in the high-rises across the horizon line must be filled with people who’ve been caught off-guard by the slow dimming on the sky over the course of hours. They’re watching TV or cooking, and look around and realize it’s night. “It sure got dark,” they may say to each other. “What time is it, anyway? It sure stays light this time of year.” 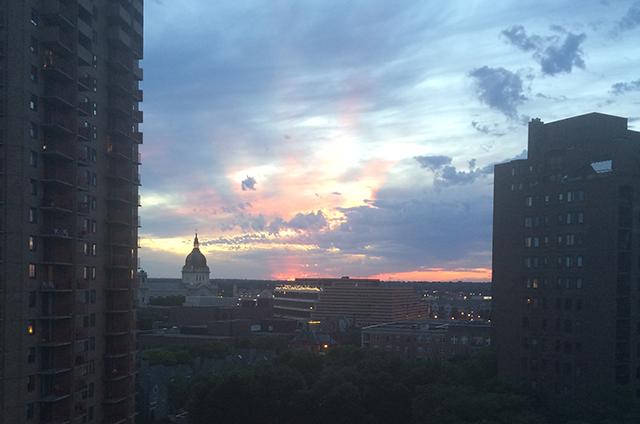 What do I and the other lookie-loos say to each other? Not much. Maybe because it’s because we all know we’re not supposed to be here. At some point, after the pink has faded into a darker purple, the two others in the garage with me figure the show’s over, and wander back on to the street.

It’s a small thing, but marking the solstice from up here, in the quiet company of some other celebrants, seems like a satisfying little civic ritual. On the way out, I have to awkwardly explain to a teenaged employee that, uh, stupid me, I must have parked my car somewhere else. It’s a small price to pay.