There’s not much immediate evidence left of the 1981 Har Mar tornado on the Roseville landscape. The “Har Mar Tornado” is what you’d call it east of the Mississippi. If you were living in Minneapolis at the time, you might have called it the “Edina Tornado,” or the “Lake Harriet Tornado.” It did extensive damage to all three locations, and it’s a grimly amusing testament to the persistent insularity of both Twin Cities that one individual event should have several geographically specific names.

Either way, at about 3:49 p.m. on June 14, 1981 – a little over 35 years ago – a tornado touched down in Edina, almost exactly at 50th and France, tearing the Edina Theater’s marquee off the building. From there, it bounced in a northeasterly direction across the Twin Cities metro, touching down in a number of places – Lake Harriet, Chicago and Lake in South Minneapolis, and, most destructively, near Har Mar Mall in Roseville on Snelling Avenue.

On a recent afternoon, I retraced the path of the tornado through the parking lots, parks and shopping centers of Roseville, looking for any lingering evidence of the event. Of course, most of it was cleaned up 35 years ago, so it’s not like I was expecting to find chunks of siding still lodged into trees. The memory of the tornado lingers in some profound ways – in preparing this piece, I came across more than a few comments in various online forums of survivors mentioning the memoirs of the event that they were working on. Between the 1965 tornados and the 1991 Halloween blizzard, it’s the most enduring late 20th-century meteorological event in our region. I imagined I might find some marker or sign or memorial telling this story.

(A quick aside: The most surprising memorial to the tornado is a certain Richfield-based big-box retail giant, but more on that later.)

The city of Roseville has a pretty extensive and well-researched heritage trail tour map [PDF] on its website. It covers a wide variety of houses and homesteads that are either significant architecturally or to the early history of the town, mostly dating from the time when it was farmland well outside the city. What always fascinates me about these types of maps is that the criteria for “historical” tend to end around World War II. Roseville has a great many notable historical sites relevant to postwar culture – the first McDonald’s in the state, for example, as well the first Target store. These sites, which look today much like any suburban McDonald’s or Target, aren’t actually the original structures, They may have plaques someday, but not yet.

The same goes for the 1981 tornado. There may be some reminders or memorials on the landscape, but I didn’t see any walking along one of the most devastating stretches of the tornado, from near County Road B and Snelling across from Har Mar Mall, past Cedarholm Golf Course and Central Park to the residential neighborhoods at the intersection of Terrace Drive and County Road C. 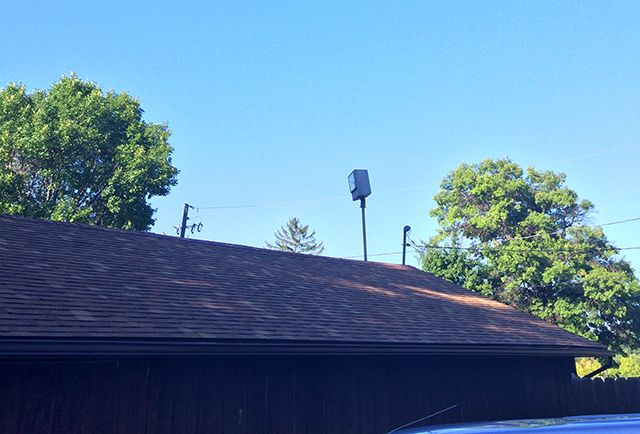 MinnPost photo by Andy Sturdevant
When your morbid curiosity brings you to a city golf course: the maintenance shed at Cedarholm.

Though the tornado vanished about another mile northeast near Rice Street, I decided on Terrace Drive and County Road C as the end point, as this is where a lot of the contemporary news coverage was focused. The neighborhood today looks remarkably undisturbed, particularly when you contrast the landscape today with the utter devastation seen in this contemporary TV coverage from WTCN, now KARE – you can see the same yellow and blue postwar ramblers in that footage from ’81, and match them to the same rebuilt houses along Terrace Drive and Wheaton Avenue today.

Of course, 35 years ago, there were also gawkers like me making their way through that devastated landscape, except they found plenty to look at. In a comprehensive account of the tornado on the DNR’s website, one Roseville resident is reported to have put up a sign in their yard with the following admonishment: “The residents bitterly resent your morbid curiosity. Why don’t you stop gawking and go home?”

I thought about that sign outside some of these homes as I walked down the middle of Terrace Drive with an iPhone, taking pictures as I went. How much time has to pass before a traumatic event ceases to be a morbid curiosity, and becomes a mere historical curiosity? Thirty years? Fifty years? A hundred? Would I – or the people living here now – be better served by a small sign commemorating the tornado’s path here? Maybe, maybe not. 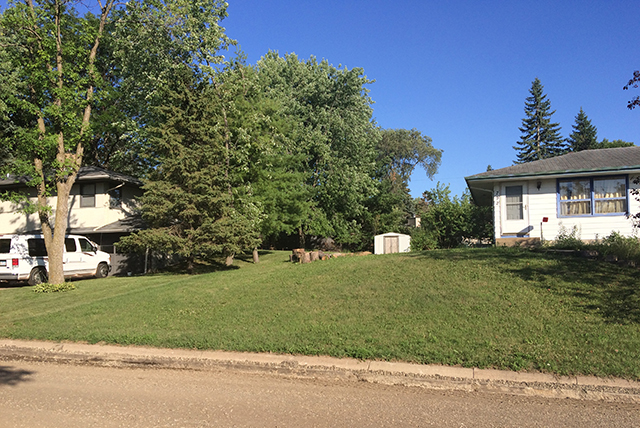 MinnPost photo by Andy Sturdevant
Houses on Terrace Drive, ground zero for the 1981 tornado, as they appear today.

As noted, the commemorations on the landscape are largely invisible, or unmarked as such. The Frank Rog Amphitheater, in Central Park, is named for the longtime Roseville Parks and Recreation director, who spearheaded the creation of Roseville’s Central Park in the late 1960s. Less than two decades later, Rog then spearheaded that same park’s redevelopment after the tornado leveled the majority of trees in 1981. An initiative called Replant Our Roots, consisting of hundreds of Roseville residents and a few dozen local businesses and organizations, stepped up only days after the tornado and set about replanting the park’s trees. Walking through Central Park today, it doesn’t necessarily occur to you that the trees look younger than you might expect unless you knew the background.

I did have a hot tip that some of the structural damage was still visible, a generation later, on the maintenance shed at Cedarholm Golf Course, but after a few minutes of creeping around inspecting the rustic siding of the structure, I began to feel like I really was embodying the concept of morbid curiosity. Maybe best to lay off.

(By the way, readers: If I did miss some formal commemoration along the tornado’s route in Roseville, please let me know in the comments.)

So we end our walk in reverse chronological order, across the street from Har Mar, which bore the brunt of the damage, though there were no fatalities among the shoppers. The 1981 tornado was right at the dawn of Doppler radar, and it was among the first opportunities for a more contemporary iteration of our legendary Minnesota Weather Industrial Complex to jump into high gear. The alarm had been sounded at 3 p.m. and the local TV stations were on the case, so by the time the tornado had sliced its way across the metro, most people had made their way to safety. The majority of the 83 injuries were in Roseville. The lone fatality was a 20-year-old man near Lake Harriet.

The shopping center across from Har Mar on Snelling now houses a clothing store, sub shop, carpet supplier and, at the far southern end, a Caribou Coffee. Thirty-five years ago, another tile shop was holding down the north end, and the southern end was occupied by the Sound of Music, a small hi-fi retailer with seven other small stores around the Twin Cities. The roof of the entire building was sheared off, and the contents of the stores were nearly wiped out.

In a testament to, variously, the dogged perseverance of the American small businessman, the enduring power of a good sales gimmick, the Golden Age of the low-budget local television commercial, and the vagaries of the technology retail landscape, the owner of Sound of Music, Dick Schulze, hit upon a good idea. Channeling Winston Churchill’s admonition to never let a good crisis go to waste, Schulze offered the water-damaged goods to the public at a steep, steep discount – a buy that was so good, one might describe it as the best buy. He didn’t call it that, though. He called it TORNADO MADNESS. 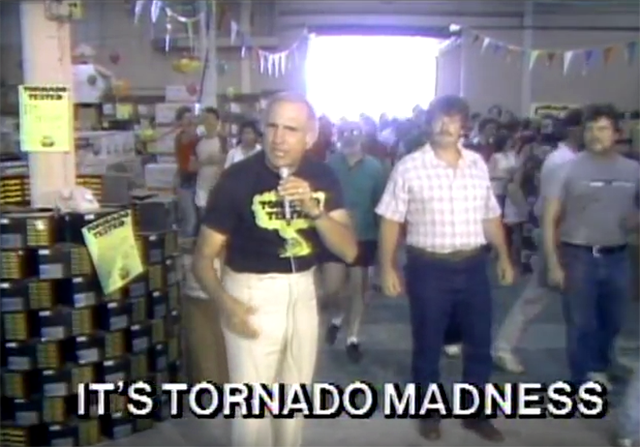 People loved it – lines went all the way down Snelling for buyers looking for a deal. Reinforced by the gloriously unself-conscious type of ads you don’t see much anymore – T-shirts and signage boasting that the merchandise was TORNADO TESTED!, with a little cartoon twister going by – Schulze recreated the original sale once again at the State Fair, and once again to blockbuster numbers. A way to move out of the slowly atrophying hi-fi sector, the new model for the business became selling a mix of audio-visual and home appliances, all deeply discounted. These were offered in a setting stripped of the preciousness and fussiness of a mom-and-pop shop, moved instead into a warehouse-like setting you might describe as looking like, well, the aftermath of a disaster, where all the shelving decoration had blown away and you were left with just the goods.

You probably see where this is going: Within a short period of time, Schulze had remained his business Best Buy (not Tornado Madness, sadly), and they became one of the largest sellers of appliances in America. The Best Buy model emphasized concrete floors, fluorescent lighting, all the backup stock right there on the floor.

This story of how a small independent suburban shop pioneered a new business model by going into permanent crisis mode is one of my favorites in the annals of local capitalism. It’s so weird and audacious and unexpected.

The front of the Caribou Coffee, alas, doesn’t note any of this. But there is a Best Buy nearby, and seeing that blue façade loom over the other side of Highway 36 is maybe a good enough memorial to how the landscape can be reshaped by the natural world in very surprising ways. While bitter resentment fades over time, and morbid curiosity eases into something safer, the landscape still bears the marks of the forces that have shaped it, if you know where to look for it. 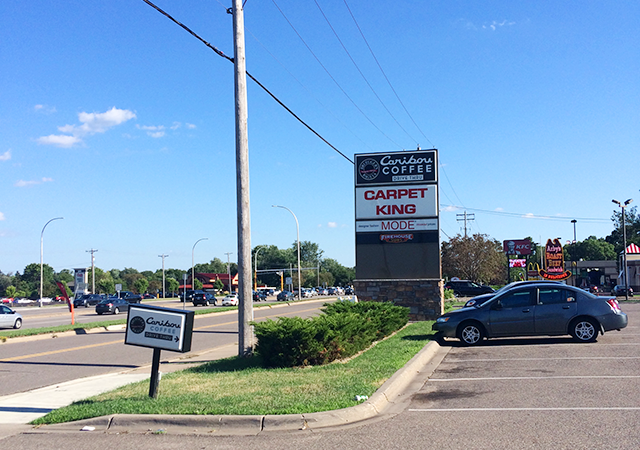 MinnPost photo by Andy Sturdevant
A good buy? No, the best buy. The onetime site of Sound of Music.