The typographic landscape of the contemporary city remains, against all odds, a cacophony of styles, typefaces and degrees of tastefulness. Certainly Helvetica, the reigning heavyweight champ of modernist type design, has dominated this landscape for the better part of half a century. To this day, it remains the basic go-to typeface for companies wishing to convey authority, taste and dependability. Some of our homegrown multinational corporations here have used it for years: Target and 3M, for example. That Swiss precision lends both their logos a certain ’60s-era technocratic sheen. A walk down any busy street in the world will yield countless examples of Helvetica and its serious-minded cousins.

However, there’s so much more out there. “One of the silent threats of multinational consumerism – every high street the same, the trend that ushers us into a buzzing chain restaurant with the same font on its awning as the one that ushers us into a funeral home – has not yet overtaken New York,” writes Simon Garfield in his book about typefaces, “Just My Type.” The same is true not just for New York but also for the majority of American cities. A wide range of typographical options are available to the contemporary sign maker, and most of those options are taken advantage of.

You may, if you’re a certain type of design-focused person, have your own favorites you enjoy spotting in the wild: Maybe you enjoy the perversity of finding an example of Comic Sans or Papyrus in a coffee shop or on a chiropractor’s sign, or maybe you’re into Futura, Gotham or Microgramma, the typefaces made famous by the likes of Barbara Kruger, Barack Obama and Star Trek, respectively.

There’s one in particular that’s less appreciated than those, and one that I am always sure to keep an eye out for. That typeface is Windsor, created in a foundry in Sheffield, England, in the 19th century, and beloved by a certain type of small business, restaurant, nightclub, countercultural purveyor of goods, and loopy none-of-the-above commercial entities in the century-plus since.

Windsor has been a pet obsession of mine for years. It’s the perfect typeface for typographical scavenger hunts: very distinctive, and not too common, but common enough that you can find examples of it regularly. Once you get the hang of its most distinctive features – the splayed legs on the “W” and “M,” or the diagonal cross-strokes on the lowercase “a” – you’ll never be able to stop seeing it.

I still take a picture of most examples I come across while out in the world. I’ve seen it on the sides of plumbing trucks, in advertisements for health spas, and gracing off-brand frozen burrito packaging in corner stores. A display typeface meant to be used in large displays and logos, it manages to scale legibly while still retaining a slight hand-made quality to it. You may have mistaken it for something like Cooper Black, the ’70s-era typeface found on a million iron-on T-shirts. While Windsor can look similarly dated in certain contexts, I find it to be a more versatile and less easily stereotyped typeface than Cooper Black, distinctive and a bit eccentric in a much more subtle way. One online font database describes its “overall effect” as one of “friendliness and warmth.” While this is certainly true, lots of typefaces can be said to be friendly and warm – in the case of Windsor, that friendliness and warmth is tempered by a certain attractive eccentricity. Windsor is like your favorite aunt, the one who used to live on an ashram, wears vintage cat-eye glasses and has a rent-controlled walk-up apartment filled with foreign-language poetry anthologies.

You’ve most likely seen Windsor yourself, particularly if you’ve seen a Woody Allen film since 1977. Since “Annie Hall,” every Allen film has used Windsor in the opening credits. There’s no shortage of online appreciations of Woody’s use of this particular typeface, the most comprehensive one being here. In a short appreciation I wrote several years ago, I noted that “he began using it in the 1970s, when it was a much more common typeface, and was visual shorthand for a certain cosmopolitan deadpan quality prevalent in that era.” The most famous examples, besides Allen’s movies, are tied to that era: The Whole Earth Catalog, and the opening and closing credits for “All in the Family.”

It’s that “cosmopolitan deadpan” quality that still carries over into the 21st century. It’s a throwback typeface, for sure, but it was almost certainly considered a throwback itself in its ’70s heyday – a typographical nod to the 19th century, the kind of lettering you might have seen in “adverts pasted on to the sides of buildings in London or New York a century ago,” according to The Guardian.

The businesses that use Windsor today share a few similarities. For one, they’re older, maybe with a foot in the 1970s, if that’s when they opened. They’re usually independent-minded, and maybe the slightest bit disreputable, but not in a seedy way. Walking around downtown Minneapolis, it turns up in a couple of notable locations. They are certainly more, so please feel free to chime in in the comments section if you know of any. 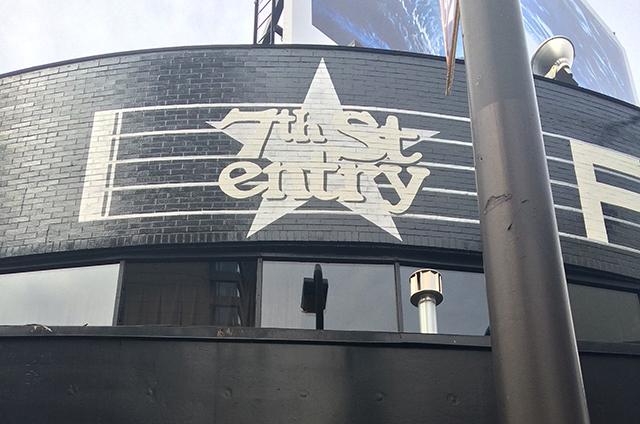 MinnPost photo by Andy Sturdevant
Grittiness and glamor on the 7th Street side.

Most prominently, Windsor is the original typeface used for the “7th St Entry” signage at First Avenue. Though some designs used for the 7th St Entry logo have changed subtly over the year, it’s still used in the façade. In this sense, it’s a link to the club’s 1970s. First Avenue, in its current iterations, opened in 1981, though the 7th St Entry moniker had been in use during the 1970s, as well. 1981 was the same year one of the most famous nightclubs in the world closed: Max’s Kansas City in Manhattan, the nightclub and restaurant frequented by the likes of Andy Warhol and Patti Smith in the 1970s. The Max’s logo was ubiquitous at the time, on T-shirts, in band photos and on album covers. I imagine the 7th St Entry logo was a subtle but conscious echo of that design – a validation of the new club’s urban credibility. “Friendliness and warmth,” sure, and maybe a light buzz from a few Seven-and-Sevens and a dollop of pre-modern Old New York grittiness. 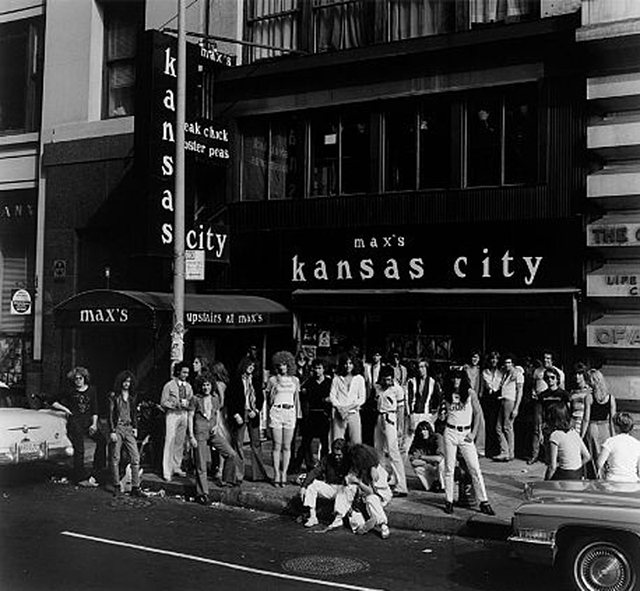 Grumpy’s Bar & Grill on Washington Avenue has also made good use of Windsor, particularly in the back patio area. There’s a neon sign – the only such example of Windsor in neon I know of – that proclaims the “Bar & Grill” part of the name. The best part of this particular sign is the use of the ampersand, which is particularly distinctive. The arm swoops up dramatically, adding an extra hand-drawn flair. Again, Windsor works well for certain types of bars, especially those that suggest the type of rock-musician-and-artist hang-out spot embodied by Max’s. 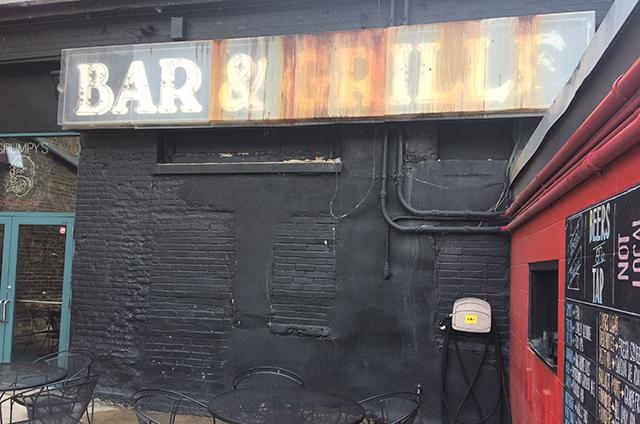 MinnPost photo by Andy Sturdevant
Take a look at that ampersand. 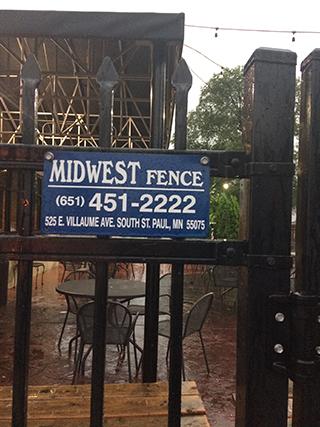 MinnPost photo by Andy Sturdevant
Windsor Condensed, brought to you by Midwest Fence.

In some cases, Windsor can be used to convey not that faded ‘70s grandeur, but a more general sense of heritage and experience. You’ll find it all over town (and in a few spots downtown) on nameplates for Midwest Fence, based in South St. Paul. Noting on their website that they’re the oldest and largest fence contractor in the Midwest, Windsor here is less prickly and corporate-looking than a standard sans serif typeface might look. Midwest Fence’s roots are in the immediate postwar era, but the signs convey something a lot older, closer in character to a 19th century mercantile operation in terms of reliability and affability. These aren’t faceless corporate Helvetica automatons putting up your new fence. They’re friendly guys and girls just across the river in South St. Paul. 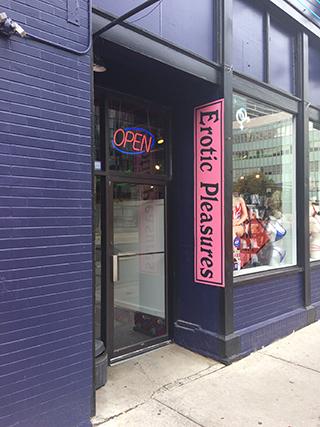 There are not many display typefaces that could be used for both a suburban fence contractor and a downtown sex shop, and still make sense in both contexts. Windsor covers these extremes, and quite a bit of territory in between: the overlooked, the scrappy, the eccentric, and the self-consciously retro. It’s my favorite part of the typographical gumbo that is the contemporary urban landscape, and one that I hope is a small part of it as long as there are independent businesses with a visionary signage program and a slightly off-kilter sense of fun.

Windsor: A ‘cosmopolitan deadpan’ quality carries this throwback typeface into the 21st century