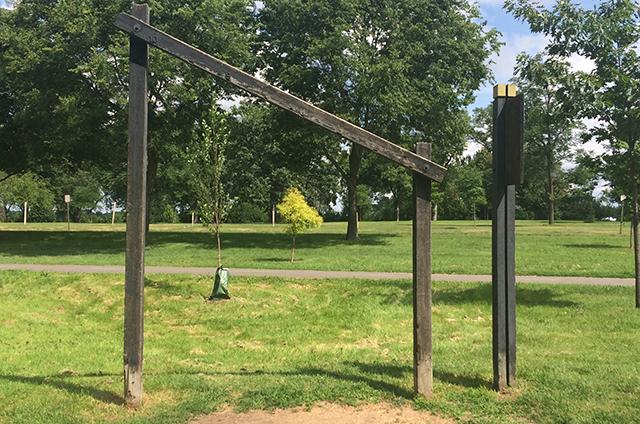 MinnPost photo by Andy Sturdevant
On the east side of the lake.

“What makes a run around Lake Nokomis memorable,” writes Gretchen Kreuter in her 1980 guidebook “Running the Twin Cities,” “is its Vita Fitness Course.”

Thirty-six years later, the word “memorable” isn’t one you’d apply to a fitness course of this kind. If you’ve never noticed the Vita course at Lake Nokomis, you’ve seen one much like it somewhere else – in another park, or in a playground, or nearly anywhere else in North America or Europe. There are a number of hewn, dark-stained wooden and metal stations along a trail, usually rustic in aesthetic, each requiring a participant to do a certain exercise several times. Sometimes it’s parallel bars; sometimes it’s an incline of some kind for doing crunches, or a bar for doing chin-ups. We had one in the park by the house where I grew up, and if you lived in an American city or suburb in the 1980s, so did you. The sort of fitness infrastructure is so embedded in the landscape that it’s nearly invisible.

They’re a fairly recent development, though. They’re called Vita Courses, but are also known as fitness trails, parcourses, or, in French, parcours. Vita course is a generic term now, but they’re named for the Swiss life insurance company that first commissioned them in the late 1960s. (In fact, “vita” is lowercased in the Minneapolis Park Board’s description of the course.) Informed by the “natural method” theories of early 20th century French physical educator Georges Hébert, and designed by a Swiss architect named Erwin Weckemann, these courses were built along nature trails and autobahns throughout the 1970s. Their placement in parks and along lakes was meant to give participants in the nascent athletic pursuit called jogging some diversions along the way. They also gave tired motorists an opportunity to get out of their Citroens and Opels and stretch for a few minutes (resulting, presumably, in fewer payouts on the part of Vita’s auto insurance division). The first was built in Zurich in 1968, and according to a Time Magazine profile, there were already hundreds in Switzerland and elsewhere in Western Europe by 1972.

It wasn’t long before they came to America. The first Vita course was reputedly a course in the Presidio District of San Francisco, or possibly in Orofino, Idaho, by a Forest Service employee. Hundreds more popped up around the country in the ensuing years, including one named for and dedicated with great fanfare by Bruce (now Caitlyn) Jenner in suburban Chicago in 1977. 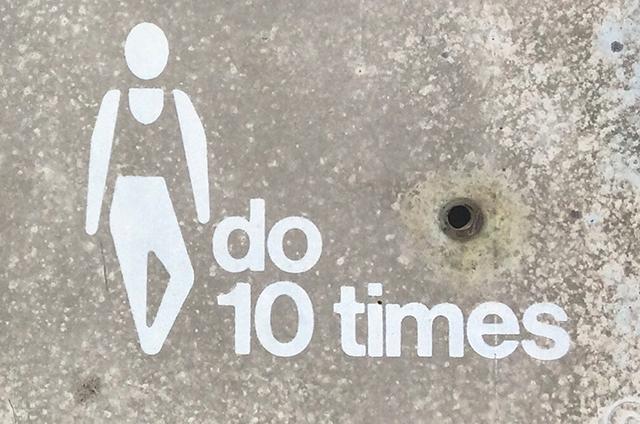 MinnPost photo by Andy Sturdevant
Do what he says.

The course in Nokomis Park came into being during this wave. Manufactured by Landscape Structures of Delano, Minnesota, who are also responsible for much of the playground equipment in the Twin Cities, the Nokomis course is both the oldest in Minnesota, and is the oldest surviving (the age of the trail is self-evident, but more on that in a moment). The advantages to such a trail are made clear in an early ’80s-era sales brochure: low cost (only $500 in 1980 dollars for a 20-part, 2-acre course), adaptable, suitable to all ages and abilities, and with “little visual impact on the … environment.” And of course by the late 1970s, running had evolved from niche interest into a serious pursuit by millions of Americans, the nations’ sidewalks, roads and trails filled with aspiring Frank Shorters and Kathy Switzers. Those runners, many of whom were undoubtedly making their way around Lake Nokomis by the early 1980s, could now stop at the twenty Vita Course stations to relive “the old favorites you remember from the Canadian Air Force Exercises you gave up when you started running,” as Gretchen Kreuter writes in her 1980 guidebook.

The Vita course is still there, though somewhat worse for the wear. Perhaps they’ve fallen out of favor with serious runners, dozens of whom passed by the opportunity to use them on the Sunday morning I walked the course. (I certainly didn’t use them, but I’m not one for exercising in public places.) The sole user I did see was a dad whose stroller-bound child goaded him into it.

“Oof,” he said, dismounting from the parallel bar after an admirable attempt. “I’m too out of shape for that.” 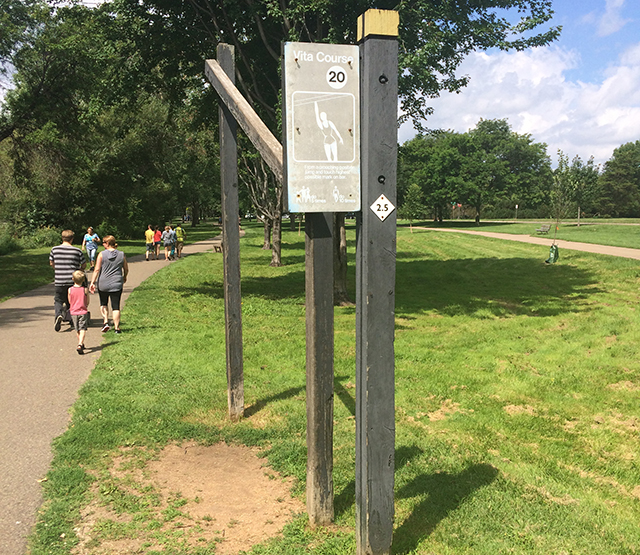 The trail itself was originally 20 stations, each marked with a sign including instructions, optimal number of repetitions, and a helpful drawing of a well-toned, faceless Schweizer in a singlet executing the exercise with flawless clockwork-like perfection. (“You must not permit yourself to be discouraged by these drawings,” adds Kreuter helpfully. Too late!) I counted less than half of the original 20, and while I may have missed a handful of them, they seem to have diminished in number considerably since their 1980 heyday. A 2015 strategic plan [PDF] for the park calls for their eventual refurbishment and restoration to the tune of $180,000.

That original sales brochure was right, though: For all the wear-and-tear, they are very durable, and don’t seem to require much maintenance. Any runner could jump into action immediately at any of the remaining stations without worrying about the station’s stability. They really do blend into their surroundings, as well, to the point where it’s very difficult to imagine how novel a Swiss-style obstacle course might have seemed in a city park in 1980. 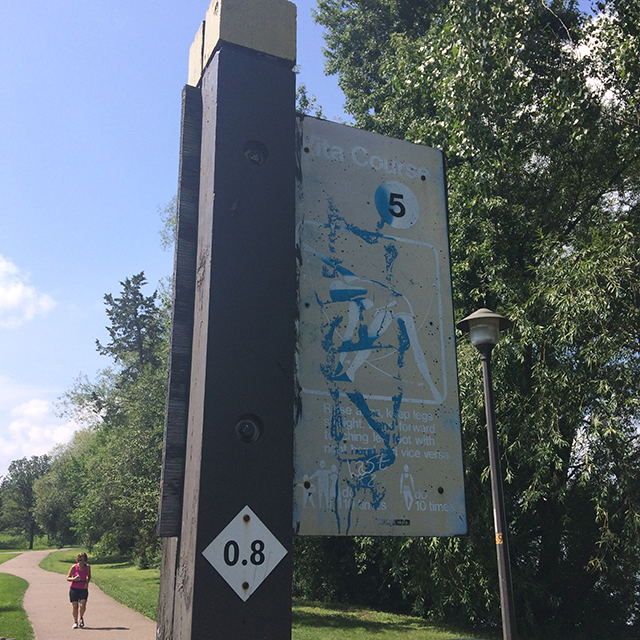 What’s most charming about them is the original signage, which against all odds remains mostly legible. Though they’re partially faded and some are defaced, the instructions are still clear enough on the majority of the stations. In terms of design, these might be the most perfectly Swiss objects in the Twin Cities. Besides the heroic, featureless Jumping Man (springen Mann / homme sautant / uomo che salta), each signage gives you options. For example, five repetitions are recommended for a small family, and 10 repetitions for the more accomplished athlete, whose seriousness is denoted by a track outfit. These instructions, of course, are conveyed in that most modern of Swiss typefaces, Helvetica. They’re marked, in white diamonds, with their distance from the first station. Sadly, these distances are measured in miles and not in kilometers, but otherwise, there is an amiable Continental functionality to these signposts. 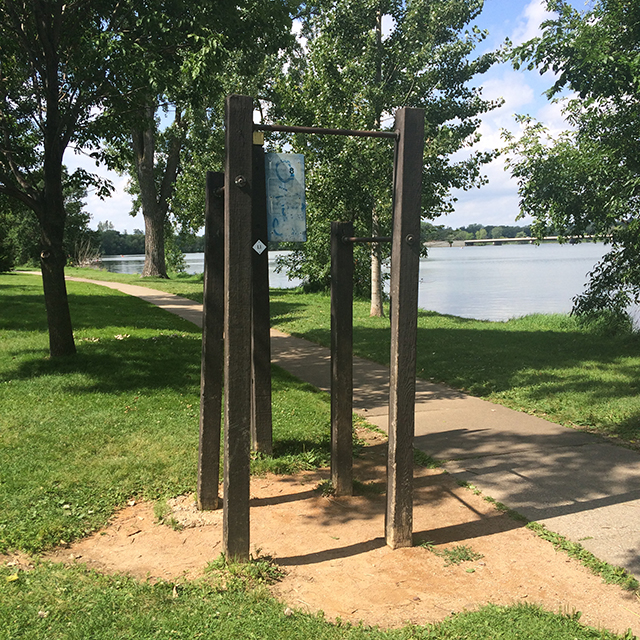 MinnPost photo by Andy Sturdevant
Some dads are too out of shape for this.

The city’s parks were created for, among many other reasons, the promotion of health. “Every boy and girl that gains health of body and mind within our playgrounds — every one of these can proudly say, ‘These parks are mine; I am joint owner of all these splendors,’” wrote a parks commissioner in 1915. The Vita course at Nokomis is an interesting reminder of how the particulars of achieving that healthfulness have changed over the last century. What was it about the ’70s and ’80s that made methodical exercising in public so appealing, in a way that it certainly wasn’t earlier, and doesn’t really seem to be today? Maybe it’s the ubiquity of the gym and the personal trainer, or the decline of the military-style “natural method” of exercise, or a general decline in public emphasis on physical fitness, or something else entirely.

As you consider the Nokomis Vita course and its past and future, and how ideas of public exercise change over time, you may find, at least, that it’s a strenuous mental exercise.