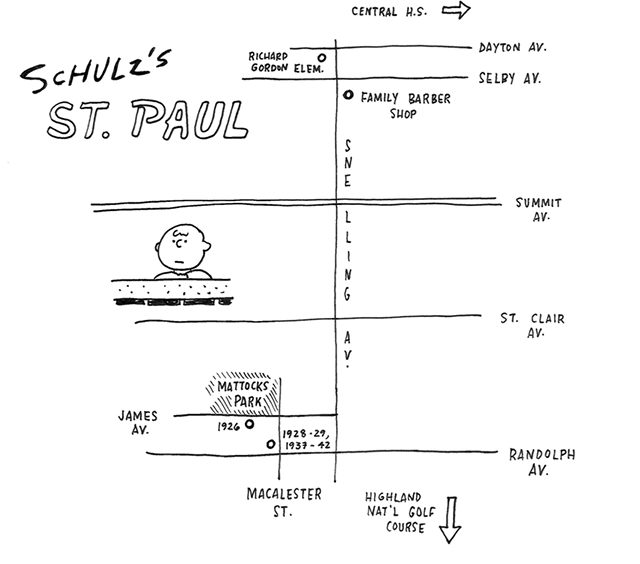 MinnPost illustration by Andy Sturdevant
On any given day, Schulz’s mother was seldom more than a block from where he might be. Like the mothers he would later place offstage in his comic strip, she kept Sparky always in the corner of her eye.

Look at nearly any Peanuts strip published during its 50-year run between 1950 and 2000. Particularly, pay attention to those strips with outdoor settings – the baseball fields, the backyards, the wooden fences, the sidewalks where Charlie Brown, Snoopy, Lucy, Linus and all the others would play baseball, walk to school and debate theology. Particularly in winter scenes, the snow would blanket the landscape in a way that might seem familiar to anyone who’d walked through a residential neighborhood in the northern United States.

Put it all together. The snowy fields, the park and recreation infrastructure, and (most tellingly) the near-ghostly lack of any adult human presence beyond the handful of kids: Such a quiet, lonely and snow-covered residential landscape could only be St. Paul, Minnesota.

Maybe that’s reaching a little bit — part of Charles Schulz’s genius in portraying a world that was just featureless enough to be a stand-in for nearly anywhere postwar kids congregated. When I first read it as a kid in the 1980s, I assumed Charlie Brown and company lived in a mid-American suburb very much like the one I lived in.

Broad though it may be, the world Schulz created for his comic strip is largely based on the landscape he knew growing up in St. Paul in the 1920s and 1930s. Nearly a hundred years later, walking down a street like Macalester, Davern or James, or somewhere like Mattocks Park, still looks like a Peanuts panel.

Charles Schulz – known to most people in his life as “Sparky” — was born in Minneapolis, in the Elliot Park neighborhood. His family’s first residence locally was a brownstone apartment building that no longer exists, located very near the Band Box Diner. His family moved to St. Paul in the 1920s, and with the exception of a short sojourn to California as a child, Schulz spent most of his time within a few blocks of Snelling Avenue in what are now Highland Park, Macalester-Groveland and Merriam Park.

Little pieces of Schulziana are still scattered across that landscape. Obviously, those fiberglass things from a few years ago are still around here and there. I find the way Schulz’s expressive pen-and-ink austerity translates into three dimensions is sort of monstrous, and undercutting everything charming about his artwork, but I suppose they’re a nice gesture all the same. 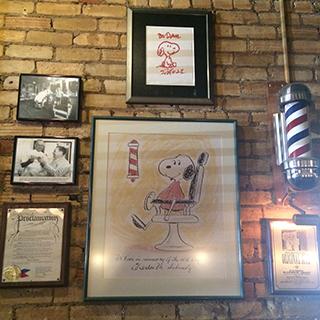 Maybe the best pieces of Schulz-related ephemera in this neighborhood are located at O’Gara’s Bar at Snelling and Selby. Deep in the main room, on one of the walls next to a barber’s pole, there’s an entire museum of Schulz memorabilia, including a plaque, mayoral proclamation, historic photos and some correspondence between the O’Gara family and Schulz. The centerpiece is a framed sketch of Snoopy in a chair, draped in a barber cape. The drawing was an affectionate tribute by Schulz to his father, and a gift from the cartoonist to the O’Gara family, who’ve owned the bar since the early 1940s. “In memory of the old days,” Schulz has written underneath. Note that it’s not the “good old days.” Just “the old days.”

The barber shop celebrated at O’Gara’s was a safe place for Sparky and a place where he could interact with his father and their clientele, but also the origin of some of the neuroses that would color the most psychologically astute of his creations later. “He used to cut his hair so funny that he was never good-looking,” said a contemporary of the haircuts Carl gave his son. “Put a lid on it,” he’d sometimes tell Sparky. “Don’t get a big head.” Proof perhaps that the storied Midwestern taciturnity cuts across cultural lines to include German Catholic families, too.

Decades before O’Gara’s expanded into the space now known as the Shamrock Room in the early 1980s, the building was the center of the Schulz family universe: his father’s barber shop, The Family Barber. Schulz’s father, Carl, was the son of German immigrants who’d worked on a string of Midwestern farms in his youth in order to save money to go to barber school. When he settled in the Twin Cities in the 1910s, he purchased the barbershop with a partner, and then married a Wisconsin-born waitress named Dena he’d met at a pastry shop across the street. The corner of Snelling and Selby was, at the time of the shop’s establishment, known as “go-getter’s corner,” where two streetcar lines intersected between the two downtowns. The family lived in three or four locations in St. Paul over the next two decades, none of them very far from the shop.

The geographic boundaries Schulz’s early life can be roughly delineated between Central High School to the north, where he attended high school and began some tentative cartooning, and Highland Park to the south, where he caddied at the golf course as a summer job. Those are the edges, too – most of it was clustered around near Snelling and Randolph. “Until junior high,” writes David Michaelis in his comprehensive 2007 Schulz biography, “all Charles Schulz’s schools were literally within a stone’s throw of his front door. On any given day, his mother was seldom more than a block from where he might be. Like the mothers he would later place offstage in his comic strip, she kept Sparky always in the corner of her eye.”

In 2000, after Schulz’s death, the arena at Highland Park was renamed for Charles Schulz. A few years later, another interesting tribute was added to the golf course. On the north side of the course, off Highland Parkway, there’s a sand bunker that, when viewed from above, is in the shape of Snoopy. “At first, we thought of doing a Snoopy-shaped pond, but the plans evolved into a Snoopy bunker,” said Paul Miller, one of the designers of the course. “And it works to define the landing area of the hole.” Particularly in the era of Google Maps, when landscapes can easily be viewed from above, the Snoopy bunker is one of the most visible tributes to Schulz in St. Paul. 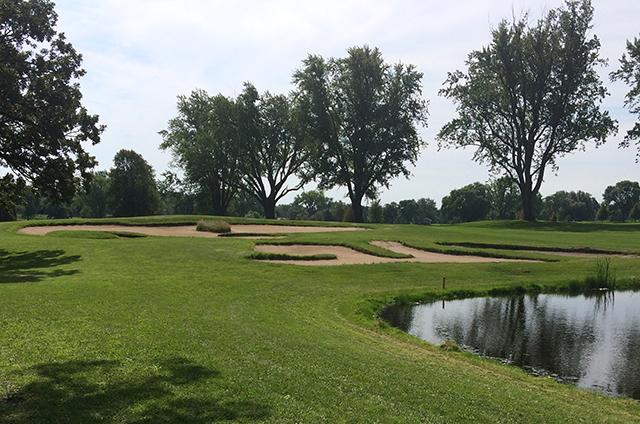 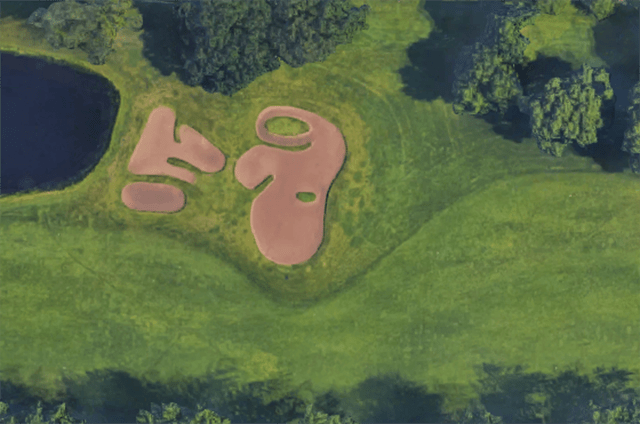 Google Maps
Snoopy at Highland National Golf Course, as seen from the cockpit of a Sopwith Camel.

Schulz is also celebrated in the Hall of Fame at Central High School. A favorite personal detail is that, for many years, the plaque misspelled his name as “Schultz.” I believe it’s been corrected now, but this strikes me as a somewhat fitting tribute to the author of “You Can’t Win, Charlie Brown.” The old Central High School building was demolished in 1980, right about the same time O’Gara’s moved into the old barbershop space, but the present-day high school sits on the same site. 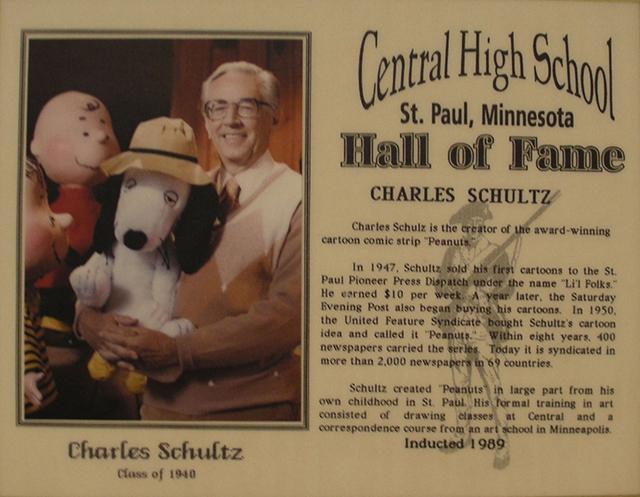 The Schulzs lived above the barbershop for a time, and later on in some apartments on Dayton Avenue near Schulz’s primary school, Richard Gordon Elementary School (the building now houses Family Tree Clinic). The houses where he spent the most time are on the same block, at 1680 James Avenue, 1662 James Avenue, and 473 Macalester Street. (The family doesn’t appear in city directories at the 1662 address, but it’s listed as an address at the Charles Schulz Museum.) None of these houses is specifically marked or designated, but they appear very much as they might have in Schulz’s childhood. In fact, the house at Macalester Street features a perfect wooden brown fence, the very sort upon which the Peanuts characters would prop themselves upon and discuss the vagaries of existence. 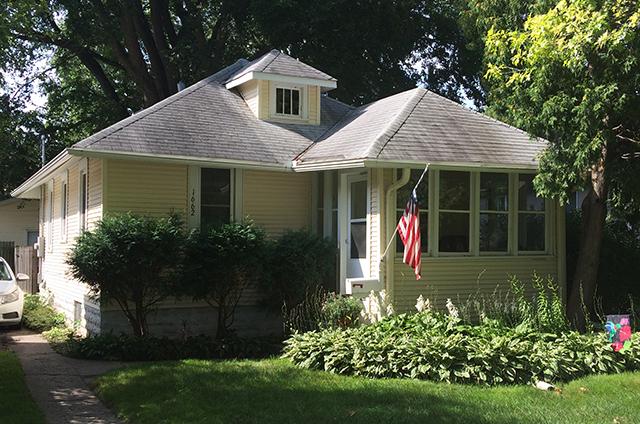 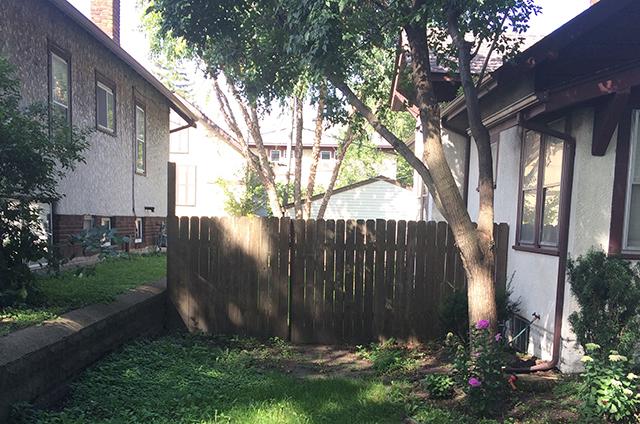 The best tribute to Peanuts is, perhaps, Mattocks Park, right across the street. It looks, as noted earlier, like a Peanuts panel – flat, tree-lined, green in the summer and white in the winter. There’s not a formal football field or baseball diamond in the park, though there are crude, child-created renditions of these facilities. On the east side of the park, in particular, there’s a mound and batter’s plate marked only by the wear-and-tear of children’s feet.

The playground on the west side is very active, but there is a striking difference between it and the world of Peanuts – today, there are adults all over the place, perhaps one for every 1.5 children at play. The world of the cartoon strip, where parents were largely absent (or at so peripheral as to not be seen), is far removed from the parent-dominated neighborhood scene today. 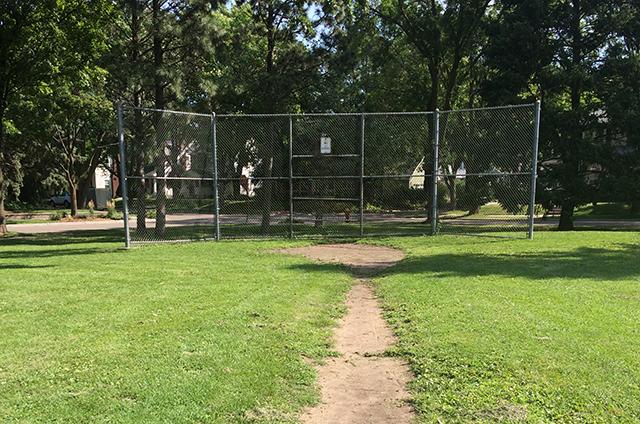 Off the playground, though, the field appears to be well trodden by neighborhood kids, who are undoubtedly engaging in these sorts of games on long summer days. Those relationships, conflicts, conversations and activities that filled Peanuts strips for 50 years that make the cartoon strip one of the great artistic works of the 20th century – footballs being pulled away from kickers, imagined World War I aerial skirmishes, discussions of psychology and metaphysics – probably have their origins on that field.

Note: Additional information about Schulz’s residences on Dayton and James Avenues have been added. Thanks to Jim Sazevich.