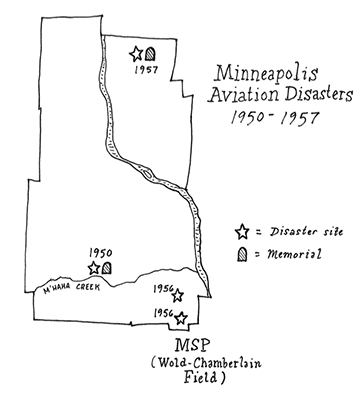 MinnPost illustration by Andy Sturdevant
The sites of the four 1950s aviation disasters.

The worst nonterrorism-related civil aviation disaster in American history occurred on May 25, 1979. American Airlines Flight 191 was departing O’Hare International Airport in Chicago for a routine flight to Los Angeles when the left engine detached from the wing a few moments after takeoff, causing the McDonnell Douglas DC-10 to roll over and then crash into a field about 4,600 feet from the end of the runway. All 271 passengers and crew were killed, along with two people on the ground.

It wasn’t until more than three decades later that a permanent memorial to the accident was constructed in that field. A group of sixth-graders in Chicago, after hearing that their assistant principal had lost her parents in the tragedy, took it upon themselves to begin a fundraising push for the establishment of a memorial. A year after they’d begun their efforts, the students and a group of local and state officials unveiled a short stone wall inscribed with the names of the victims and a memorial plaque. “Let us not forget the victims of May 25, 1979,” it reads, “who helped assure the safety of all who have boarded an airliner since that tragic event.”

It took even longer for a memorial to appear commemorating the Twin Cities’ worst civil aviation disaster – nearly 60 years. By the time it was created, one survivor was quoted as saying to a local television station that the tragedy felt forgotten: “I don’t know why it was forgotten,” said Dianne Doughty-Madsen to WCCO when the memorial was unveiled in 2011, “but it was.” Doughty-Madsen was a child at the time of the accident.

The 1950s saw three aviation disasters in the dense urban fabric of Minneapolis north of what was then known as Wold-Chamberlain Field. On March 7, 1950, Northwest-Orient Airlines Flight 307 collided with a flagpole at Fort Snelling. Damaged, the plane circled back around and smashed into a home off Minnehaha Parkway. Two people on the ground were killed, as were all 10 passengers and three crewmembers. 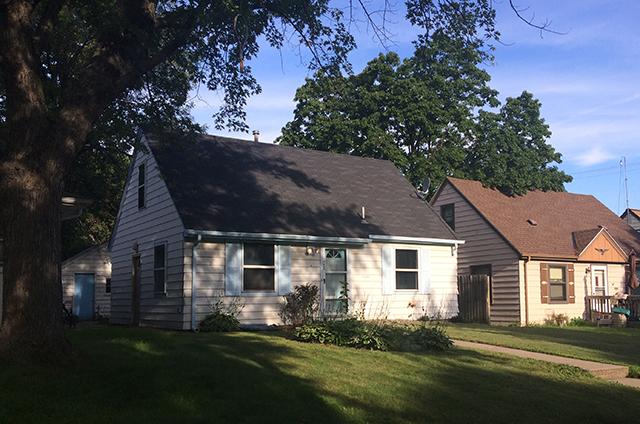 MinnPost photo by Andy Sturdevant
One of the houses on 46th Avenue damaged in the 1956 crash.

Six years later, a pair of military aircraft disasters only days apart rocked the city. On June 5, 1956, a Northrop F-89 Scorpion went down, crashing into a car on the highway near the airport and killing a mother and child bound for the new Metropolitan Stadium. Four days later, a Grumman F9F Panther, fully loaded with ordnance, fell out of formation and crash-landed across three houses on 46th Avenue, causing an enormous explosion and killing the pilot and six people on the ground.

Incredibly, yet a third military aviation disaster occurred less than a year after that, on Memorial Day in 1957 in Northeast Minneapolis. Two Navy planes collided in midair, killing one pilot and setting four houses ablaze near Sunset Memorial Cemetery.

Decades later, these four accidents are seldom invoked by Twin Citians in recountings of the cities’ various civic traumas.

Air traffic over the Twin Cities has long been a major theme of this column, because it’s an experience so closely embedded in the day-to-day experience of life in the Twin Cities. The airport sits between the two cities, a short drive or train ride from most parts of the metropolitan area. The safe and routine presence of civil and military aviation in the skies above is something we take for granted, because in the lifetime of the majority of Twin Citians, there’s never been any reason to think it could be any other way.

That’s perhaps why it’s so shocking to revisit these three disasters 60 years later. The reports from the scenes of all three are nightmarish – in the case of each one, children were among the dead. The landscape of the city near the airport was, as it is now, composed of rows and rows of single-family homes. In the postwar years, those homes were filled with young families. Though the old Wold-Chamberlain Field had been comfortably far out in the sticks when it opened at the dawn of the aviation era, by the 1950s the city had reached right up the fences surrounding the airport. Unlike in other cities, where farmland and fields surround the major airport, Minneapolis-St. Paul is knit tightly into the urban fabric. Any accident over the airport would, by necessity, have a horrific impact on the areas below. 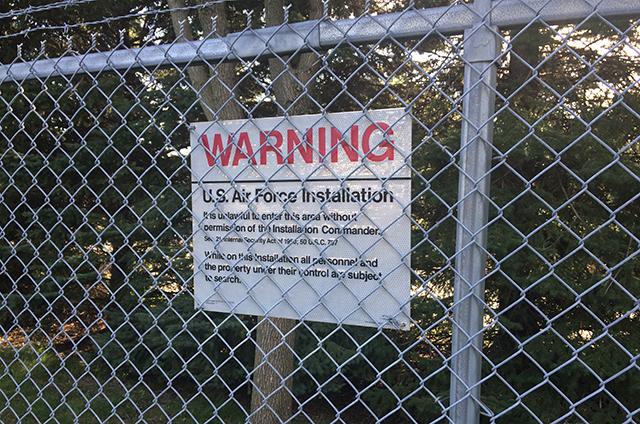 MinnPost photo by Andy Sturdevant
The fence between Morris Park and the Air Force base.

The site of the last of these disasters, a pocket of north-south numbered avenues tucked between Highway 62 and Military Highway on the northern perimeter of the airport, makes this proximity very clear. The streets are a sort of addendum to the city, right up against a high fence topped with barbed wire, and decorated with sternly worded admonishments against entering the area without permission of the Installation Commander. The houses along 46th Avenue were, at the time of the disaster, relatively new – of the three houses damaged in the incident, 5804 and 5808 were built in 1940, and 5820 was a slightly older holdout from the time when the area was farmland, dating to 1918.

There is no memorial to the accident on the site today, and the houses don’t bear any scars of the events of 1956. Even if there were a memorial, it’s the type of site people would be unlikely to pass on their travels through the city, unless they’d made a special trip – it’s only accessible via a frontage road along the Crosstown. As quiet and lovely as the Morris Park neighborhood is, it’s probably one of the most obscure neighborhoods in the city. (It has the shortest Wikipedia entry, anyway.) The area has that quality that neighborhoods nestled in between two giants often have, of seeming hidden away from sight, and maybe preferring it that way. In this case, the Air Force base and the Crosstown create as impenetrable a barrier as any part of the city probably has.

The newspaper account of the morning of the crash is horrifying. “Some 20 or more children were at play in that block when the plane crashed,” notes the writer. “Some of them were littered with debris and flaming fuel.”

“It is just one of those things you never think happens,” a 30-year-old woman whose children barely survived the accident told the paper. You could imagine a resident saying the exact same thing today. 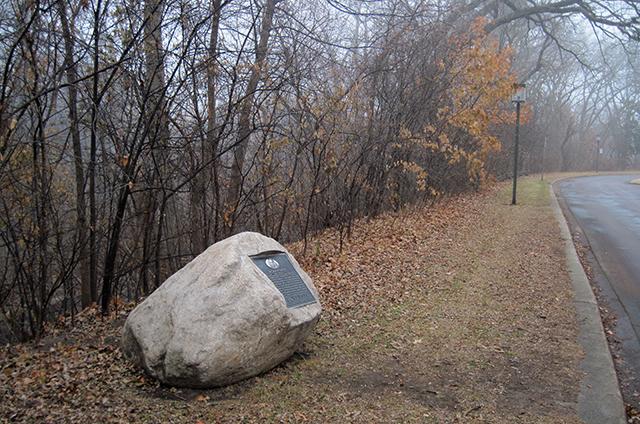 MinnPost photo by Andy Sturdevant
The Flight 307 memorial on Minnehaha Parkway near Dupont.

Five miles west of 46th Avenue, near Dupont Avenue and Minnehaha Parkway, there is a memorial to the airline accident six years earlier. In a boulder placed along the parkway, facing the house at 1116 Minnehaha Parkway West, there’s a plaque recounting the story of the disaster – how a Martin 2-0-2 en route to Minneapolis from Rochester and points east clipped its left wing on a flagpole at Fort Snelling on its approach into the airport, and then going down near the Washburn Water Tower. It lists the names of the 15 people killed that night. 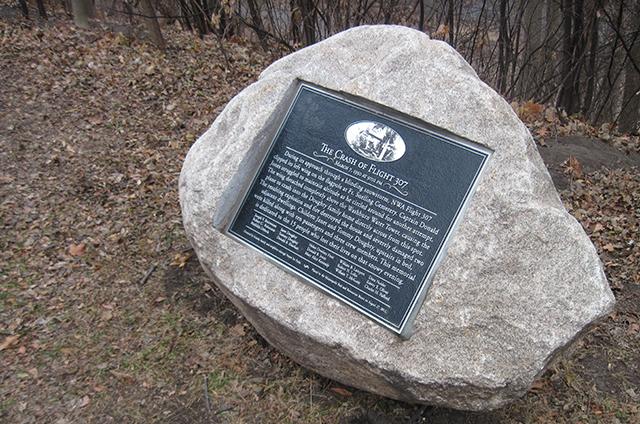 The memorial is in a highly visible part of the city – such a tranquil and heavily used part, in fact, that the thought of a fiery crash there is all the more unthinkable. The memorial was commissioned by a group of neighbors working in concert with People for Parks, and dedicated by the Parks Board in the August of 2011. It is, as far as I know, the only memorial dedicated specifically to an air disaster in the Twin Cities, and one of a lonely few memorializing any sort of disaster. The I-35 bridge collapse memorial and the Great Mill Disaster memorial at Lakewood are perhaps the two most notable, but there are others, spread across the Twin Cities. 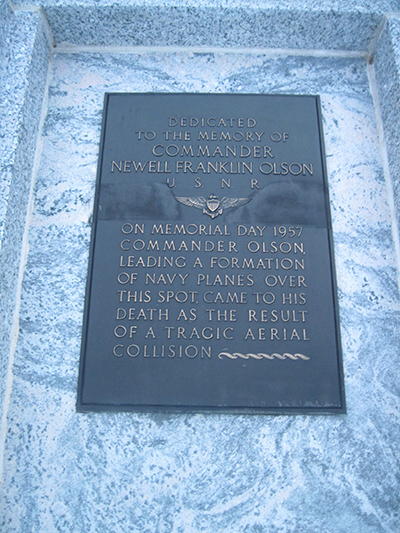 Of the three military aviation disasters recounted here, only the final one has a dedicated memorial. On the Tower of Memories at Sunset Memorial Cemetery, near the site of the disaster, there’s a plaque commemorating Cmdr. Newell Franklin Olson of the United States Navy, the serviceman who was killed on that Memorial Day in 1957.

Air travel, in the early 21st century, is safer than ever. It is a testament to the aviation industry that in the past six decades, accidents of this kind have been largely unheard of in the Twin Cities specifically, and in the United States generally. You wonder, though, what the residents of the Twin Cities in 1957 must have thought of the proximity of the airport, after such a rapid succession of deaths and disasters in 1956 and ’57. You wonder if those buzzing fighter jets and twin-engine props overheard were regarded not with the mild annoyance we might feel today, but with a small, lingering sense of dread.

Whatever doubts those people must have had, however, have long been laid to rest. As the memorial in Chicago commemorating Flight 191 reads, those victims have, in some way, helped assure the safety of all who have boarded an airliner since. Similarly, they have also helped to assure the safety of all of us on the ground below. The memorial to Flight 307 on Minnehaha Parkway, passed by hundreds of joggers, dog-walkers and bicyclists every day, is hopefully the only such memorial our city will ever need.