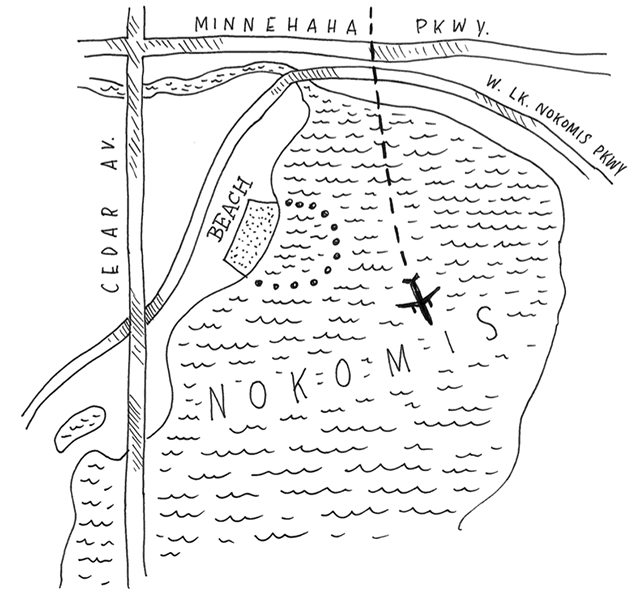 Like pizza, burritos and baseball teams, swimming is one of those topics that people from the coasts get instantly sniffy about when you’re hanging out with them. If you grew up with an ocean, lake swimming seems like an inferior distant cousin, an impossibly compromised and impoverished substitute for the true sublimity of the seaside experience. Lake water is stagnant, they say. There’s no horizon. There are no waves. There’s not the smell of salt in the air.

I suppose those things are true, but lake swimming is fundamentally different – comparing it to ocean swimming is like trying to compare a big, saggy slice of New York-style pizza to a sweet-sauced, cracker crust square-cut pizza you’d find in a wood-paneled bar in the Midwest. Loudmouths will always trumpet the former as the superior variety, but there’s a good case to be made for the latter, particularly when you appreciate it on its own merits.

Having grown up in a part of the country with few lakes and no oceans, swimming culture for me was limited to chlorinated public pools and maybe a backyard pool belonging to a friend with upwardly mobile parents. Consequently, my swimming abilities stunted after age 12, and only recently have I begun to swim again in earnest, thanks to the patient and generous swimming instructors of the Midtown YWCA. This summer, I’ve started making my way from the indoor pool at the Y to some of the lakes around Minneapolis to see what I’ve been missing. I’ve done plenty of sitting on the beach reading, but getting out in the water is an entirely different thing.

It’s a critical part of the Upper Midwestern urban experience, of course. Each city beach has its own feel, and each is great in its own way – particularly the Webber Natural Swimming Pool in North Minneapolis, a topic for another day – but the main beach at Lake Nokomis is the one that, for me, represents the best of the city lake swimming experience. Last week we ran around the obsolescent training equipment, but this week we dive into the lake itself.

My friend Anita, who grew up in Uptown and spent summer days swimming in Lake Calhoun (“my mother Emily took me and my three siblings to the 32nd Street beach … we swam as she read under a tree”), is sort of my guide to Lake Nokomis. “Nokomis Beach is more family-feeling than Calhoun’s, beaches which are more teen culture-driven,” she tells me. “It’s really easy to access. No stairs to walk down like at the 32nd Street Beach. Cedar Point Beach is very nice, but I don’t get that community feeling there that I do at Nokomis.”

“Perhaps the casual physicality of the beach unites it,” she says. “The tree that shades, the crummy table, the grass the sand the water …” There are scenes she depicts in her paintings, which convey the freewheeling, joyous atmosphere at the beach. 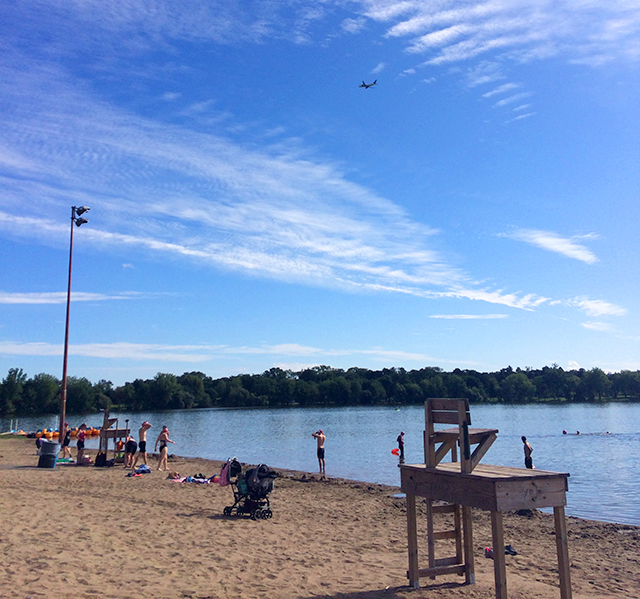 She actually called me from the beach this week, and I asked her who was there at the moment. She gave me a précis of the whole daily cycle: “At the moment – women about my age. There’s a grandfather and son in the water. The rhythm in the morning is pretty much kids and families – a lot of moms. In the afternoon, it shifts, and there are more teens. The evening is more romantic – it’s couples. Being here at sunset is really special.”

Nokomis is open a few times a week for swimmers crossing the breadth of the lake, training for various races, and clad in wetsuits in chillier months. I stay out of their way – so does Anita – but there’s enough of a spectrum of ability and speed in the cordoned-off primary swimming section of the lake that an amateur like me feels OK toodling around between diehard triathletes and toddlers with their moms.

Lake swimming is, from a tactile perspective, something that takes some getting used to. Whatever goes into the lake stays in the lake, and it’s not uncommon to feel something brushing by your arm as you float there. Maybe it’s a feather from one of the ducks nearby. Or maybe it’s an actual duck that let you get too close. Minnows? Or a branch? Whatever – after a while, you stop worrying about it. 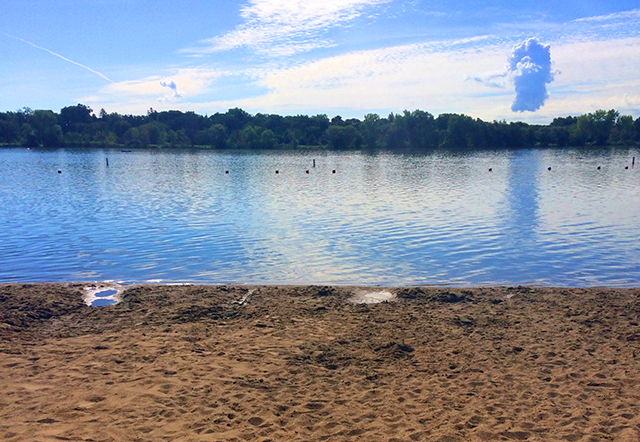 The deeper in you go, and the more time you spend in the water, the more you realize how sensitive the lake is. To call a lake “stagnant” is as perverse as calling a tree “lazy” because it’s not actively moving across the landscape. Like the tree, the lake is responsive to its environment, a monument to slow accumulations over time. There are layers on layers in there – on a sunny day, a current of cool water will rise past you, and then disappear just as suddenly. After a rain, you can almost sense a more buoyant layer of water sitting atop the older layer. The way the surface is affected by wind, or boats, or even other swimmers adds a constant stream of variables that affect how you move across that surface.

A century ago, Nokomis was a marshy, swampy patch of shallow water called Lake Ameila. As the population of the southern part of the city increased, however, Minneapolis put a great deal of effort into creating a focal point for the community. Pictures of the old bathhouse make you a little sad the structure was neglected for so long and then torn down in the 1960s. The current bathhouse is fine, though, even if it does feature the four dumpiest lockers in the entire city – a row of sad, non-functioning steel things that look like they were salvaged from a haunted middle school. But Sandcastle, the new café and vendor at the main beach, has a lot of choices, and it’s a colorful, attractive structure that calls to mind a rustic, pop-art variation on the City Beautiful vibe of the original bathhouse.

As wonderful as all of that is, you belong out in the water. Besides training, you see kids playing Marco Polo, and whatever other aquatic games spring from the minds of youth.

My favorite game to play at Nokomis is Spot the Airplane, insofar as the same consists of no rules other than looking up and thinking. As a novice swimmer, my front crawl has all the grace and fluidity of a runaway garbage truck with manual transmission. My backstroke is pretty good though, and my back float is even better. So when I am tired of huffing and puffing my way across the surface of the water, looking around and realizing I’ve exerted an enormous amount of effort to move two yards, I just roll over and look up at the sky. 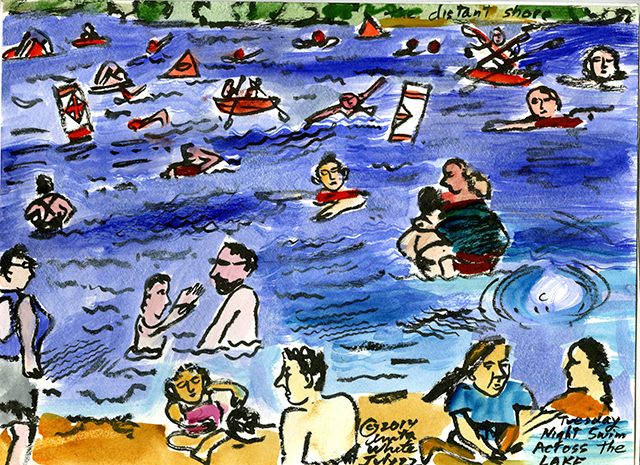 What I see, on a good day, is clouds, of course – those great Plains clouds moving across the sky. But hang around a little longer, and the dominant object crossing your field of vision is airplanes. Airplanes moving surprisingly close to the ground, making their departures and arrivals from and to Minneapolis-St. Paul International Airport, two miles southeast of the beach. After I wrote about airplane approaches of south Minneapolis a few years ago, a reader described overhead airline traffic as a physical manifestation of the invisible forces of global economic power. Maybe that’s something that comes to mind while floating in a lake watching the transfer of human and financial capital across the sky above you – your mind wanders in all kinds of directions.

Less abstract than that, though, is trying to guess the origin or destination of each plane. The smaller planes are probably carrying high school basketball teams, or feed salesmen, or people with families in Sioux Falls or Helena or Grand Island. The larger ones are taking people like your boss or a handful of Target executives or Ricky Rubio to LaGuardia or LAX or maybe even Amsterdam or Frankfurt.

Probably some of those planes are carrying people off to places near oceans, where they’ll inevitably go swimming. Maybe they come back to town, and next time you talk and they ask you what you’ve been up to this summer and you tell them you’ve been swimming at Nokomis every weekend, they make a face and a snide comment about “lake smell.” That’s fine. You know and I how nice a dip in the lake can be, with intermingled layers of warm and cool below you, triathletes and teenagers beside you, and ducks and airplanes above you.

Summer at Lake Nokomis: Swimming among teens and triathletes, playing Spot the Airplane