Heading through the small reception hall into the chilly seating of the Minneapolis Armory for a 1959-60 NBA regular season game, fans know that a lot is missing. After winning five championships in its first six years (1949, 1950, 1952, 1953, 1954), the Minneapolis Lakers franchise is decaying alongside the bodies of its original stars.

By 1960, the Lakers’ dynasty nucleus — George Mikan, Jim Pollard, Vern Mikkelsen and Slater Martin — is no more; all are retired. Clyde Lovelette has left for Philadelphia. Coach John Kundla went back to the college game. Onfloor magic has dried up. The magic of Star Tribune writer Sid Hartman landing a team here, becoming general manager while still writing, dragging Kundla from college and, with Kundla, securing Mikan from another city in another league, is gone. And Minneapolis is quickly losing interest in pro basketball without a quality team to care about.

Inside the Armory, past the ticket takers and event staff, the atmosphere is calm and unsupervised. After seeing how many show up on the winter night, fans sit as close as they please. Staffers don’t keep track of seating or anything. People close enough sometimes grab the jersey of an opposing player as they turn to run the other direction.

Other than the occasional grab and holler, there isn’t much commotion. Fans don’t cheer after every basket, rebound or block. Wildness is reserved for big wins and big disappointments. People come hearing of heralded players and teams and expect herald-worthy action. Applause and cheers are for sustained strategy leading to victory. People mostly sit, smoke and talk. 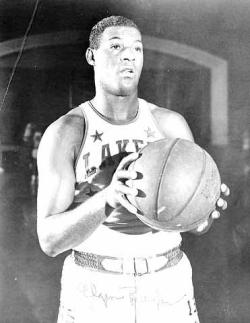 What the 1960 Lakers do have to offer is a singular vision of vitality, strength, agility and the future: Elgin Baylor.

In 1958, the Lakers hit bottom, winning the fewest games in the league four years removed from winning three consecutive championships. The team was awarded the top pick in the following draft and chose Baylor. Mikkelson and Kundla hang on for one last year. Led by the rookie, the 1959 Lakers bounce back with 33 wins and a surprise return run to the NBA Finals. The rookie and the Lakers are swept by Bill Russell’s Boston Celtics.

Come 1960, Kundla and Mikkelson are finally done, officially ending the era. The 1959-60 Lakers finish 25-50. Basketball and the NBA are not a big deal yet. Without winning teams, going to a Lakers game just isn’t worth the night out anymore. After the season, the Lakers head west.

In 2016, a century after he was born and 56 years after the Lakers’ departure, John Kundla sits in his wheelchair at Mainstreet Lodge Assisted Living in northeast Minneapolis. For the professional athlete and anyone, the first signs of aging out of early-adulthood are a real bummer. After a certain point, though, these marks of deterioration seem less as drawbacks, less as weakness begetting more, inevitable weakness, but added obstacles requiring even more strength to overcome. Signs of aging become badges of endurance and grit.

Kundla remembers challenges like building chemistry between star players Pollard and Mikan or slowing down opponents like Bill Russell and Bob Pettit with spunk and startling detail. He may repeat an anecdote or two or mishear a question. But what comes to mind for him some 60 years later brings a smile too bright and lasting for decades to dim. 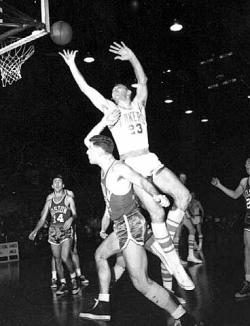 Courtesy of the Minnesota Historical Society
Boston at the Lakers

He is with his son, James Kundla. James went to just about every home game, sitting with his mother in the wives’ and family section. He remembers how fans could easily walk down a couple of rows from their designated seat or close enough to get a little handsy with the players on court. He remembers how the crowd would swell when Russell’s Boston Celtics were in town or during the team’s last gasps with Baylor.

“The fans cheered professionals, how they did things they were expected to do,” James says, “the fans acted accordingly.”

Coach remembers that when the fans did tip over, it could be absolute frenzy. Without staff to even prevent a fan from grabbing a player, the primary security for the game and entire event were the referees. Near the end of one game, Kundla disliked a foul call that sent the other team to the free-throw line. Between the two free throws, as Kundla and the crowd roared with disagreement, one ref, uneasy and unsure of what to do, turned to Kundla.

“He t’eed me up, gave me a technical,” says Kundla. “I say ‘for what?’ ‘For inciting the crowd,’ ” Kundla says the nervous ref yelled back.

But, even as intense as things could get, pro basketball fan culture, and sports entertainment culture generally, was hardly a thing in the state or across the country yet. Neither Coach nor James recalls fans rushing the court after big wins. Players had regular day jobs; basketball was a side gig. Not only were players unable to afford to gallivant through town after home games or on the road, they didn’t have the time or energy. People, players and coaches went to the game then went home.

After the dynasty, Minneapolis fans stayed home. Kundla says part of the deal for the Los Angeles buyers was that the physical banners and everything the Lakers accomplished came, too. With that, all that remains is the Minnesota sports fan, denying access to a reservoir before a drought.

Minneapolis was not interested. The Lakers’ leaving had little cultural consequence. Sports entertainment culture is very much a nationwide thing today. Pro sports teams are now a huge part of regional identity.

Walking around the Armory now, you can easily see U.S. Bank Stadium on the horizon. U.S. Bank Stadium was paid for in large part by Minnesota residents fearing the relocation of the Minnesota Vikings. Hundreds of millions of dollars spent to express a whole lot of cultural importance and consequence.

All of that money and cultural dependence chases what happens on the playing surface. This is all for sporting glory, for a team whose exploits enrich an area like a band of artists or musicians.

The blueprint of pro basketball glory was first laid out in Minnesota, by Minnesotans Kundla and Hartman who brought in players who moved here, understood this place and won for it. Remembering and understanding what the Lakers accomplished here is another way for Minnesotans to see themselves. Minnesota is not the sports world’s nice neighbor typically finishing a bit short. Letting the history of the Minneapolis Lakers go west with the team does not erase the pedigree of five championships in six years.

What does remain, thankfully, is the Armory, even though Kundla says the players hated playing there (“The hard floor gave them shin splints.”). It is the hard, hallowed ground Baylor ran up and down on the way to 64 points and a win past the pacing Red Auerbach and Boston Celtics. The ground where Bob Pettit’s Hawks won while he dropped 33 as payback for the Lakers beating them in St. Louis. 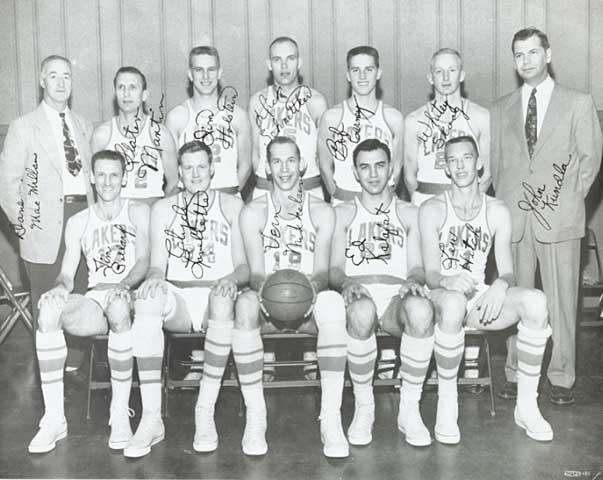 Courtesy of the Minnesota Historical Society
The Lakers with Kundla

Wear and tear can be unsightly in newer buildings and then quant in older ones. The Armory is one of the few Minneapolis relics old enough to have history forgotten or to be quaint. Since being tread on by the forefathers of pro ball, by the gods of basketball’s pearly nets, the Armory has been a parking lot, where engine oil dripped.

Now under new ownership, the Armory will soon be turned into a modern venue. As one walks around it today, though, looking through the broken windows at the early century rafters, the Armory invites imagination of proud Minneapolis banners hanging. Glimpses of proud Minnesotans watching their team win and keep winning.