At some point in the late 1970s, the developers of suburban office parks began thinking, y’know, we’d probably be better off naming office parks for the glens and meadows and prairies we’re building on top of, and maybe stop giving these places names that suggest domed space colonies and Chris Foss paintings. A name that might have seemed futuristic and hi-tech on the front of an office park a mere 10 years earlier had, by the dawn of the Reagan era, curdled into creepy dystopianism.

Opus 2 is an office park in Minnetonka, developed in 1978, located near the northwest corner of the Highway 169 and Highway 62 interchange. It was built as a planned, mixed-use community and organized with a sense of technocratic orderliness into four color-coded quadrants – red, blue, yellow and green. The name Opus 2, typeset as it is in aqua lowercase Helvetica on a molded concrete sign outside the entrance, tells you everything you need to know about the development’s aesthetic priorities. You half expect to come across a billboard advertising Opus 3 as an off-world colony on a terraformed minor planet in the Asteroid Belt. 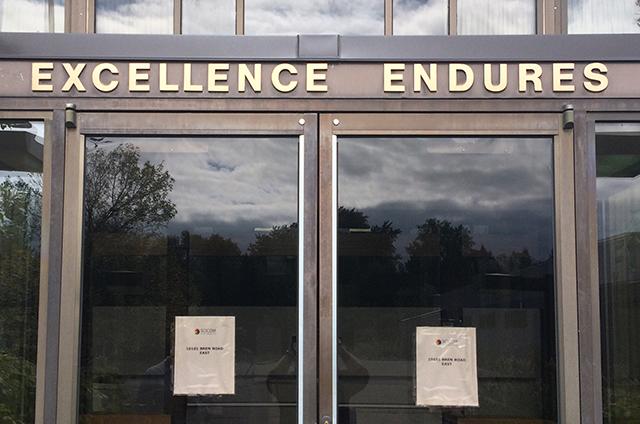 MinnPost photo by Andy Sturdevant
Excellence endures, even after buyouts.

You wouldn’t think of that from the developments nearby that came a little later, with names like Deer Ridge, Meadow Creek and Glen Lake Center.

Opus 2 is not as extravagantly weird as a place like Jonathan, which still bears evidence of its jump-suited utopian founding vision. In fact, you may find a place like Opus 2 very mundane, especially if you’ve spent some time in a similar sort of office park. Maybe you were a kid in the 1970s or ’80s tagging along with your dad on the weekends when he had to go into the office, and you spent the afternoon playing with remote-control cars in the parking lots while he worked inside. Or maybe Opus 2 is the sort of place you worked your first job out of college, talking to vendors on a hulking Western Electric model 500 telephone in an orange upholstered cubicle while heavyset men in short-sleeve dress shirts and sideburns smoked cigarettes and banged on desk calculators. 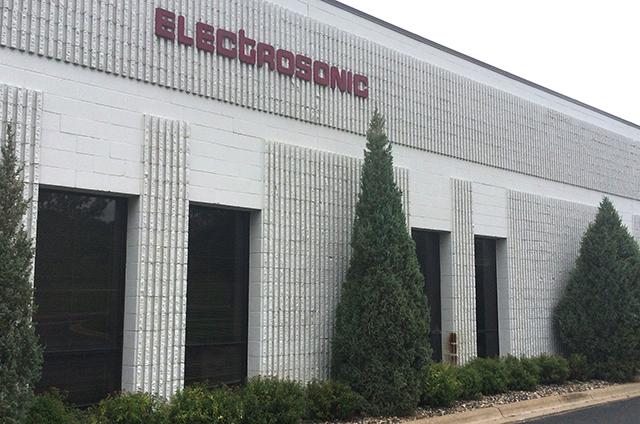 Enough time goes by, though, and even these once-mundane environments will start to chafe against contemporary tastefulness in an odd and pleasing way. A walk around Opus 2, away from the coffee shops and fitness centers that anchor the front entrance in the 21st century, imparts that feeling. There’s a sweet spot in finding a site that’s overlooked or ignored enough to have evaded remodeling, but is just old enough to register as somewhat alien to contemporary sensibilities. A lot of those types of places are located, at the moment, in first-ring suburbs, and Opus 2 is about as good an example as you can find in the west metro.

The buildings in Opus 2 are low and heavy, light on windows and cataloging nearly every variation on brick, cinderblock and molded concrete available to builders at the time. The campus is ringed with paved pedestrian trails that weave under and around the one-way streets and sweeping parking lots that are, on the weekend, completely empty. The occupancy rate of the buildings is fairly high, dominated by engineering and technology businesses with the sorts of names you might expect to find listed in the back pages of an issue of Popular Mechanics circa “Blade Runner”: Anodyne Inc., Precision Punch and Plastic, Electrosonic, Teach Me Tapes. You get the sense you could walk into any office door in the place, and find a fully functioning Cray-2 supercomputer inside. These are all thriving companies, as their websites will attest, but the degree to which they’ve evaded on-trend rebranding is nearly heroic. 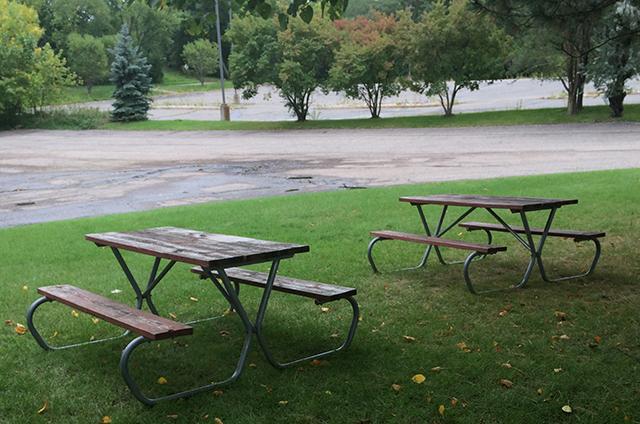 A lot of the buildings on the periphery date from the 1990s, and house well-known (and unloved) corporations like Comcast and UnitedHealth. There are at least two fairly recent high-rise hotels, which serve as a testament to the fact that business travelers are making their way to meetings in these buildings regularly. Past the slicker, more public-facing outer ring of the development, however, there is a concrete core that has resisted much in the ways of prettification.

What I admire about these buildings is their functionality: They are concrete blocks with the lightest touch of ornamentation, meant to house high-tech machinery and processes without making a big deal of it. The architecture is not overly worried about making a good impression on you. To that point, the defining characteristic of many of these buildings is not the front customer entrances, most of which are – in the words of one of these businesses – anodyne. The primary points of entry and exit are enormous loading docks tricked out with insulation hoods, green and red lights, pneumatic pumps and, in the case of at least one, some pretty mod fiberglass accessories. These buildings’ connection to the world is mediated primarily by fiber, copper wire, supply chains and trucks, not through people walking in the front door. 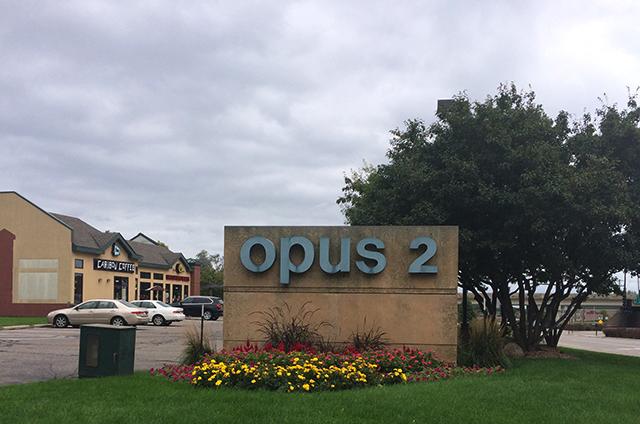 There is a place for you, lowly human, in the mechanized future of Opus 2, however. A ’70s mixed-use community wouldn’t be anything without its pedestrian amenities. The way the paved trails connect to the rest of the Opus 2 campus and the four-color wayfinding system seems planned with the same technocratic efficiency that loops the one-way streets around the campus in an unending circulatory system. The trails are marked every so often by one those great visual hallmarks of the suburban office park: aging wooden picnic benches, where employees can take their lunch breaks. Occasionally, flocks of wild turkeys will meander across the trails and parking lots, giving the scene an either chillingly post-human or pleasingly sylvan flavor, depending on your perspective.

There is a lot to see in this setting, for someone looking for nuance. Most notably, Opus 2 is a treasure trove of typefaces for admirers of midcentury modern. The aforementioned Electrosonic is the champion in this arena – its logo looks like the sort of thing you’d see on a display screen in a Douglas Trumbull movie. “The Electrosonic brand is a valuable asset of the company,” beams the company’s website, and even includes a style guide for how the logo can be used. “The Electrosonic logo should only be displayed in the Electrosonic red, black or white.” The runner-up is Wunderlich-Malec Engineering, which retains the original, early ’80s Microgramma logo on the building’s external signage. (Parenthetically, Wunderlich-Malec’s physical headquarters, hidden behind a scrum of trees, are surprisingly chic – a brick palace with a tower that emulates the sort of historic brick silos that once dotted the landscape). 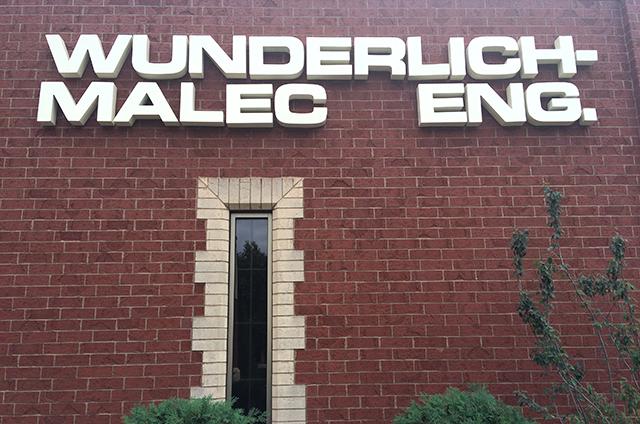 As great as these are, my favorite sight was over the employee entrance of the former headquarters of SCICOM Data Services. SCICOM was a data processing company recently absorbed by Venture Solutions, located in Arden Hills. In terms of branding, it’s probably just as well – SCICOM is, like the name Opus 2 itself, chilly and not particularly user-friendly, more like the name of a company that manufactures urban pacification enforcement droids than database management software. The slick and facile name Venture Solutions is probably a much easier sell.

The SCICOM building is now vacant and awaiting new tenants, but the phrase EXCELLENCE ENDURES remains emblazoned in all caps over the entrance. Perhaps this was a reminder to employees coming back in from their lunch breaks at the picnic tables, or a promise to would-be customers walking in. Walking through Opus 2, you realize that while excellence may endure, excellence is also somewhat of a moving target. Architectural styles, commercial cultures, ways of interacting with the larger world, how people, commerce and industry coexist – these ideas change and adapt over time. Opus 2 is an interesting reminder of what those ideas looked like at a certain point in time, and how aspects of those ideas endure.

Thanks to Joel, whose occasional use of Opus 2’s loading docks brought me there.