Occasionally, in this line of work, I will receive an email that makes me grateful to have a platform for highlighting otherwise hard-to-classify fragments of the Twin Cities’ landscape, and doubly grateful that other knowledgeable people out there are excited to share their own. One such email came from a reader named Andrew several months ago, informing me he’d created a map of every one-block street in Minneapolis, and thought I might find this of interest.

Of course! Who wouldn’t? I presume you might find this of interest, too, or you wouldn’t have clicked through in the first place, and would instead be enjoying one of one MinnPost’s other fine pieces of reportage right now.

This was one of those emails that made me feel very grateful to be alive at this time in history, when it’s so easy to collect information like this that might otherwise be overlooked. Andrew created an ArcGIS map to detect street centerlines shorter than 600 feet, and the finished product is a collection of all the independent one-block streets in the city, confirmed with an afternoon of fieldwork on bicycle. One-block streets typically aren’t considered very closely – in fact, before looking at Andrew’s map, I wouldn’t have been able to name more than a handful.

A one-block street is easy to define – a street that runs one block and one block only – but there are a few different types that don’t necessarily relate to one another.

In a lot of cases, they’re more like vestigial organs. Take poor old Maple and Ontario Streets, for example, near Loring Park and Interstate 94. Now each one lonely block, they were butchered down from much longer streets, formerly clustered together with similarly named Great Lakes and American tree-themed streets, now stumpy nomenclatural outliers.

Nicollet Island has a few good one-block streets, too, but their length probably has more to do with the inherent limitations of the island’s size. Power, Grove and Wilder Streets might stretch on as long as Nicollet Avenue or Lake Street if they had room to do it.

That leaves a handful of legitimate oddities, short streets intentionally created to be one block in length only, with non-numeric names that don’t sound like the sorts of street names you’d find on a map of Minneapolis: Glabe, Printice, Ortman.

Two of the most interesting one-block streets – or as interesting as a street can manage to be in 600 feet – are closely tied to the fortunes of Augsburg College, on the West Bank of Minneapolis. Both of them are intentionally laid atop the grid, as tributes to the history of the neighborhood, and separated from each other by I-94, the establishment of which is also tied to the fortunes of both streets. 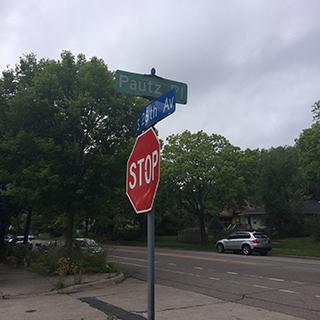 MinnPost photo by Andy Sturdevant
Dick Pautz, a man to know in Seward.

Pautz Place, also referred to as Pautz Street on some maps, runs for one block, just south of Franklin Avenue between 26th Street and 27th Avenue. It’s really more of an alley, located behind the Seward Co-Op Creamery building. There are no street addresses on Pautz or businesses facing it, but it is marked by a street sign, and you could drive down the length of it if you were heading north and couldn’t wait half a block to turn on Franklin. The name made me think of the early settlement of the neighborhood, of German immigrant brewers and signage painted in Gothic script. Bohemian Flats, not far away, was once crammed with ramshackle little roads with blunt, European names that were later erased by the construction of I-94 and the expansion of the University of Minnesota onto the West Bank: Sverdrup Street, Bjornson Avenue. Pautz, perhaps, was a forgotten German merchant whose shop was located on the block, and whose namesake street escaped the fate of its neighbors.

This might sound right, but it’s not so: A quick look at the early plat maps doesn’t show any sort of a named street in the area before 1920. Pautz, in fact, came along a bit later – both the street and the person it was named for.

For years, Dick Pautz ran a real estate office at Franklin Avenue and 27th Avenue, where the street that bears his name is now located. He lived in Seward before it was known as Seward, attending Augsburg College and graduating in 1939 with a number of academic and athletics honors. In the following decades, Pautz was sort of the main man to know around the neighborhood. At various times, he served on the local civic and commerce association, the Augsburg Board of Regents, as the head of both the college’s public relations and athletics departments, the Seward neighborhood group, and various roles involved in the construction of Fairview Hospital.

When Augsburg looked like it might decamp for a suburban campus during the white-flight years, Pautz was instrumental in persuading its leaders that it should remain in the neighborhood. When I-94 was muscled through in the 1960s, Pautz was involved in the negotiations to mitigate its effects. It seems like there wasn’t much that happened in the neighborhood in the mid-20th century that Pautz wasn’t somehow involved in, between his arrival in Seward in 1933 and death in 2009. Pautz-Franklin Realty’s offices were located near the east end of the street.

Besides the street sign, there’s no plaque or interpretive material on the site. A few other prominent citizens have one-block streets named for them near sites associated with them – City Council Member Alice Rainville near the Minneapolis Convention Center, pro sports booster Norm McGrew near U.S. Bank Stadium – but Pautz is one of even fewer with just his surname attached to a street. 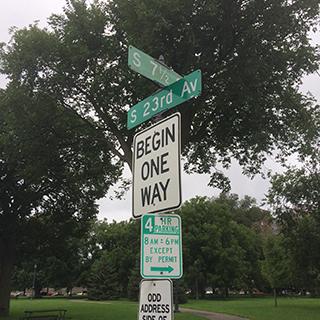 MinnPost photo by Andy Sturdevant
Our Central Park? No, but a nice little park all the same.

Just on the other side of the I-94 sound wall, on the campus of Pautz’s alma mater, is South 7½th Street, running the one block between 22nd and 23rd Avenues, just north of Murphy Square Park. Seven-and-a-Half Street exists for the sole purpose of serving as the park’s northern border, since the park is quite a bit older than anything else in the neighborhood.

In the late 1850s, the story of the creation of Central Park in New York City had spread across the North American continent, an important development in the relationship between cities and public spaces. “Of great importance as the first real Park made in this country,” said landscape architect Frederick Law Olmsted at the time, “a democratic development of the highest significance.” The idea of parks may have been on the mind of an influential citizen named Edward Murphy in Minneapolis, living just on the outskirts of downtown in an undeveloped tract of the city. In 1857, the year Central Park was established, Murphy turned over a former cow pasture on the land he was developing as use as a park. The city would not formally take ownership of the park until the 1880s, but by then, the park had already been in use in the neighborhood for three decades. It didn’t become Minneapolis’ Central Park, as Murphy may have intended, but it is the oldest continually used park space in the city.

The city grew up around the park, as did Augsburg College. When the city’s street names were formalized and numerated in 1873, Van Buren and Taylor Streets were renamed Seventh and Eight Streets, and when the boundaries of the park shifted a bit later, 7½ was inserted for one block to hold down the north end. Why a fractional number and not an honorary name (“Murphy,” for example) was used isn’t clear. Oddly, the street running south of the park was designated Butler Place, a name it still holds — though today it’s primarily a frontage road running along the I-94 sound wall. 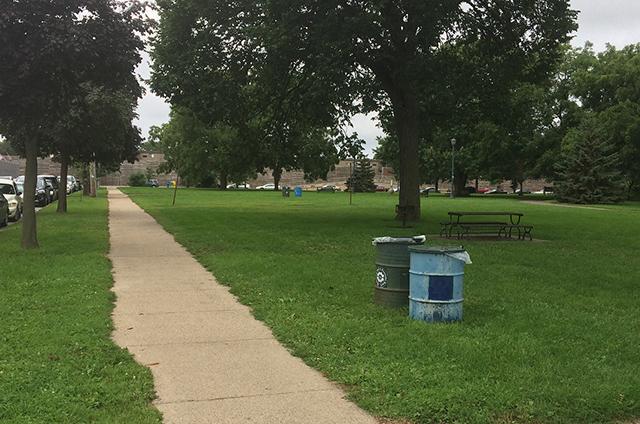 MinnPost photo by Andy Sturdevant
The north side of Murphy Square Park.

The park today has been so absorbed into the body of Augsburg, it barely registers as a city street, and more as a quick way for students to walk from Old Main to the Ice Arena. Murphy Square Park feels more like an on-campus amenity itself, and was for some time maintained by Augsburg. Seven-and-a-Half Street, like Pautz Place, doesn’t have any street addresses on it, but is marked with a sign.

Both streets are, in their own ways, an odd little testament to the way cities are built: Even the smallest tracts of land are carved out, wrestled, massaged, named or renamed for a variety of purposes. I think of these types of one-block streets as edits to a manuscript, a quick addendum made after the fact to be incorporated into later editions. A little like the ^ symbol in copyediting, indicating a word insertion. Sometime all you have to work with is one block, and if that’s the case, you insert the idea where you can. Pautz and 7½ are both small edits to the larger manuscript.

The one-block streets of Minneapolis: Little edits to our geographical manuscript