In Kevin Lippert’s recent book “War Plan Red,” he details a plan by the Canadian military in the interwar years to hold off a hypothetical attack by the United States on Canada with a pre-emptive invasion. This would have been mounted in the years after World War I, when geopolitical alliances were more fluid, and before they fixed themselves into the now-familiar Axis and Allied powers of the Second World War. In the chance the United States and Great Britain found each other at odds with each other, perhaps entangled in alliances with Imperial Japan or European powers, a conflict with Canada isn’t impossible to imagine. Unlikely, but not impossible.

In the event of this particular scenario, a plan called Defense Scheme No. 1 was drafted by Lt. Col. James “Buster” Brown in 1921. If and when evidence of an impending American invasion were to come to light, the plan specified, the Canadian military was to conduct a three-pronged invasion of the northern United States, creating enough of a havoc to put the U.S. on the defensive, and buy some time for Great Britain to jump into action and save its ally. The end result of Brown’s middle pronged attack was the deployment of Prairie Command troops to swoop down from Winnipeg to invade Great Falls and Fargo, and then ultimately to occupy Minneapolis and St. Paul.

Brown even undertook some very informal (though probably grossly illegal) reconnaissance missions in and around Vermont, near the border – scoping out bridges, locks and railroad lines, and chatting with locals in taverns. Lippert’s telling of these missions and their reports are the most amusing parts of a dark alternate historical scenario. Brown apparently found Vermonters to be “fat and lazy but pleasant and congenial,” and suspected there were “large and influential numbers of American citizens … [who are] not altogether pleased with democracy and have a sneaking regard for Great Britain, British Law, and Constitution, and general civilization.” He suspected alcohol-deprived Americans might welcome their new Canadian overlords, and the barrels of illegal Canadian whiskey they’d bring with them. 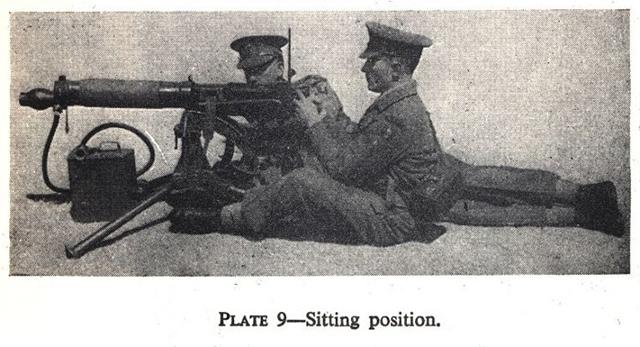 The invasion was never meant to be a successful, long-term occupation, but a semi-suicidal maneuver to buy some time for Canada before Britain could intervene. It was doomed to fail in the long term.

It was not seriously considered, either. Brown’s plans were burned shortly thereafter, and only fragments remain. In fact, he might not have been as off-base as we’d think: There was a roughly concurrent U.S. plan for an invasion of Canada under similar circumstances called War Plan Red. 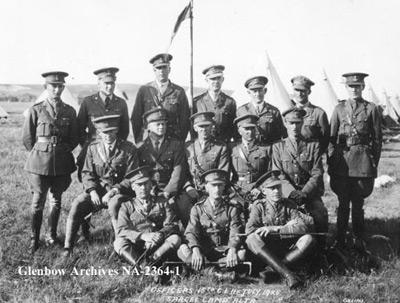 As it is the divinely ordained duty of every Minnesota writer on the internet to find a local angle for any phenomenon, no matter how dubious or stupid, I would now like to take this opportunity to contemplate the Canadian occupation and destruction of the Twin Cities.

The whole plan was so far-fetched almost anything you can imagine about the specifics would be in the realm of fiction. This is perhaps a nice way of saying I am not a military historian, nor do I pretend to have any special insight into how the troops of the Canadian Prairie Command would have handled a land invasion in 1920. I did speak to a retired Canadian major and military historian on the topic, a helpful man who had the good taste to prefer not to be named. He confirmed the farcical nature of the whole scenario. “The planning of defence schemes were make-work projects which the Central HQ staff dreamed up to keep themselves busy,” he pointed out. “As expressions of intent, they border on folly.”

Folly though they may have been, there are certain aspects you can highlight for how an invasion would have looked on the ground. The Canadian flying columns would have been deployed in trucks, packed with guns, explosives and soldiers. Historically, flying columns have utilized horses, though in this interstitial period between equestrian warfare and modern mechanized tank warfare, trucks seem most likely.

What sort of troops are we talking about? Most likely, a volunteer militia. “Even assuming that Canadian citizen-soldiers could be persuaded to volunteer for such a mission,” the major said, “at best the flying columns would have made Pancho Villa and his thugs look like icy professionals.”

What we are dealing with, then, is independently directed units of unarmored Ford trucks packed with rowdy prairie province roughnecks packing TNT, Lee-Enfield rifles and Lewis machine guns. Imagine the 1984 Edmonton Oilers, led by Dave “Cement Head” Semenko, but with guns. These are not huge numbers of massed troops out of an Abel Gance silent epic you might have seen at the time, but more like small units of guerrillas out of the also-concurrent silent film “The Life of General Villa.”

The focus of their destruction would probably have been rail lines. The goal of the invasion was not necessarily to occupy population centers, but to disrupt communication and spread havoc, waylaying any impending U.S. invasion. The network of trunk highways and rural routes was pretty primitive at that time, and the vast majority of communication was organized around rail lines. Transit historian James W. Diers helped me identify some potential targets and routes the Canadians might have taken. Between Fargo and the Twin Cities, the major rail routes would have been the Soo Line and the Great Northern. These most likely would have been the routes the invading militias would have followed into Minneapolis. 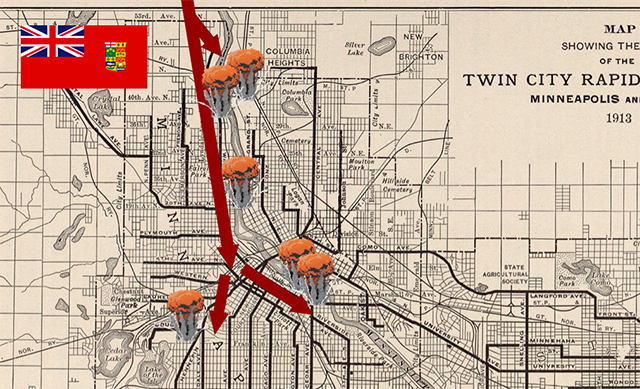 The focus would have been, perhaps, river crossings in railroad towns like Fergus Falls and St. Cloud, coming into Minneapolis from the northwest, roughly along the current route of the Northstar commuter rail. Marauding through Anoka, they might have encountered – and, for the sake of the future of the Twin Cities, spared – an 8-year-old boy named John Phillip Keillor, who would have a son named Gary a few decades later.

It all sounds nuts, and it is. But, as George Peakes, one of Brown’s colleagues in the Canadian military, later pointed out, the border in the Midwest was lightly defended, and a quick attack, launched in concert with coordinated attacks in the Pacific Northwest and the Northeast, might have been enough to “hold them out of central Canada, until Britain intervened, or second thoughts prevailed in Washington.” The relative lightness of border defense might have made the guerrillas’ task easier.

Had the flying columns reached Minneapolis quickly enough to maintain an element of some surprise – and who knows if they’d have found a town largely emptied out by fleeing civilians, or one full of armed National Guardsmen and citizens dug into every block – there would be some obvious targets. A successful attack on the old Riverside Generating Plant at Marshall Avenue and 31st Avenue Northeast, accessible from the Soo and Great Northern rail lines at the 42nd Avenue bridge, could have brought down the power grid. Closer into downtown, destroying the two rail bridges between the Lowry Avenue and Hennepin Avenue bridges would disrupt rail traffic to Chicago and the east. The Stone Arch Bridge would also be an attractive target, being a lynchpin for rail traffic out of Minneapolis, though I imagine it might have proved sturdier than the truss bridges to the north. Destroying the nearby Rapid City Transit steam plant might also have been an option, disrupting civilian streetcar operations in Minneapolis. Really, the entire west bank of the river (and most of the east bank) was railroad yards, any of which would be an attractive target for disrupting communications, shipment and travel. 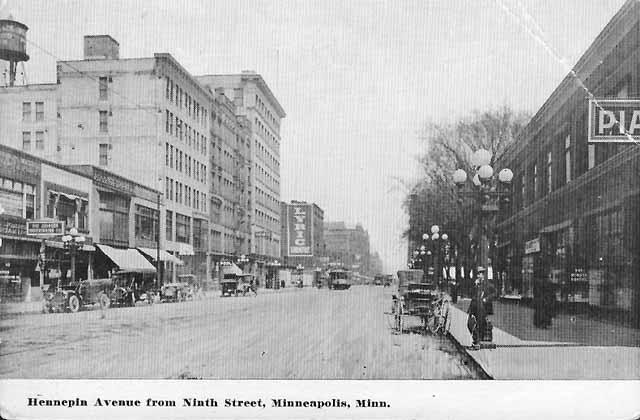 Assuming the Canadians would have focused primarily on military targets, some units could have sped down Lyndale Avenue or the Great Northern rail line to the old Kenwood Armory, located near what is now the Walker Art Center. A logical target for either capture or destruction, the invaders would have met probably their fiercest resistance from the National Guard troops headquartered there. The old Armory was a formidable-looking building, but it was actually condemned only a few years later after the foundation began sinking, and it was deemed to be in danger of imminent collapse. Perhaps a well-placed dynamite blast might have done it in completely.

Between those few targets, a well-armed gang of marauding guerrillas with some speed, brute force and luck could have hypothetically shut down a major U.S. city. As for what would have come next, who knows? American troops rushed up into the city from the south and east, urban warfare in the downtown core, hand-to-hand combat along Hennepin Avenue in the Gateway District and the mansion district behind the Armory between errant Canadian guerrillas and soldiers of the U.S. Army Reserve, columns of the 18th Infantry Regiment out of Fort Riley, Kansas marching down Nicollet a week later and greeted as liberators, martial law, persecution and detainment of Canadian-Americans (like, for example, Garrison Keillor’s father). I’m not ready to get into full Harry Turtledove territory, but you can play out any number of scenarios.

Here, a thought experiment like this goes from sort-of-fun to sort-of-grim when you actually consider the horror of combat, and what it might mean to pass the mill ruins on the Mississippi River and consider how you might think about them if they’d been created by bombs and gunshots, and not through simple neglect.

In scenarios like this, I think of a lyric by those subjects of the British crown The Clash: “I like to be in the U.S.A. / Pretending that the wars are all done.” The legacy of Defense Scheme No. 1 and War Plan Red reminds you, though, that what now passes for historical oddity was once considered within the realm of possibility. There were Canadians and Americans who, at one time, were at least a little bit ready to go to war with each other if the situation demanded it. The unthinkable only requires a little push in the wrong direction to become reality.