Rachel and Ben Awes are indefatigably creative people who, with a sense of play and wonderment, inhale inspiration and exude ingenuity the way the rest of us breathe air. He’s an architect with the much-lauded and innovative design firm, CityDeskStudio. She’s a psychologist with a thriving practice. But that’s not all.

Ben also designs and builds rockets (yep, the kind you shoot off in your backyard), raises African desert tortoises (in the basement), and builds striking functional furniture. Rachel is also an artist whose vibrant palette of line and color dovetail with her whimsical prose (check out her blog, “all i did was listen,” which is also the title of her forthcoming book).

In 1999, the couple and their two sons (now teenagers) began outgrowing their one-level bungalow. They went house hunting, but couldn’t find one they could afford — or that would accommodate their growing family and diverse pursuits.

“Here I was, a young architect just out of school, and I thought, let’s build our own house, just what we want, that fits our lifestyle,” Ben says. So they did. And they’ve been growing into their house — just as the house and neighborhood have been adapting to them — ever since.

The Neighbors: From Resistance to Acceptance

Ben shoehorned the shoebox-like 2,050-square-foot house onto a 39’9″ x 150′ lot in St. Paul’s Merriam Park. First: The lot. Owned by a friend of the Aweses who also owned the rental property next door, the lot had been vacant for a long time and was used by a neighbor as a vegetable patch. Nonetheless, the neighborhood felt quite proprietary about the narrow open space between two houses. 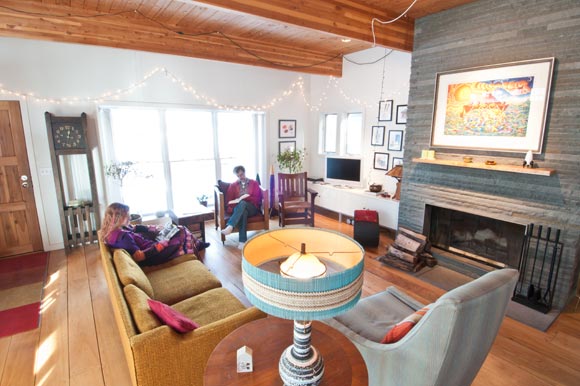 Photo by Bill Kelley‘Our house is a reflection of who we are,’ says Rachel Awes

The residents pooled their money to buy the lot and put it in a trust, Ben recalls. “They considered us the faceless enemy.” But the friend sold the property to the Aweses. Over time, the neighbors came to accept the new family and their house, which Ben describes as “contextually modern; that’s of today but still sensitive to its context”–even organizing a painting party when the time came to paint the home’s exterior.

By “contextually modern,” Ben explains, he means the scale, proportions, and materials of the house (which has no bump-outs, dormers, mudroom) fit into the 1920s neighborhood of classic four-square homes. Its simple narrow shape, expanded to the west by a porch that runs the full length of the house (much of it glass wall), is anchored by a broad set of front steps that communicate openness and welcome.

Sustainability wasn’t a goal. Still, the house was constructed to high-efficiency standards. It’s thoroughly insulated, with vapor barriers in the exterior walls, sealed outlets, Hardie board (fiber cement) siding, and a metal “lifetime” roof. Ben says, “We did as much as we could at the time, but our goal wasn’t to build a zero-footprint house.”

Instead, the Awes were resourceful. The kitchen countertops are concrete, and the cabinets were designed and built by a student from Minneapolis Community and Technical College. Ben repurposed metal pipes for a basement-stair wall. He used a silver maple that fell on his parents’ property for the living room’s wide-board floor, and a slab of unfinished wood (also from a parental project) as an extension to the kitchen island. Raw-metal panels used as pantry doors — still bearing the wax-pencil reminder “bill Ben Awes” — came from one of the contractors.

Fashioning Their Own Furnishings

The house’s décor, much of created by Ben and Rachel, is eclectic, to say the least. “But it all works because we love each thing,” Rachel says. The open living-dining space, with its high-beamed unfinished ceiling and refined fireplace of stacked bluestone, is furnished with mid-century finds, an IKEA storage locker (which doubles as a TV stand), Mission chairs, and a chair Ben fabricated from plastic sewer pipe and a cushion. 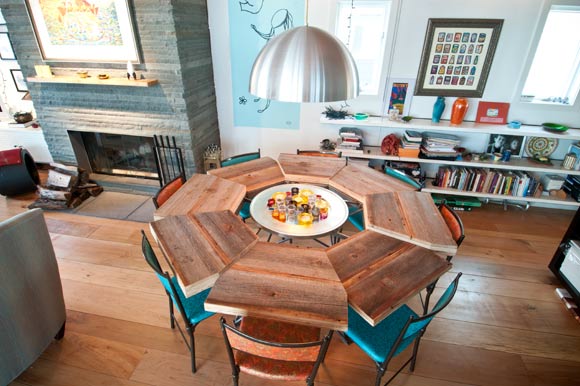 Photo by Bill KelleyBen made the round dining-room table, with its “placemats” of raw wood stacked in varying heights.

Ben also made the round dining-room table, with its “placemats” of raw wood stacked in varying heights. A long, low table functions as rocket-making central, and is strewn with models and parts. Rachel’s drawings adorn the walls, and one of her desks is tucked into a corner of the dining area beneath the stairs. In the kitchen, near her writing/drawing desk, are two large glass jars filled with colored paper: For the one-year anniversary of her blog, Ben printed out every reader comment, rolled them up and put them in a jar.

The Case for Evolution

“The space continues to work wonderfully for us, and the house continues to evolve to accommodate us,” Rachel says. One day, Ben came home to find Rachel painting an inspirational phrase on their bedroom wall. (“You’ve just got to go where you’re moved,” Rachel says.) One day, she came home to find he’d sawed the wall out of one of the boys’ bedrooms: “We originally designed that space as a bedroom-office hybrid,” Ben explains in his defense, “and our son hasn’t complained about the opening yet.”

Ben turned a corner of the basement into a dance studio for his other son, who’s an avid hip-hop dancer. But despite a recent recital by a friend, the studio — complete with a wall of mirrors, a sprung-wood floor (underlaid with layers of wood lattice fencing from Menards), a bench for the audience and a metal curtain track — is the boys’ video-game hangout. “We can’t quite keep up with ourselves and what we need,” Rachel explains with a hearty laugh.

As home, workshop, and playhouse, the Aweses’ shoebox is a palette for their ongoing creativity. “I often think about how I affect the house, how the house affects me,” says Rachel, “and how the back and forth is such a huge component in living in the fullness of who you are — for us and for our children.”

Ben: “If your house can’t be that, then what can?”

Rachel: “Our house is a reflection of who we are.”

Ben: “And the house is catching up with us.”

This article is reprinted in partnership with The Line, an online chronicle of Twin Cities creativity in entrepreneurship, culture, retail, placemaking, the arts, and other elements of the new creative economy. Camille LeFevre’s last article for The Line was a profile of St. Paul’s Big Table Studio.