“The average person who is on Facebook has 229 friends, but only five of those Facebook friends are neighbors,” says Steve Clift, Executive Director of E-Democracy and the driving force behind BeNeighbors.org. “If you want to talk about neighborhood crime statistics, start a community garden, or compare notes about the new restaurant on the corner, your high school buddy or old college roommate aren’t the ones to ask — your neighbors are.”

Clift’s organization has been providing virtual spaces for neighbors to connect since 1994, and his efforts just got a big boost with a $625,000 Inclusive Community Engagement Online grant from the John S. and James L. Knight Foundation. Over the next three years, BeNeighbors.org is hoping to enroll 10,000 people in St. Paul, with a goal of 10 percent of households citywide eventually participating. The grant, which was announced last month, will be what Clift hopes is an important step in creating more informed, active, and connected neighbors and neighborhoods.

“Everyone needs a place of civility and engagement, where you can get to know your neighbors and maybe improve your community. It’s like the chat over the fence with a cup of coffee, only in a virtual format,” he says. The community forum concept that was created by Clift’s organization has already achieved success in a number of neighborhoods, including Cedar-Riverside, Phillips, and Frogtown.

The first order of business in making this new effort successful is to let neighbors know about the forums, and to encourage participation. Clift plans to do that at ice cream socials, festivals, and neighborhood gatherings, including Rondo Days, Grand Old Day, and other St. Paul get-togethers. “Our secret technology is the paper sign-up sheet,” he says. “When we reach a quorum of 100 signatures for a neighborhood, we send out a message that the forum is active, and the members just hit ‘reply’ to get started. All you need is an email address. It’s a site that can easily be accessed at the local public library, even if there is no connected computer at home.”

One distinctive aspect of the forums is the presence of a volunteer forum manager, the person whose role is that of “virtual mayor,” Clift says, and whose job is to maintain civility and keep the topics fresh and interesting. “The forums exist to share information, not diatribe or attacks,” Clift says. “We want to be a respectful and safe place, not a lawless ghost town, and the forum manager helps make that happen.”

Another key element in creating these spaces is old-fashioned personal outreach, such as that conducted by Julia Opoti, a native of Kenya, freelance writer and host of the weekly radio show “Reflections of New Minnesotans” on AM 950. As the Cedar-Riverside Outreach Leader, she has built her forum’s membership by striking up conversations at coffee shops, restaurants, and neighborhood meetings. 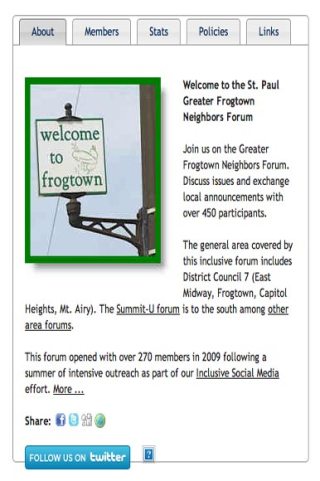 “There are so many negative comments in the media any time there is a story about the immigrant community, so we do not feel comfortable in the mainstream media. While Somalis have a vibrant space on Facebook, there really wasn’t a safe place that included everyone in the area. Our forum is a wonderful space where you can post about something as small as a play happening in the neighborhood. And since Cedar-Riverside is a very oral community, if one person reads it, a whole bunch of other people will know what’s happening.”

Frogtown’s Community Outreach Leader, Boa Lee, also stresses the importance of old-fashioned in-person contacts to build online forum membership. “One-to-one conversations are key in showing neighbors the benefits of being engaged digitally. Members include busy mom-and-pop shop owners, college students who might be away but still have family in the neighborhood and young professionals who shop in or live in the neighborhood. While they might not be able to attend an in-person meeting, they still want to be in the loop. There are also some older immigrant business owners who are not tech-savvy, but who ask their children to monitor the forum, participate in discussions, and post about their shops.”

The activity encouraged by these forums made the grant a “mission match,” in the eyes of Polly Talen, Knight Foundation St. Paul Program Director. “We’ve recently pivoted our focus toward informed and engaged communities, fostering engagement through meeting community information needs. This grant was a wonderful coming together of a number of things that Knight is doing nationally and also locally, in support of the Central Corridor,” she says. “We’ve known Steve a long time, and have tremendous respect for him and for the way he’s carrying our story forward.”

From talk to action

For now, the focus is on getting the word out that BeNeighbors.org exists, and that it’s a safe and friendly place to get to know the people who live nearby. Clift believes that a civil or helpful exchange on the forum can foster in-person cooperation. “At the neighborhood level, people move from talk to action more frequently. When you build trust by finding a lost dog, or loaning someone a tool they’ve asked for on the forum, you’re more likely to take the next step and go to that meeting at the library to discuss a crime wave, combating noise pollution, or the logistics of creating a community garden. Proximity helps people cross barriers and neighborliness helps build trust,” he says.

So, what will the result of all this clicking and pointing eventually be, when 2015 rolls around, and the three-year campaign is winding down? Opati, the Cedar-Riverside Community Outreach Leader, hopes that an online forum will make progress toward thawing out the social behavior of famously reserved Minnesotans. “It will be really interesting to see cross-cultural conversations that don’t usually happen in Minnesota at all, if we’re successful at getting together enclaves of people who don’t usually connect,” she says.

Clift has a bold prediction: “St. Paul will become the most inclusively connected community for neighbor-led two-way exchange online anywhere,” he says. “The city has the opportunity to become a national leader in the next generation of digital inclusion efforts.”

A ‘Facebook for the neighborhood’ expands in St. Paul

By Julie Kendrick, The Line