If you decided to devote 24 straight hours of your day-job skills for a cause you really believed in, what would it take to keep you going? Unlimited amounts of Izzy’s Ice Cream and Pizza Lucé? A barrel of iced Red Bulls? Access to endless games of air hockey or Bag-a-Buck arcade games? How about a hot shave for that five o’clock (five a.m., that is) shadow?

If that all sounds mighty fine, you would have been in nerdy nirvana at the recent Overnight Website Challenge, an annual event organized by The Nerdery, a custom interactive development company based in Bloomington. Held on the St. Paul campus of the University of Minnesota, this was the fifth annual event in the Twin Cities.

“We’re doing this to help good nonprofits with not-so-good websites,” said Mark Malmberg, communication manager and co-president at The Nerdery. “It’s a way to connect the wires between technology and mission,” he added, noting that the normal fee for the level of services delivered would probably be around $25,000 to $30,000 for each newly developed site, and would take four to six weeks to complete. He estimates that since 2008, volunteers from the interactive community have donated more than $2.5 million worth of professional services to 84 nonprofits. “The Nerdery,” said Malmberg, “continues to consider this just a good start.”

In order to win this high-tech jackpot, nonprofits and nerds had to jump through a few hoops. Malmberg reports that 34 nerd teams and more than 80 nonprofits applied for what he called “essentially a 24-hour blind date.” After a panel of judges (composed of independent web professionals and nonprofit representatives) selected the finalists, a “speed dating” event was held a few days before the event, allowing representatives from the 18 selected nonprofits and the eight-to-ten-member nerd teams to find their perfect match.

“That speed dating was like overstimulation on adrenaline,” said Gail Kulp of The Windmill Project, which connects families who have children with disabilities. “I wanted them to feel my passion. I certainly don’t do this for the money, but because I know how important it is. I feel we’ve already won a magnificent prize, just by being able to participate.”

Susan Kane, of the Valley Friendship Club, described herself as “giddy” when she learned her all-volunteer organization had been selected. “We had already gotten bids to redesign our site, and they were out of the ballpark. Receiving a new site at no cost lets us puts funds toward our programming for children with disabilities.”

None of the teams knew who their match would be until after they arrived on Saturday morning, hauling along carfuls of computers, monitors, sleeping bags, and pillows. After finding their dog-tag-style name badges — decorated with an eyeglass symbol (for nerds) or a heart (for nonprofits) — the group watched a videotaped welcome message from Senator Al Franken (who visited in person last year), then dived into developing brand messaging, process streamlining, and the eradication of clunky programs — like the ancient and much-hated Joomla — in favor of easy-to-maintain platforms that were also easy on users’ eyes.

Many of the nonprofit teams brought along care packages for their nerds. The Valley Friendship Club had written knock-knock jokes related to lack of sleep, tying each one to a piece of chocolate. Others asked board members to drop by for thank-you visits. One of the more outrageous thank-you’s was delivered by Eve Bassinger, who hauled out her full-body hot dog costume and convinced fellow Youth Performance Company board member Cheri Galbraith to don a “Miss Chievous” getup of leopard-print dress, blonde wig, sash and crown. They delivered mini-containers of Häagen-Dazs ice cream and thanked their nerds for the all-night effort. 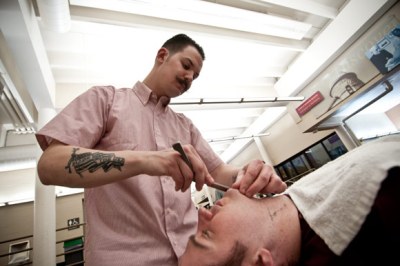 During the course of the slumberless party, a countdown clock, visible on screens everywhere, ticked away the seconds until the finish. In between intense work sessions, participants took breaks at arcade games, had caricatures drawn by Minneapolis College of Art and Design (MCAD) artists, indulged in hot shaves from Mustache Mike or received chair massages from Unwind Within. And, while sleep was in short supply, sustenance was not. Sponsoring restaurants included CRAVE,Sopranos Kitchen, Pizza Luce, Gyropolis, Bacio, Zelo, Jimmy John’s, Espresso Royale, St. Agnes Baking Company, and Izzy’s Ice Cream, while Peace Coffee kept busy all night at a booth promising “Liquid Nerd Fuel.”

Things got more challenging as the night wore on. “I hit my wall about four a.m.,’ said Mark Hulburt, vice president of marketing at The Nerdery. “But I took a half-hour nap in the ‘Quiet Room,’ had two coffees, and then I was good to go.”

By Sunday morning, work was wrapping up, and the teams began their treks to the judging room for eight-minute presentations– one minute for every three hours of work. Waiting their turn at 8:30 a.m. was Full Court Word Press, who’d been matched with Youth Performance Company (YPC), a Minneapolis-based youth theater company. While everyone in the group looked a bit bleary, the YPC representatives had a Christmas-morning giddiness attributable to the mighty challenges their nerd team had conquered.

Captain Tim Elliott, president at Acan Media, reflected for a few moments on what had just happened. “Our key word this time was ‘easy,’” he said, “and I think we really pulled it off. This organization serves young people, so a big thing they needed was the ability to keep their content super-fresh. We were even able to include a Facebook log-in for their young artists, which they really liked.”

The team was summoned for judging, emerging exactly eight minutes later, looking decidedly less energetic than when they had gone in. “Now that it’s over, I think I may lie down right here and fall asleep,” joked YPC’s managing director, Sherilyn Howes. “I can feel the adrenaline draining out of me.” Inside the judging room, Christian Erickson, principal, Zeus Jones, Ltd., commented on the 18 presentations he and his fellow judges had heard that morning. “It’s stunning to see all that they get done in 24 hours,” he said.

Finally, at nine a.m., the assembled crowd shouted down to zero in unison with the timeclock, and a “Put Down Your Keyboard” message appeared on the screen. After the awarding of raffle prizes–including a chess set and a Star Wars Lego kit–finalists were announced and given the opportunity to showcase their work to the group. Top honors went to Little Voyageurs Montessori School, Metro CISM Team, West African Medical Missions and Franconia Sculpture Park. The nerd development teams won nothing but bragging rights, but they seemed elated at the recognition. 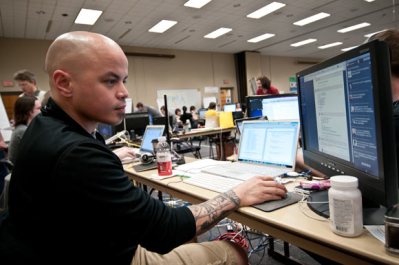 “It’s really late and really early, all at the same time,” joked Lisa Mason, associate director of software development at The Nerdery and team member, Royal Canadian Kilted Yaksmen, as she took the podium for a presentation about her group’s work for Little Voyageurs.

Nearby, Gabriel Schlough, founder and director of West African Medical Missions, stood with his winning nerd team of Two Unicorns, One Moon, captained by Jason Reed, senior interactive designer, TST Media. In the days leading up to the event, Schlough had said, “Everyone who knows us says, ‘You’re great, but, ewww, that website.’ If this really works, it will be a huge elephant off my back.”

Now, standing beside his successful web development team on Sunday morning, Schlough was beaming, telling the audience, “I started this nonprofit when I was still a college student, because I cared so much about marginalized people, and this event is the first time I’ve ever seen that passion reflected back. It’s like driving away with a Ferrari. They have created such a great brand and mission, that now we’ll have to grow into it.”

“This event should be a challenge for other companies in the Twin Cities,” said Jacie Knight, YPC’s artistic director. “These nerds are a shining example of how to help the beleaguered nonprofit world during a very tough time. I wonder what other Twin Cities’ professional communities could do–hotels and resorts could offer board retreats in the off season, law firms could hold pro bono consulting events or ad agencies could have ‘brand-a-thons.’ I just hope that what���s happening here can spark even more creative ways that people can give back by donating their time and skills.”

And although the nonprofits certainly receive enormous benefit during their 24 hours of professional attention, the nerds are quick to say that they take away more than just a warm, fuzzy feeling. “I learn so much at this event,” said Carl Bliss, manager of network interactive media at Northwestern College in St. Paul and a member of the Full Court Word Press team. “It’s great to see how nine other people tackle a problem, and I always walk away with ideas for better and simpler ways to get things done.” Chris Weber, software engineer at The Nerdery and captain of the Drupal Rocks! team, agreed. “I don’t have many opportunities to give back to my community because I’m always so busy. But I’d have to say this is one part honing my craft and one part giving back.”

While the nerds stand alone in this sort of concentrated annual effort, Malmberg gives credit to companies — including VISI, which offers one year of free web hosting to each participating nonprofit, Benchmark Learning, which provides free post-event technology classes, and Arthouse, which donates branded swag such as lunchboxes, t-shirts, and coffee mugs.

And he adds that the event seems to have taken on a life of his own. “We’ve tapped into the natural competitive nature of the nerd community,” he said. “Like everyone, they want to solve problems and do good, but what happens here is bigger than most people can do by themselves, and is really only possible by working with a group. We feel like anything a business can do online, a nonprofit ought to be able to do online, too.”