In the world of work, design is often pigeonholed as a means to create a product, brochure or website. But for the last decade, Stanford University’s design school (“d.school“) has been teaching design—or more specifically, Design Thinking — as a means of innovation.

Using empathy as a starting point and radical collaboration as an organizing principle, “Design Thinking” works through action and prototyping. It can be used by any kind of organization to innovate services, products, or just about anything, really, for human use. Its tools are easy to learn and apply, but its success is dependent upon participants’ willingness to engage with others, to move beyond abstract problem solving, and into the deeper human issues associated with the challenge at hand.

Larger institutions in Minnesota are already incorporating Design Thinking into how they work. “Target has started to create a Design Thinking culture within the corporation,” says Anna Love-Mickelson, a St. Paul-based coach for Stanford’s d.school. “The Mayo Clinic’s Center for Innovation uses Design Thinking as the basis of its innovation approach.”

Now, Love-Mickelson is bringing Design Thinking to the Twin Cities’ independent freelancers and entrepreneurs as well as employees of for-profit and non-profit organizations. In April she launched the first of a series of workshops — aimed at creating innovators rather than any particular innovation — at the new d.school @ CoCo. It’s located at the Minneapolis location of CoCo, a collaborative coworking space in which freelancers and small companies, often tech-oriented, get together and work in a common space instead of at home or at a coffee shop. The workshop drew a full house.

Design Thinking may be a new concept to most people, but Bruce Nussbaum of Business Week thinks it’s already over. While he used to be a Design Thinking advocate, Nussbaum is now a critic.

“There were many successes, but far too many more failures in this endeavor,” he writes in a recent Fast Company article. “Why? Companies absorbed the process of Design Thinking all too well, turning it into a linear, gated by-the-book methodology that delivered, at best, incremental change and innovation.”

Love-Mickelson says that Nussbaum’s comparison between Design Thinking and efficiency-based processes like Six Sigma is inaccurate.

“Design Thinking isn’t a process. It’s not a Six Sigma. It’s a set of tools and a way of being that deliver really powerful and unexpected results.” While she agrees that when used as a “by-the-book” methodology, Design Thinking may indeed produce mainly modest and incremental change, she says it’s also capable of producing “radical, game-changing innovations” in big organizations and small.

She points to Wisconsin’s GE Healthcare, which used Design Thinking to reimagine what an MRI experience might look like for a child. “Children were so afraid they had to be sedated to keep them still,” says Love-Mickelson. “Using Design Thinking, the lead designer Doug Dietz and his team created an experience that so resonates with children that the sedation rate has significantly dropped.”

It’s this ability to create profound change that drew Love-Mickelson to Design Thinking in the first place.

Until recently, Love-Mickelson led a training team at a large financial services firm. “The training we were developing was mediocre,” she says. “So I started doing research to find out how you turn something mediocre into something incredible.”

That’s when she discovered Stanford’s d.school and ultimately became a d.school coach. Now she’s a “jetsetting Montessori mom,” guiding people through Design Thinking around the world. In late April, Love-Mickelson went to Brazil to help a hotel design a better experience for its guests. In May, she’s going to Joplin, Missouri, to help that community–devastated by a tornado last year–design a new high school.

Love-Mickelson sees potential for Design Thinking to help improve the world for people everywhere. “What if we used Design Thinking to redesign the middle school experience? Middle school sucks for everyone. We must be able to do something for our preteens. And how could we use it to redesign the way we interact with food? I can imagine using it to look at how we can make healthy food accessible and not something just for the wealthy.” 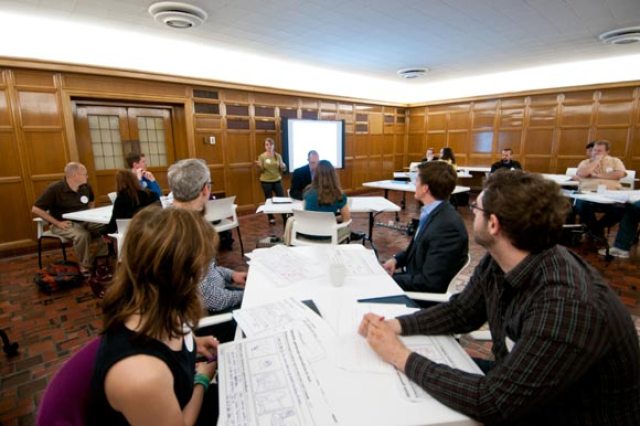 Design Thinking’s applicability to social and infrastructural issues, in addition to business challenges, is what makes Love-Mickelson particularly excited to be able to introduce design thinking to a broader audience in her home community. The upcoming classes she’s offering are open to anyone. Holding them at CoCo–which is already full of creative, networked, idea people—seemed natural. “Part of our goal in offering these experience is to create a community of Design Thinkers so they can serve on each other’s projects,” says Love-Mickelson.

CoCo opened its doors two years ago in St. Paul and last August in Minneapolis. With more than 300 members, the Minneapolis location already has plans to expand. The growing membership reflects changes in the American workforce. As more people move from being employees to being part of a growing contingent workforce, says Kyle Coolbroth, a co-founder of CoCo, the evolution from business-centered to human-centered work is inevitable.

Members of CoCo — many of whom are doing what they love — reflect this contingent workforce. At CoCo they come together for professional and social camaraderie and up to this point, for casual educational opportunities. The d.school @ CoCo presents the first formal educational offerings. Coworking and Design Thinking seem to be a great match.

“We’re creating a transformational space where we get to be human together again. And that’s exactly what’s so exciting about Design Thinking,” says Coolbroth. “Design Thinking can transform you.”

For an introduction to Design Thinking, try a monthly crash course. There are also in-depth workshops covering a different aspect of design thinking in each session. A three-day boot camp, in which participants will address an actual social challenge in the Twin Cities, is scheduled for September 26 to 28. More information here.

Can ‘design thinking’ create a community of innovators?