Did you hear the one about the five friends who started a nonprofit improv theater company?

It’s kind of a long story.

Jill Bernard, education director at HUGE Improv Theater, says that a crazy idea to start a nonprofit improv theater company has proven to be no joke at all, and is already making a big impact on the Twin Cities’ burgeoning improv scene. The group is dedicated to long form, or scenic, improv.

“It’s different from what you might see at ComedySportz or on ‘Whose Line is it Anyway?’ because there are very few or no parameters,” Bernard says. “Short-form improv involves a rule or game that everyone knows going into the show. With long form, you might just have two characters improvising for 45 minutes. It may be a series of scenes with the same characters.”

The company was founded by Bernard and four fellow improvisers: Butch Roy, Nels Lennes, Joe Bozic, and Mike Fotis. (Bozic and Fotis have since dropped out to focus on their work at Brave New Workshop Student Union). After years of performing at venues all over town, they incorporated as a nonprofit, started fundraising and, in December, 2010, opened a 100-seat theater space in Uptown, on Lyndale Avenue near the corner of Lake Street.

“The terrible economy was one piece of good fortune we had,” says Bernard. “We suspect the only reason we got the space was because nobody else wanted it. If it had been a good economy, there would have been no sense in renting to a bunch of actors with no financing. But Julius De Roma, our landlord, took a chance on us.”

The company moved into a space that had previously been occupied by Lava Lounge, an upscale clothing boutique. “It was the kind of store with one perfect blouse on a rack in the middle of the room,” Bernard says. “But it turned out to be perfect for a theater. They had girders for hanging lighting, and one of the dressing rooms, weirdly, already had a full bathroom.”

As to the reason for the ALL CAPITALS shout of the name, she says, “We have a lot of fake arrogance going on. We like saying that it’s HUGE! and then you get there and it’s pretty normal-sized. That’s the kind of thing that makes the five of us that founded it laugh pretty hard.”

The fact that you can open a nonprofit improv theater during a recession, of course, doesn’t mean that you should, but Bernard thinks that HUGE’s timing was perfect. “In the Great Depression, movies became popular, because when the economy is crummy, low-priced entertainment flourishes. Our tickets are five dollars, and pretty much everybody can afford that. We’re cheap laughs for tough times,” she says. 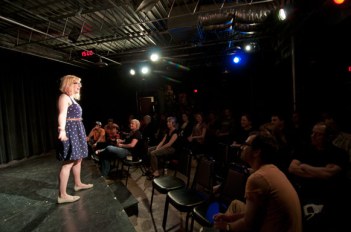 So, how’s business, Jill? Steadily picking up, she says. “Last fall we had a show called ‘Star Trek, the Next Improvisation,’ and our Saturday night shows starting selling out, and now they consistently do that. Friday nights are doing really well, too,” she says, happily pointing out that improv is available every night of the week at HUGE. In fact, the most consistently popular show is Sunday’s “Improv A-Go-Go,” in which the evening’s talent is decided by lottery. “It could be the best improv you’ve ever seen or it could be the worst, but it only costs five dollars, so it’s worth the risk,” she says.

Being a nonprofit has proved to be an organizational benefit. “Most people think it’s cool and they want to help us, and also get a tax deduction,” Bernard says. The group has received donations of lighting from Four Humors Theater, architectural help from Shelter Architecture and construction services from R.J. Marco.

The improv universe is dominated by New York, Los Angeles, and Chicago, with a second tier of touring cities that includes Seattle, Chapel Hill, Kansas City, Boston, Atlanta, Austin, and the Twin Cities. Bernard reports that local improvisers have a national reputation for being particularly joyful and playful, sometimes downright fanciful. Bernard adds, “I also had an out-of-town friend say, ‘You guys really think the Minnesota accent is funny, don’t you?’ ” 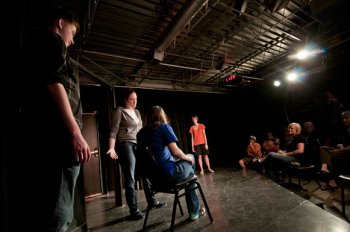 The region’s reputation has grown with touring. “Friends from around the country make a point of telling me how much they love groups from here that have toured in their towns, like Bearded Men, Mustache Rangers, Interplanetary Appeal, Ringo, Gay/Straight Alliance, Lounge-asaurus Rex, The Bennets, Last Action Movie and The Minneapples. Splendid Things are so beloved in Austin that I always feel lucky when we get them back, because some day the Texans are just going to kidnap them,” she says.

While some may think that the stereotypical uptight Scandinavian-descended audience would provide an icy climate for comedy, Bernard claims otherwise.

Bernard is responsible for assisting with artistic direction and artist recruitment for productions, as well as managing the educational arm of HUGE. As education director, she oversees a comedic curriculum that she says has become “insanely popular,” with class offerings for improv basics, how to create characters and scenes, and more.

Education is a consistent theme in Bernard’s career, and she has taught and performed in over 40 improv festivals in the U.S. and Canada.

“Once you teach at one improv festival, you start getting a lot of calls from other ones,” she says. She’ll turn 40 this summer while teaching at the Improvention in Canberra, Australia. She has proudly revealed her “Fifty State Plan,” with a goal to teach improv in every state of the union. “I might throw in the Canadian provinces, too, just to keep things interesting,” she says.

It might have been hard to anticipate this level of improv success for someone who, while growing up in suburban Chicago, managed to miss the Second City experience almost entirely. “They came to my high school in Downers Grove once,” she says, “but I had no idea that they were making things up; I thought it was a sketch they’d written.”

While attending the University of Minnesota in 1993, she was cracking wise in class when fellow student Mike Heinrich urged her to come along with him to a ComedySportz audition. She got the part and never looked back. “All I’d done before that was remotely similar was play freeze-tag at high school cast parties, because that’s what the kids who don’t drink do. But I loved improv right away. It’s the conversation I enjoy having most and the way I enjoy relating to the world.”

When asked about the dearth of women in her field (HUGE’s founding female representation, after all, was only 20%), Bernard has an explanation. “There are more women in classes, but when it comes time for performance-readiness, women have other obligations. When a male improviser becomes a father, he’ll be doing shows the next weekend. Women, not so much,” she says, while observing that “Men are rewarded for being funny; women typically are not.”

However, she points to many strong all-female groups in the Twin Cities, such as the Minneapples and The Bennets, who are shifting the all-male paradigm. “When women are improvising together, something magic happens that you could never imagine.”

And what sort of magic is she hoping will happen with this fledging company?

“We just want HUGE to keep growing. We’re not at capacity, and we want it to expand so that every night of the week is sold out. Add more shows, teach more classes, that’s what we tell each other,” she says. And, on July 20, when she turns 40 in Australia, she’ll have a chance to reflect on this career choice.

“Honestly, this work just feels like what I’m built for. I have a terrible memory, so scripted work is not up my alley. And I don’t take direction well. But with improv, I create these worlds on the spot that exist only for now,” she says.