Downward dog at sunrise on the Guthrie’s Endless Bridge. Tree pose at Target Field. Savasana at First Avenue, with the DJ playing “Purple Rain” as soundtrack. These are just some of the poses — and places — that the buzz-generating Gorilla Yogis, and the loyal tribe that follows them, have experienced over the past two years. And, along the way, they’ve managed to collect thousands of dollars in donations for small local nonprofits.

They do all this with no board of directors or formal grantmaking structure. “We aren’t even a legitimate charity. I’d say we’re more on the illegitimate side,” jokes one of Gorilla Yogis’ founders, Nan Arundel, 31. “We just want to do yoga and do good, and this is a fun way to make that happen, without a lot of administration, structure, or a 501(c)(3) status,” she adds.

Along with Jessica Rosenberg, 43, and Lisa Venticinque, 36, Arundel is one of three “Troop Leaders” of a group that has gained legendary status in the Twin Cities’ yoga community. With a bit of help from husbands, boyfriends, and Arundel’s mother, Lauren Shapiro (who dons a gorilla costume, passes out treats, and babysits the occasional cranky child), the three mount periodic “charitable happenings” that are attended by an enthusiastic, if unlikely, conglomeration of hard-core yogis, parents with young kids, pets, the elderly, and anyone else who just happens to be walking by. (They keep extra yoga mats in their cars to accommodate drop-ins.)

Whatever you do, don’t call them a flash mob. “The point of a flash mob is getting people to stare at you, but our events are felt from the inside out, where you really become part of a group,” Venticinque says. Even in the middle of the street at the corner of Lyndale and Lake, doing yoga among the milling crowds at the Open Streets event last summer? Yes, Venticinque says with a smile, even then.

These women are as unlikely a trio of grantmakers as might ever be encountered in the nonprofit mecca the Twin Cities as become. On a recent sunny afternoon, the trio met to discuss their journey from yoga teachers to community innovators. After recently celebrating their second anniversary, they were ready to reflect on how it all began.

Their first gathering was the brainchild of Arundel and Rosenberg. “We had been talking for five years about weaving the threads of yoga and communities and happenings. The inspiration was an underground dinner party, something that felt sort of rogue,” Arundel says.

That first event was held at the Minneapolis Photo Center to raise money for the global yoga-activists of Mats on a Mission, affiliated with Smile Network International, a Twin Cities-based organization that promotes the surgical correction of birth defects in children around the world. “We had a few posters around town and a notice on Facebook. It just happened that the event was in March, on one of the first mild spring days that year. We were stunned when 250 people showed up,” says Rosenberg. They had giant bowls of bananas on hand, “straight from the jungles of Costco,” jokes Arundel, and their mutual friend Venticinque was there to take photographs. At that event they raised $500 in aid of cleft-palate surgeries, and they’ve never looked back. They’ve continued to offer donation-based events in unexpected places all around the metro, gatherings in which every dollar contributed goes directly to a selected local charity.

There have been Gorilla Yogi events at the Como Park Zoo and Conservatory, the Boys and Girls Club of Minneapolis, the James J. Hill House, the Mill City Farmers’ Market, the Minnesota Science Museum, the Walker Art Center’s Open Field, and the Weisman Art Museum, along with a few “pop up” sessions at local parks. “We never get a park permit,” Arundel confesses. The nonprofits they’ve donated to include Full Cycle, Free Arts Minnesota, Pillsbury United Communities, Sisters’ Camelot, and the Will Steger Foundation.

One key feature of their events is that everyone is welcome. “Sometimes yoga can be so intimidating, with people feeling like they don’t know what clothes to wear, not knowing the names of poses, or not being able to afford a class. We say to just donate what you can. Some people give nothing, and some toss a $100 bill in our jar,” says Arundel. 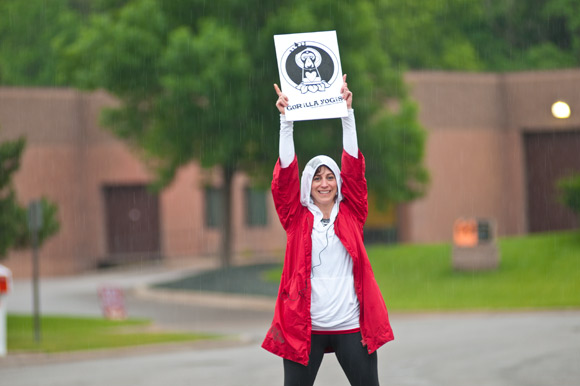 The Gorilla Yogi mystique has been built not only with a welcome mat, but also with a question mark. They purposely don’t reveal the date and location for each event until just a couple weeks before it happens, with the intention of keeping the spontaneous vibe.

“We have people beg us to tell them when the next event will be, because they want to schedule work or vacation around it,” Rosenberg says. “We tell them, it’s OK, if you miss it, you miss it, you’ll go to the next one,” Venticinque adds.

(The next Gorilla Yogi meetup will be at this year’s Open Streets event, June 10. Details are posted on the Yogis’ Facebook page.)

Big splash in a little pond

Even though the designated charity changes with each event, the one constant is that Gorilla Yogi supports local organizations only.

“Our goal is to make sure the money goes right back into the community, to do the greatest amount of good, dollar for dollar,” says Venticinque, adding that they usually select smaller organizations which will be thrilled with the thousand or so dollars they generate. “A big splash in a little pond seems to be our giving plan,” she says.

As averse as they are to creating an unwieldy administrative structure, it’s a blessing that the three have found that they share their duties with ease. Rosenberg provides graphic design, Arundel writes copy and Venticinque supervises photography and manages nonprofit liaisons. All three rotate teaching duties during events. “We have a ‘zero overhead’ mindset, so our promotional vehicles are all free services,” says Rosenberg. “The website was built withWeebly, and we use Facebook, Twitter and Mail Chimp to promote events.”

Their lack of a cumbersome administrative structure allows them to act very quickly. After last summer’s destructive North Minneapolis tornado, they pulled together a “Twister” event at a local park in about a week, raising $2,000 in cash and a truckload of food and supplies for storm victims.

While they’ve developed a number of tag lines, they’ve found that “respect the unexpected” has helped guide their direction for planning events. The phrase has become almost a mantra for the inevitable moments when things aren’t going the way they’ve been planned. At the Minnesota Landscape Arboretum event, for example, the skies opened up minutes into the practice, but soaking-wet yogis begged the leaders not to cancel or move inside. “It ended up being a really magical practice, even if we did get very wet,” says Rosenberg.

The events have grown in scale over the years, and one of the most popular recent sessions was held on a Saturday afternoon at First Avenue, when 330 people attended to benefit the Jeremiah Program. “People were lined up around the block before the doors opened, and it looked like a typical concert audience, except they were all carrying yoga mats,” Rosenberg recalls.

“We filled up the space,” says Venticinque, “and we had to call the owner to get permission to let people on the second level. It still managed to feel very cozy, like a slumber party. Even with some questionable sticky spots on the floor and people spread all over, it was so mellow,” she adds.

Locating workable venues is often more challenging than discovering deserving charities, they have discovered. Sometimes the hardest part is just convincing the venue owners that the event will have a low impact on their space. “A couple hundred people show up, unroll their mats, practice for ninety minutes, and then roll up their mats and leave. The space is left pretty much just the way it was when they started,” Venticinque says.

Still, it’s hard to prepare anyone for the energy generated by hundreds of people gathering to practice yoga in one place. The trio still remembers one venue manager who seemed skeptical of their insistence on a pre-event planning meeting to discuss parking and space allocation.

“I think he thought that 10 ladies with yoga mats were going to show up,” Arundel says, “and when more than 200 people streamed through the door on the day of the event, I looked over and saw that his jaw had dropped. We had tried to warn him, but I don’t think he ever thought that many people would get up to do yoga together on a Saturday morning in a place that really wasn’t designed for it.” 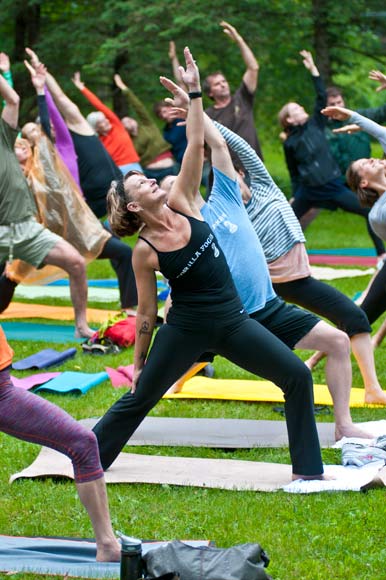 Photo by Bill Kelley‘Yoga out of captivity’

In practicing what they call “yoga out of captivity,” the Gorilla Yogis have discovered that they’re doing much more than giving a hand to causes they cherish. “It’s also been an incredible way to build community,” says Rosenberg. “People usually go to one studio, see the same people and do everything in their practice the same way. This is a way to be out-of-the-box in a community of different, but like-minded, people.”

So far, the experience is still rewarding for the three women. “It feels really good, because we’re helping these organizations that are doing good work to make our community more kick-ass and welcoming. I love living in the Twin Cities, especially because of all these amazing groups. And we want it to stay as fun for us as it is for the community,” Arundel says.

Keeping the fun and the flow in this venture will, they realize, remain a challenge. “Sometimes there is a momentum that says ‘grow, expand,’ but we want to keep it simple and easy and fitting with the fabric of our lives,” says Venticinque.

“As soon as it starts happening and we’re with all those people, practicing yoga together, it’s so much fun. We just float out of the space when it’s over,” Rosenberg says, and her two fellow Troop Leaders nod their heads in agreement.