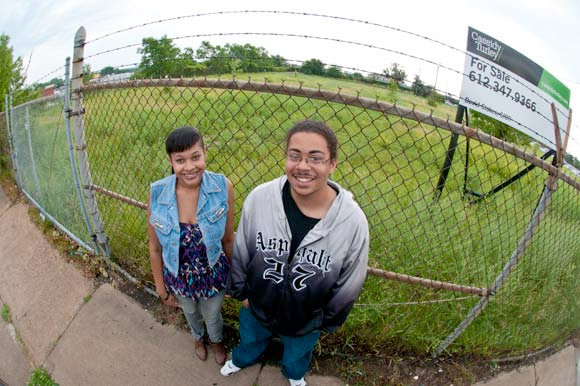 Photo by Bill KelleyTanisha Brandt and David Forrest want to come back after graduation to help with the project.

Two years ago a piece of green plastic taped to a 3-D model of the Central Corridor light rail transit route caught the attention of a few Gordon Parks High School students as they identified their school on the model. When they asked if the green meant a park was planned for the two vacant lots behind their school, located on University Avenue between Hamline and Lexington Avenues in St. Paul, they were told it was a mock-up, not part of any particular plan.

Undaunted, the students started thinking about how they could turn the 2.5 acre site into the only greenspace within a half-mile radius.

Since then more students, along with faculty and a growing number of other supporters, have continued to run with the idea they now call the Three Ring Gardens — named for the traveling circuses that performed on the land for almost a century.

More than a park, their vision is for an urban agriculture education program and community space for public art, sports, and outdoor performances that could be unique nationally and put more green in the Central Corridor’s “green line.”

A Magnet for the Community

“The immediate benefit for this dense population right on this city block is access to greenspace,” said Tom Davies, a Gordon Parks High School teacher who teaches a human geography course that focused on TRG this year. “The idea also is to have raised bed gardens available for Skyline Towers.”

TRG organizers are seeking more community buy-in along with supporters willing to invest not only in land and operation costs but in the students at Gordon Parks — an alternative St. Paul public school — who are learning as they work on the project.

St. Paul officials have expressed interest in the project and although funding may not be immediately forthcoming, organizers hope to get onto the city’s parks plan for Central Corridor greenspace, said Paul Creager, Gordon Parks High School curriculum and media arts coordinator, who co-leads the program with school principal Micheal Thompson.

“It’s a very exciting project,” Homans said. “The partners are great. The ideas are great. The participation of the young people at Gordon Parks is great. The availability of land is wonderful. The challenge is, these are expensive.”

A Myriad of Functions

With community input, TRG developers and three landscape architecture students from the University of Minnesota group Students for Design Activism created a conceptual plan for the gardens focusing on education, sustainability, and community development and providing space for food production, ecology, storm water management, and alternative energy research.  The plan also includes an amphitheater, an outdoor classroom, a basketball court, and other mixed-use recreation space.

While it’s not as high-profile as the High Line, a garden created around a historic elevated freight rail line in Manhattan, the TRG plan has holistic and integrative programming imbedded into it that other projects don’t have, in the form of walkability, access to and education about fresh food, and other benefits, said Emily Lowery, who has worked on TRG while completing a U of M master’s degree.

The space is also about bringing people together, she said. “It’s no longer about these isolated, alienated groups or geographic locations,  it’s more now about actually creating a centralized destination and turning something that was kind of sterile into something generative and beautiful.”

The view through a chain-link fence at the southern edge of the Gordon Parks High School grounds of what could become TRG is now of a weedy parking lot where an abandoned car rests. Further to the south is a grassy hill where traveling circuses performed from the 1800s until the 1960s. Records going back to at least the 1870s show that no buildings have stood on the lots, located on North Griggs Street and bordered by the high school and St. Anthony Avenue, Davies said

Unlike typical parks with vast lawns, Creager and Davies envision TRG as a multi-use space that would partly serve as an urban agriculture learning laboratory and which could provide jobs for the Gordon Parks students who would maintain it.

“The Students Want to be Part of Something Big”

Through its involvement with TRG, Gordon Parks High School is doing what it asks students to do: transform themselves and be open to reinvesting in their education, Creager said.

“We’re looking at these properties that we feel are underutilized and we’re leveraging any resources we can to improve them,” he said. “The students want to be part of something big. … They want to be part of things that are inspiring and I feel like the project reflects what we want them to do with themselves, too.”

David Forrest, a senior scheduled to graduate in August, was skeptical about TRG when he got involved in January. 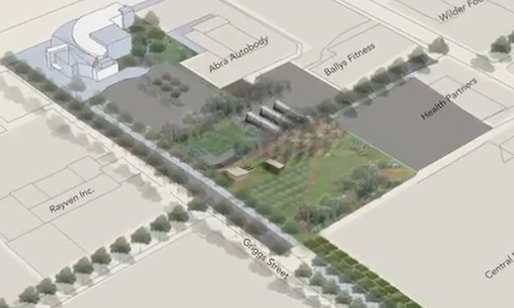 “To be honest when I first started the Three Ring Gardens I wasn’t really into it,” said Forrest, who is from North St. Paul. “I didn’t think we were going to get too far with it but as we continued to go along with the project I was learning more, I was experiencing more, and it just opened up a lot of new doors to me.”

Forrest was one of about 14 students in Davies’ human geography class this year; 40 have been involved since the project’s inception. The students created a promotional video about the project with interviews from community residents and leaders.

West St. Paul resident Tanisha Brandt, who also took the class and graduated this year, sees advantages for both the community and the high school.

“I think University and the area that my school is located in needs a place where the community and get together and just hang out,” she said. “It would be good for the students because we’ll have the garden. I want to say they will have job opportunities and stuff like that. And kids wouldn’t have to walk that far to go to a park. I think it would bring the community together a lot.”

Citing the advantages for both students and the community, TRG organizers hope to raise enough interest in the project to attract a buyer. “We don’t have any capacity to buy it,” Davies said. “We’re going to drum up interest and help to connect the dots.  We can harness the education power of this and move the idea forward.”

TRG could help the Twin Cities once again set a standard for innovative park systems, Lowery said. “There’s a whole myriad of public benefits to this and in that way I think the public/private partnership could really make this greenspace something that is entirely nationally distinctive and unique, because it really would be setting its own precedent,” she said. “There’s nothing else like it out there.”

(On July 10, a giant papier-mache sculpture of a tree, which Gordon Parks High School leaders hope will draw attention to both the school and the Three Ring Gardens project, was “planted” outside the school. The sculpture, created by artist Chris Lutter-Gardella and 10 Gordon Parks students, was commissioned through Irrigate, a creative initiative to create a St. Paul cultural corridor as the LRT is installed. Seen by some as a learning tree, the sculpture will be displayed in view of the proposed TRG until late August, Creager said.)

The view of the TRG site from behind Gordon Parks High School hasn’t changed yet but students continue to see green there, enough so that some, including Forrest and Brandt, want to come back after graduation to help with the project.