Planners, architects, and developers, as well as students, professors, and theorists have long postulated, pontificated, and published on the components of enticing urban places. Peter Remes simply makes it happen.

Simply, of course, is a vast understatement. And yet, in three short years, since Remes (pronounced rem-ish) founded First & First (with the tagline Creative Real Estate) in 2010, he’s radically transformed several downtrodden sites in Minneapolis into multi-use, aesthetically inviting, creative hubs for work and play. St. Paul is next.

“Plenty of people have talked about and written articles about how cities should look,” Remes says, “and then it falls woefully flat. I think it’s due to a lack of vision, a misreading of the culture and a misunderstanding of what people really want. This is a huge generalization, but most developers look back at what has worked and then project that into the future. That’s fine. But there’s nothing transformational about it. There’s little innovation and very little risk.”

Remes’ work is all of the above. His first project was 1400 Van Buren St. N.E. in Minneapolis, a former textile factory he transformed into a 12-tenant office building. Then Remes reinvented the former Theatre de la Jeune Lune on First Street in downtown Minneapolis into the event space Aria. Last year First & First presented musician and cyclist David Byrne’s “Playing the Building” project in Aria, which has only otherwise been installed in the Battery Maritime Building in New York City, the Roundhouse in London, and Färgfabriken in Stockholm, Sweden.

At 26th & Nicollet in Minneapolis, Remes redeveloped a towering ice-block warehouse into the Vertical Endeavors indoor rock-climbing center. Also on the site are restaurants and a 7,000-square-foot public plaza for socializing, relaxing, and music concerts. The plaza includes a sculpture by Zoran Mojsilov and seating areas constructed partially with stones from the iconic Metropolitan Building (torn down in the 1960s during a short-sighted push for “urban renewal”).

History moving into the future

The components of a Remes project, then, are becoming apparent: The creative and adaptive reuse of historic, often-forgotten buildings; airy, cleanly designed interiors that attract tenants perhaps best summed up as cultural creatives; original art; and outdoor public areas that draw crowds and support events. In other words, Remes’ work is not only transformational, but also aspirational.

“I really try to take history and move it into the future,” he explains. “I want to respect the historical aspects of a building and site, but my approach is also to take historicism and fuse it with modern-day ideas, including arts and culture, architecture, and features and approaches that will give the project a unique energy.” 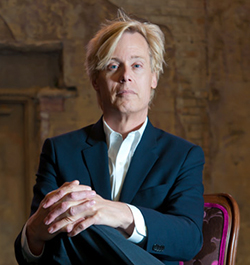 When selecting a new building or site to pursue, he starts with his own physiological response to it.

“I’d love to tell you I’ve got this great big formula and all these boxes are checked. It’s absolutely not the case. It’s really just a gut feeling,” he explains. “If I walk inside and think to myself, ‘I can do something with this,’ or that it has amazing fundamentals like infrastructure or bones, or I know I can pull it apart and put it back together again, I go for it.”

In other words, he adds, “I want to activate what are often derelict properties, and turn them into places for the community, where people will want to spend time and perhaps even be inspired by what they see.”

Next up: the redevelopment of a car dealership at 1891 Suburban Ave., in St. Paul into a retail project; transforming the 89-year-old commercial building on the southwest corner of Aldrich and Glenwood avenues across from International Market Square in Minneapolis into a 21st-century hub for design firms; and reinventing 558 Vandalia St., along I-94 in St. Paul, a 5.3-acre site that encompasses nine buildings and an old water tower.

‘I’ve been entrepreneurial all my life’

When asked how he’s reached this point, doing what he does, and so successfully, Remes starts with “I’ve been entrepreneurial all my life.” A native of Highland Park in St. Paul, where he worked in his dad’s drugstore and delivered the Pioneer Press, Remes started his first company, Midwest Outdoor Advertising, while in his 20s and attending the University of Minnesota. He ran the company for 16 years. After selling it in 1999, he purchased, merged and sold other advertising companies.

“When you’re young and naïve and entrepreneurial, people say ‘Don’t do that!’ And there’s merit to the advice. At the same time, what you don’t know and need to learn can be valuable,” he says. “Also, I think being genetically coded to be optimistic and look at what’s possible helps overpower all of the doubt. I don’t want to say we’ve got it all figured out. We don’t. It’s trial by fire sometimes.”

The power of art

Remes finds much of his inspiration in contemporary art, which for him seems synonymous with ideas.

“I’ve spent time moving around the world looking at new ideas in contemporary art,” he explains. “I’ve done countless studio visits, been through countless museums and private collections, and spent a lot time in different parts of the planet interacting with and dialoguing about ideas. That’s intuitively trained me to bring ideas to the forefront in my projects. It’s maybe disruptive to the status quo. But I don’t have 20 years of experience. So I just do it in a way that seems to be symbiotic or natural to me.”

He notes “iconic examples of innovative, visionary thinking in the Twin Cities, in all kinds of industries — medicine, science, tech, art, music.” But after only finding “slivers” of “environments that were inspiring to me in terms of creating a different atmosphere for entrepreneurs and small businesses,” he started First & First. “I was betting there were people out there who feel the same way I do.”

That so many of his projects begin with derelict or distressed buildings ups the ante.

“We take on projects that are sort of all bundled up in knots,” he explains. “We start untying the knots and making sense of things. We buy a lot of these properties from banks. And by the time the bank owns there, there’s not a lot of historical information or documents. So we sort of start from scratch. Vandalia’s that way.”

His gut response to that mega-project?

“Super-complex. I loved it. It’s a disaster. But the fundamentals of the project are fantastic,” Remes enthuses. Part of the site includes a former mattress company, he explains; another portion burned down. Other “historical pieces are incredible and amazing.” The location is “weird, but with a lot of visibility. And we’ve got some great plans for the water tower. We’re excited about developing the site into a creative hub, with similarities to Broadway and Nicollet. We’ll have an amazing outdoor space, and we want to land a craft brewery.”

In charge on both the macro- and micro-levels of his projects, Remes says, “I’m obsessively involved in every detail. Thank goodness I don’t require a lot of sleep. But the more I do this, the more my subcontractors and my team understand our focus, our vision, what are we trying to accomplish. We have a disciplined approach, and we pull ideas from all over the world. A big part of my drive is painstakingly making sure I’ve made the right choices.”

That includes curating his tenants. “I say no a lot. It’s a difficult conversation sometimes. But the mix of tenants is an ecosystem. I want open-minded, curious people who like to collaborate and participate in a bigger conversation.”