What is academia’s role in solving the pressing issues society faces? Ask anyone at the University of Minnesota involved in the more than 300 University-driven centers, institutes, and programs with roots in research, education, and outreach, and they’ll attest to the benefits of their work.

The Northside Job Creation Team (NSJCT), for example, a program led by the Urban Research and Outreach Engagement Center (UROC) with the City of Minneapolis, has a goal of attracting 1,000 sustainable wage jobs to North Minneapolis by 2018. The Center for Transportation Studies’ Toward Zero Deaths partnership with the State of Minnesota and federal agencies has been working since 2003 to raise awareness of traffic safety issues, and reduce the number of deaths and injuries resulting from traffic accidents in Minnesota.

University groups are doing good work, according to Andrew Furco, associate vice president for the University’s Office of Public Engagement (OPE). But there’s a problem. “Interdisciplinary collaborations, and communication to the public regarding the outcome and impact of the work, could be improved.”

Design Thinking may be the answer. “Design Thinking is the creative approach we’re using to explore new ways of working and collaborating at the University,” says Virajita Singh. She teaches design thinking in the College of Design and is facilitating OPE’s three-part Design Thinking Series for the Issue Area Networks (IAN).

As defined by the Design Thinking @ College of Design website, “Design Thinking is an emerging field applying the tools and processes from the design disciplines (architecture, landscape architecture, interior design, graphic design, product design, apparel design and others) to complex, system-wide problems.” The issues or IAN the OPE series is currently investigating include the arts, diversity, sustainability, economic development, food, poverty, and transportation.

What is Design Thinking?

The OPE series “is organized around specific societal issues and brings individuals, units, departments, programs, and colleges at the University together around an issue area,” Singh continues. “These ‘hubs’ are intended to connect existing networks and community engaged work to accelerate on-the-ground impact.”

Singh says the OPE series uses a straightforward formula for Design Thinking: empathize, define, ideate, prototype, and test. She believes these steps offer a common process for solving problems in new ways that can be applied in organizations, businesses, and institutions — regardless of product or service.

In essence, Design Thinking, whether deployed at a museum or a university, assumes no one person has all of the answers. The process is collaborative in nature, and requires openness and leaving preconceived notions about solutions behind.

“It allows participants to give input in creative ways and contribute to the picture we’re creating together,” Signh says. “It also pushes creativity by introducing how to think like a designer and explore new levels of engagement to reach solutions.”

More than 75 attendees from various University groups have attended the first two sessions. Neither the public nor students are involved in the process — yet. The University wants to understand how these issues are being addressed internally before involving external groups. 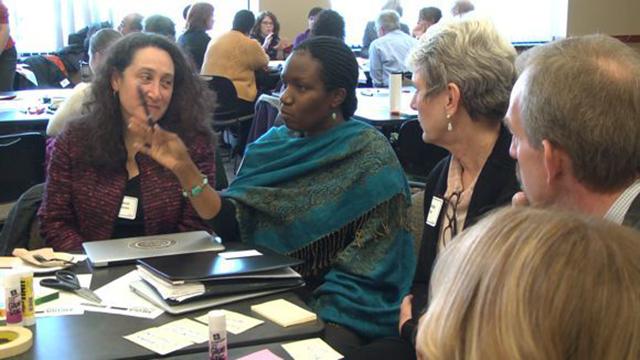 Courtesy of The Line
The poverty group at work.

During the first OPE session, in December, interdisciplinary teams organized by nine focus group areas created prototypes of the existing collaborations across the University’s departments and groups. The economic development focus group, for example, termed its prototype “the current,” to evaluate how and why existing efforts toward economic development aren’t always well-understood by the public.

During the February sessions, teams began with their defined prototype, then visually mapped the groups and collaborations for each issue. The economic development team placed UROC, the Center for Urban and Regional Affairs (CURA), and the Center for Integrated Leadership (CIL) at the center of their map. These groups are viewed as “hubs” because they currently communicate and partner with the most groups in their focus area.

As the teams added other University groups to the map, and used arrows to further define connections between the hub and outer ring groups, opportunities for improvement became clear. In the economic development area, the team cited research groups like the Natural Resources Research Institute (NRRI) and theBusiness and Community Economic Development (BCED), as doing good work, but not being strongly connected to the whole.

Consensus in the group was that if research from groups like NRRI could be applied to more University initiatives, their work would have more widespread impact. In turn, if program needs, results, and community impact were directly fed back to the research group, that process would align research and initiatives, and translate into greater impact for communities.

During the final workshop in April, attendees will look at Design Thinking workshop outcomes from the two prior meetings and determine what changes will be made to existing systems at the University. These changes could occur in department organization, communication processes and tools, or partnerships. The recommendations will also include an implementation plan for the University and set clear ways to measure the University’s work in direct correlation to the IAN or societal issues.

Observations from the series to-date center around the realization that issues are more complex than their origin point. For example, the food focus group cited efforts to bring healthier food options to low-income urban areas. Programs exist to stock the shelves, but this food remains unused if residents lack the transportation, or funds for transportation, to get to the foodshelves.

Nonetheless, attendees of the February session were optimistic about discovering the power of interdisciplinary collaboration through Design Thinking. Merrie Benasutti, Associate Director, Student Initiatives at the Center for Integrative Leadership at the University, says that “To address global, complex challenges such as poverty, food security, etc., we will need to use multiple tools and resources to foster collective action across University schools and departments to fuel change. These complex problems are beyond the resources or knowledge of a single discipline or department to address.”

“The Design Thinking process,” she continues, “has offered us an opportunity to consider new ways to come together, build strategic relationships, reflect on issues, and design potential new structures and decision-making processes. These are all integrative leadership practices and leadership is fundamental to making progress on long-term, complex challenges.”

“As we implement the framework for an improved structure supporting issue-based solutions across the University based on the Design Thinking series, we’ll outline who should be involved and how it will work, including how to pool resources,” notes Furco.

Design Thinking, Furco adds, effectively combines the work of various University groups for greater impact on communities. The OPE series, he adds, “is not about starting something new. It’s about connecting existing University efforts for greater understanding of issues in the greater Twin Cities community, and expanding our collaborations to increase their impact on behalf of the community.”

This article is reprinted in partnership with The Line, an online chronicle of Twin Cities creativity in entrepreneurship, culture, retail, placemaking, the arts, and other elements of the new creative economy. Jennifer Gilhoi is a Twin Cities-based communications specialist and blogger at SparkTrack Consulting. She creates public relations and social media campaigns for clients in the architecture, design, retail, and fitness industries.