In the 1980s, Block E (between 7th and 6th Streets on Hennepin Avenue) was a little hotbed of Minneapolis bohemian street life: Rifle Sport Gallery and Moby’s marked the hipster-to-gangster range of that grubby and problematic but beloved piece of real estate. Then the city demolished the block, replacing it with ill-imagined and hopeful initiatives that never took root — until now.

The Mayo Clinic recently announced plans to open a 20,000-square-foot sports medicine facility in old Block E, which will now be called Mayo Clinic Square. The $50 million remodel, to be completed later this year, will also incorporate practice facilities for the Minnesota Timberwolves and Lynx. Arguably, Minneapolis artist Joan Vorderbruggen and her Block E “Made Here” project last fall planted the kiss on the lips of Sleeping Ugly and reawakened the space to its potential.

“Made Here” included 30 visual displays of work by local artists in Block E’s windows — which most passersby weren’t aware even existed. Commissioned by Hennepin Theatre Trust, “Made Here” was launched in conjunction with the Downtown 2025 plan to invigorate the shuttered streetscape for downtown residents, property owners, artists, and visitors.

While initially too busy with her full-time nursing career and popular Artists in Storefronts projects to take on “Made Here” — Vorderbruggen says she was also “intimidated” by the prospect of the project — she eventually changed her mind. She realized, in part, how “Made Here” would benefit the printmakers, installation artists, writers and book artists, actors and dancers, textile makers, and painters involved in the project. She also recognized how the project could help reinvigorate that section of Hennepin Avenue.

“I realized it was something I had to do, intimidated or not,” she says. Vorderbruggen and the other artists worked at a “wicked pace,” she says, to complete the project on time.

“I was exceedingly proud of the outcome, and the biggest reward for me was witnessing the public’s reaction first hand. It was magical for Block E to be a source of beauty for the community, if even for a short time.” 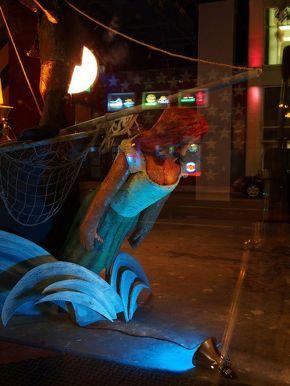 Courtesy of the Line
Erik Pearson’s window for “Made Here”

While attending the opening celebration for “Made Here” last September,Tom Hoch, director of the Hennepin Theatre Trust, was lingering at the bus stop on 7th Street when a woman asked him, “Can you smell the ocean?” He turned and saw artist Erik Pearson’s character-filled wooden ship listing in one of Block E’s windows. “That right there was everything,” Hoch says. “That changed the whole conversation. Imagine what could happen if that happened all over town?”

Before the success of “Made Here,” Vorderbruggen had a stellar track record of managing storefront projects in South Minneapolis through her popular Artists in Storefronts initiative.

“An ongoing project in the Whittier neighborhood,” she writes on the website, “Artists in Storefronts aims to work with neighborhood organizations, artists, and local businesses in an effort to promote creativity, revitalize local economies, and provide everyone with equal, open access to art.” Artists in Storefronts launched in 2012. There have been five editions so far.

Vorderbruggen arrived at the storefront idea organically, through her own work and history. Always a thrifter and sewer, she began designing and creating slip dresses she marketed under the fashion line Lollycopter. One day she was coming out of Smitten Kitten, which carried the line, and “noticed their storefront could use some love.”  She pitched the owner a window concept.

“She loved it. Customers loved it. Sales increased. And I began creating new, wild, visual displays every month or so for more than a year,” Vorderbruggen says. “It was work that I absolutely loved. I really fell head over heels with the medium.”

Lollycopter expanded to include window design. Then she had the idea to use vacant storefronts as exhibition venues for others’ art. Vorderbruggen researched and developed a template to implement a storefront project in 2011. She pitched the concept, timeline, and budget to the Whittier Business Association during her lunch hour, while wearing her nurses’ scrubs. It was a go.

Since then, Artists in Storefronts projects have been created by more than 160 emerging and professional artists, ranging from 5-80 years of age. More than 74 vacant or underutilized storefronts or walls have been transformed into exhibition space. In addition, seven vacant commercial spaces have been leased for projects. The initiative has resulted in permanent murals as well.

Public walking tours of Artists in Storefronts exhibitions address a goal of the Whittier Strategic Plan Commercial Corridor, by connecting and highlighting areas of the neighborhood. The initiative has also hosted live performances, and participated in the 2012 Northern Spark.

The current and fifth run of Artists in Storefronts, which wraps up March 28, is called “Cineteca.” Curated by Vorderbruggen and multidisciplinary artist Jaime Carrera, “Cineteca” showcases artist-created short films showing on flat screens in Whittier storefronts for public viewing round the clock. 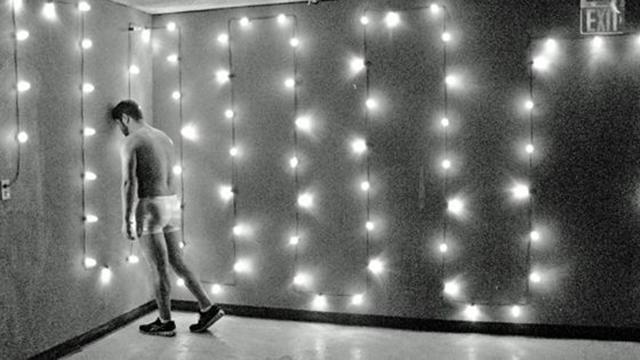 Courtesy of the Line
Still from Jaime Carrera’s film “Felix”

The success and vitality of Vorderbruggen’s Artists in Storefronts inspired Hoch to ask her to tackle the Block E project. “My sense is that artists have the capacity to address urban issues in unique ways that we more pedestrian people haven’t thought of,” Hoch says. “Giving them a playing field is good for the city.”

Block E was a perhaps a difficult playing field, he adds, but “the artists’ work there transformed the site. They gave business people and planners a perspective on the value of art to the city.”

Creating opportunities for other artists

Vorderbruggen is now working full-time for Hennepin Theatre Trust. She recently facilitated another window project for the organization associated with the run of the Tony Award-winning Broadway show “Peter and the Starcatcher,” which opened earlier this month at the Orpheum Theatre. The window, located in the Mitchell Building, was created by emerging artists Tim Carroll, Daisy Lysne, and Ursula Simmer, with the help of Calvin Hafermann, a student at the FAIR Downtown School.

Vorderburggen’s also developing the next iteration of “Made Here.” She’s working with a team of designers and sewers to create a kinetic sculpture out of repurposed promotional banners. She’s also creating a tool kit for implementing storefront projects.

She’s driven, she says, by creating opportunities for artists’ work to be seen among diverse publics. “So many artists I know need a bigger audience,” she says. “It’s a huge motivation to me, to offer them the opportunity to showcase work in the public sphere.” Conversely, she adds, “We all have a right to be exposed to beauty and creativity, all throughout our day.”

“I wish everyone wanted to get out of the studio, the gallery, the museum and beautify an alternative space with their work,” she adds. “Imagine what our world would look like if that started happening like wildfire? Man, to me, that would be absolute heaven.”

Ann Klefstad is a longtime arts writer who served as the founding editor of the online journal mnartists.org and was the arts and entertainment reporter for the Duluth News Tribune. She is also a sculptor interested in the give-and-take of collaboration on public art commissions, and has built works for the cities of St. Paul, Minneapolis, and Duluth.