No one could ever accuse Twin Cities’ residents of indifference to public broadcasting. With 1.3 million viewers onscreen and online, Twin Cities Public Television (TPT), headquartered in St. Paul’s Lowertown on the Green Line, is already one of the country’s most popular PBS affiliates. Still, while TPT boasts 90,000 members, only about 200 are between the ages of 18-34 — that demographic sweet spot known as the “millennials,” “Gen Y,” “Next Gen,” or “digital natives” that media is continually trying to snare.

Enter Rewire, an ambitious “cross-platform” initiative innovated by TPT to speak directly to millennials — and bridge and reinvigorate TPT’s programming.

“Rewire is a hub for thoughtful experimentation in content, revenue, marketing, engagement, and more,” explains Andi McDaniel, Rewire’s overseer. “It’s also a department that’s strategically focused on gaining support from digital natives and those who think like them.”

Rewire has already launched its ebullient website, with posts on “Sherlock” fashion — the wildly popular show stars Benedict Cumberbatch and Martin Freeman — the hilarious “11 Things We Actually Kind of Liked About the Polar Vortex” (some of which is not recommended for trying at home), and the “Top 10 Greatest Sesame Street Musical Moments.”

Beginning May 30 at 9 p.m. CST, Rewire’s new flagship program, “TV Takeover,” debuts. The ambitious five-part Friday evening series will simultaneously broadcast and stream an hour’s worth of original multimedia content produced or curated by some of the Twin Cities’ highest-profile creative organizations.

The show, according to a press release, will include “stories, skits, poems, short films, animations, and explorations” from Northern.Lights.mn (which sponsors the annual Northern Spark festival), MPLS.TV (a local video production network), the artist-led design studio Works Progress, Springboard for the Arts, and Saint Paul Almanac (a literary guidebook to the city).

At the center of a digital universe

What’s stopping millennials from tuning into these organizations’ websites or YouTube channels to consume their content a la carte? McDaniel gets it. She’s working to position Rewire (and by extension TPT) as a centralized source of original (or nearly original, as some of Rewire’s material is curated from its participants’ “vaults”) content from key creators. Rather than spend hours combing the Internet for the most engaging bits, viewers can visit Rewire’s webpage or tune in to “TV Takeover” and find the work already done for them.

Unfortunately, not just online video aggregators and independent content producers are competing with TPT for eyeballs. Netflix and Hulu — outlets that, in addition to offering major-studio movies and original TV shows not available to public television networks, also carry big-name public-tv shows like “Sherlock” and “Downton Abbey.” Digital natives are far more likely to use such subscription-based, mobile-friendly platforms.

“We used to be a critical intermediary for high-profile shows like ‘Sherlock,’ ” says McDaniel. “It’s crucial for us to find ways to demonstrate that we still play an indispensable role in making that content available.” 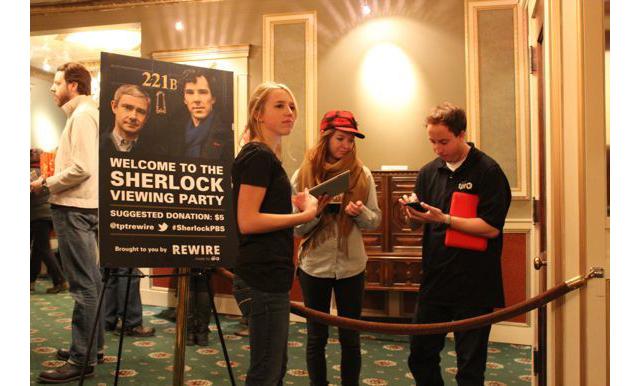 By connecting current TPT viewers — and, Rewire hopes, new consumers who might not have turned into TPT in the past — with original, locally sourced and produced content, Rewire may at least convince millennials that there’s more to public broadcasting than well-produced British dramas.

Another variable is in play, as well. TPT might be a model for other PBS affiliates, but its enthusiastic membership is a double-edged sword.

“We are trying to strike a delicate balance between honoring our long-time supporters and attracting new ones with a different approach — that our base may or may not appreciate,” McDaniel explains.

“This sometimes makes it hard to take risks,” admits McDaniel. Rewire is supported by the John S. and James L. Knight Foundation and other donors, and was envisioned as “a sub-brand that would allow us to take those risks and express an authentic voice,” she says.

And even if TPT’s “base” never really enters the Rewire fold, the new initiative may well build a new foundation of long-term support for TPT.

“There is a big group of people, skewing younger, that expects authenticity, interaction, playfulness, and surprise,” says McDaniel. “They’re a great fit for PBS … we just have to open a different door to let them in.”

That door is a “funny, weird, maybe even irreverent” take on public broadcasting, McDaniel says. Like its audience, Rewire’s staffers and contributors are 20- to 30-something creatives “who want a less serious side to PBS,” she adds, “and who don’t think of content as a TV show that comes on at 5 p.m., but as great video that’s easy to find and share.”

That content might include creating “The World’s Most Serious Debate: Minnesota vs. Wisconsin,” or sharing a video that re-enacts a hypothetical fight between Mr. Rogers and Julia Childs.

‘TV Takeover’ and beyond

“TPT is the only public television station I know of that has carved out a space specifically for engaging digitally native audiences,” says McDaniel. As such, Rewire could “help create a model for other stations to follow.”

With additional funding, the Rewire crew would love to turn “TV Takeover” into an annual series. But for now, Rewire is focusing on “nimble” easy-to-produce digital content like its recurring “Are You MN Enough?” The series, which will begin an Indiegogo crowdfunding campaign later this month, curates producers’ views on everything from winter living to the outmoded stereotype that the state is ethnically and culturally homogeneous.

Longer-term, McDaniel hopes to create more TV-friendly content with Rewire. “Even for so-called digital natives, TV continues to have a very special quality to it … being on TV is different from being on the web,” she says.

Still, Rewire may be just what TPT needs to emerge from the ongoing digital shakeout as a stronger, more innovative content producer.

Brian Martucci is The Line’s Innovation and Jobs Editor, and frequently contributes feature articles to the publication.

How Rewire — and Benedict Cumberbatch — are enticing millennials to TPT