Whether she’s scooting across town for a meeting about Rock the Garden, bopping over to First Avenue to catch a band, or heading to the Fitzgerald Theater to live-Tweet the Wits radio show, Ali Lozoff rarely drives a car. She doesn’t own one. Yet, as group marketing manager for Minnesota Public Radio and American Public Media, Lozoff’s on the go — a lot.

She also lives in Uptown Minneapolis and works in Downtown St. Paul. But she’s gotten around just fine in the Twin Cities without owning a car for more than 25 years. She relies on Metro Transit.

Lozoff doesn’t profess any particular disdain for cars. She will happily accept a ride from a friend when it’s convenient. But after a quarter century, she’s found public transportation — trains and light rail — are often the easier option, especially in winter.

She once owned a car, when she moved to the Twin Cities in 1988. But “the snow emergencies were so terrible I happily got rid of the car, and said I wouldn’t have one again until I had a garage to park it in,” she says.

While winters in Minnesota haven’t gotten any better since the late-1980s, public transit options have. It’s those frozen mornings when the air fills with the sounds of ice scrapers on windshields and muttered curses under frozen breath that Lozoff says she is especially appreciative of Metro Transit to get her around town.

“I just walk by in my hooded puffy coat and get on a bus that’s already heated and head downtown,” she said.

Embedded in the community

While her friends are white-knuckling it in traffic, Lozoff might be buried in a book or quietly decompressing from a busy day. More likely, she’s keeping up with her Twitter account — @AliLozoff — where she often recounts her colorful experiences on public transit.

“I see little vignettes and little snapshots play out on the bus every day,” she says. “Pretty much every day there’s something I have to tweet about.”

She watched one relationship blossom from casual flirting to dating to becoming a family with a toddler. She’s seen heartwarming acts of kindness and courtesy along with moments of conflict and despair.

“Tension can get high on the bus,” she says. “I’ve seen some real clashes of cultures. I’ve seen people not respect each other. You are definitely in contact with your community in a way that being alone in a car doesn’t really allow you to do.” 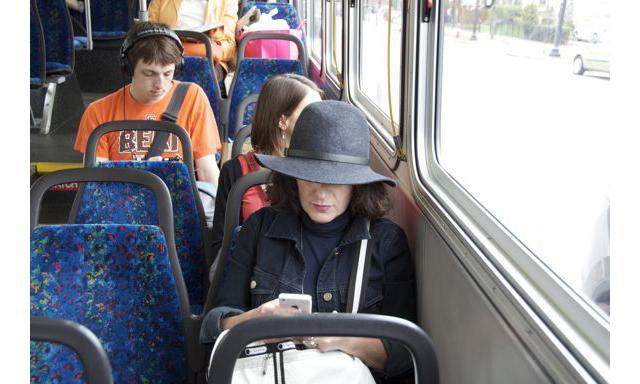 Photo by Kyle Mianulli
“Pretty much every day there’s something I have to tweet about.”

Sometimes that contact with the community gives Lozoff a unique peek at what the public is saying about MPR’s radio programming. She’s usually a quiet observer on the bus, and will sometimes listen as others discuss that day’s radio show, noting what went over well and what did not.

From convenience to lifestyle choice

The longer Lozoff goes without a car, the more reasons she finds to avoid getting one. What began as a matter of convenience, she says, is now more of a conscious lifestyle choice. Compounding environmental concerns make it even harder for her to think about caving in and purchasing a car.

“I keep waiting for some technology that’s affordable to really come along and change the dynamic,” she says.

A different sort of innovation is also making it easier than ever to get away without a car. Services like Car2Go make having a vehicle at the ready a real convenience.

Though she may only use them a couple times a month, Lozoff says those services are “game-changers.” In addition to being able to take home the big jug of laundry detergent from the market on occasion, Lozoff appreciates the spontaneity Car2Go allows.

There is one way Lozoff might own a car. She could soon be inheriting a 1952 MG convertible that her uncle built from the ground up. She wants to keep it in the family and take him for joy rides around the lakes when he can’t drive the car himself. But that’s about it.

Public transportation is all she needs to traverse the cities. If more people would give buses and trains a try, she says, the city, our environment and public health would all be better for it.

“I am not a hardy person,” she says with a laugh. “I am a wimpy person who wears high heels wherever I go. If I can navigate this city all hours of the day and night on a bus, then anyone can do it.”

This article is reprinted in partnership with The Line, an online chronicle of Twin Cities creativity in entrepreneurship, culture, retail, placemaking, the arts, and other elements of the new creative economy. Kyle Mianulli is The Line’s development news editor.

Car-free and carefree in MSP: Why Ali Lozoff kicked car ownership to the curb