Solar power isn’t just for southern locales anymore. According to Aladdin Solar, LLP, one of the Twin Cities metro’s growing solar companies, Minnesota actually has the same or better “solar resources” than most of the southeastern and northeastern U.S., “with more ‘peak sun hours’ here (on an annual basis, 4.6 hours daily average) than Germany, the top solar market in the world.”

Back in 2009, the U.S. Department of Energy selected Minneapolis-St. Paul as one of its 25 Solar America Cities. The Twin Cities were chosen based on a competitive submittal that outlined plans “to build a sustainable solar infrastructure, streamline city-level regulations, and promote the adoption of mainstream solar technology among residents and businesses.”

Among the completed initiatives is the installation of the largest solar array in the Upper Midwest: a 600 kW, 2,613-panel system on the roof of the Minneapolis Convention Center. The array produces 750,000 kWh of renewable electricity per year — which could power 85 homes — and offsets 539 metric tons of carbon dioxide emissions annually.

On a smaller, yet no less influential scale, are the solar undertakings of homeowners, nonprofits and small entrepreneurial businesses. Eight of them are featured during the Minnesota Renewable Energy Society’s EcoMetro Sustainable Living Tour on Saturday (May 31). Four of the projects are located in the Twin Cities, including the EcoDEEP Haus, previously published in The Line.

Here’s a sneak peek at the Boyce-Olson Home, the Tiny Diner and the Habitat for Humanity Net Zero Home, along with the pioneers who made these projects and the sustainable lifestyle possible.

When David Boyce and his family bought their 1920s-era home on the southern edge of downtown St. Paul in 1989, they already had a plan.

“My wife and I are environmentally conscious,” Boyce says. “We wanted to get ourselves off of coal-based power as much as we could.”

They immediately had insulation blown into the walls. They also had the windows’ weight-and-pulley system removed, the window cavities insulated and the old windows re-hung.

In 1998 they installed their first 1.35 kW solar electric system with battery backup, “so other people knew it could be done,” Boyce says. They opted for a system with battery backup to ensure electricity in case of a power outage. They also purchased a Sun Frost refrigerator, “which at the time was much more efficient than anything else on the market, even though it was expensive,” Boyce explains. “Now, with the Energy Star program, mainstream appliances are much more energy efficient.”

In 2010, the family moved the panels from the old system onto the chicken coop in the backyard and installed a new 2.4 kW grid-tied solar system fromPowerfully Green on the roof of the house. “We enjoyed a perfect storm of rebates that year, from the State of Minnesota, Xcel Energy and federal tax credits — which helped a lot,” Boyce says.

At the same time, technological advancements in solar arrays meant “we were able to get almost twice the wattage out of the same square area of panels,” he adds. The house also has passive-solar tube daylighting in the bathroom, dual-flush toilets, 75-percent-efficient wood burning fireplace, super-efficient Swedish dishwasher and solar food dryer. Chickens provide eggs for breakfast, and pest control in the gardens.

“People often ask us: ‘What does it mean to put solar on your house?’ We tell them, it only generates electricity. We haven’t stopped using electricity, but we’re conservative with it,” Boyce says.

Solar can come with a hefty upfront costs, he adds, “but when I show people the really low electric bills they’re intrigued. A couple of families in the neighborhood have gotten solar after looking at our house.”

The Tiny Diner: A place to hang out, dine and learn

When Kim Bartmann — the Minneapolis restaurateur with such establishments as Bryant Lake Bowl, Red Stag and Pat’s Tap in her portfolio — envisioned The Tiny Diner, she didn’t want just another restaurant with local food. She wanted to put sustainability at the forefront of the entire operation, with a “whole system picture” says Koby Jeschkeit-Hagen, the Tiny Diner’s farm manager and community outreach coordinator. 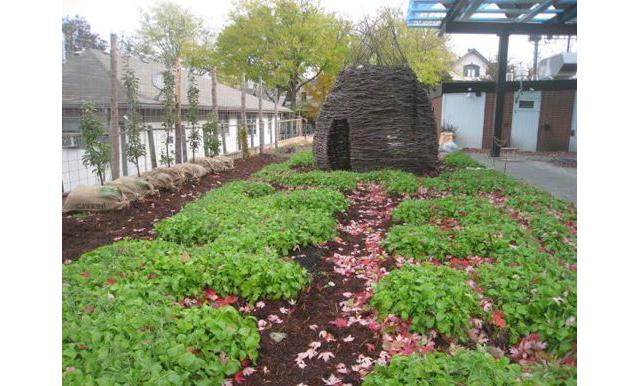 Courtesy of EcoMetro Tour
The garden and thicket at Tiny Diner

The Tiny Diner showcases permaculture design, “a set of principles that address the quadruple bottom line: care for the earth, care for people, sustaining the business and sharing the surplus,” Jeschkeit-Hagen explains. “It’s a strong value system that’s not about each separate element, but the relationships created among them. In that way the whole is greater than the sum of its parts.”

That approach included solar power: The largest single PV array ever lifted in one piece as a roof for the Tiny Diner’s outdoor patio. Provided by Sundial Solar, the custom system includes a 16 kW photovoltaic array consisting of 84 tenKsolar panels and reflectors.

Also on site are multiple gardens. A mini-orchard, rain garden and bee hives are being installed this summer, which is when the Tiny Diner will open. All of these working agricultural systems are demonstration projects, created in partnership with the Permaculture Research Institute Cold Climate and Master Water Stewards of the Freshwater Society and the Minnehaha Creek Watershed District.

The Tiny Diner, then, isn’t just a restaurant, says Jeschkeit-Hagen. “We’re a site that showcases permaculture techniques for educational purposes.” Those techniques also include diversity, not only with plantings but by “partnering with as many neighborhood initiatives as possible so the Tiny Diner is a place people can use.”

Everything on site also has multiple purposes. “A tree should not only be aesthetically pleasing,” Jeschkeit-Hagen continues, “but should also be a good pollinator to provide habitat and food, and shade for people, and have an edible or medicinal use. Classrooms aren’t just for demonstrations, but are also growing spaces.”

The Tiny Diner is also about “obtaining yield,” she adds. “We want people to walk away knowing about what they’re eating, how they can get solar at their houses, and catch and use rainwater. Yield is knowledge and community building. The Tiny Diner will be a place for people to hang out, dine and learn.”

After working on the ICON Solar House as part of the University of Minnesota’s Solar Decathlon 2009, Lucas Alm and Dan Handeen decided they needed to bring those initiatives to a greater audience.

“We loved the ideas manifested in that project,” says Alm, adjunct professor and principal of ALM Design Studio, St. Paul. Handeen is a research fellow at the U’s Center for Sustainable Building Research.

“But we felt it was a hard example for people because of the costs,” Alm continues. “We wanted to take solar technology and make it applicable to a wider range of people. We wanted to bring it to the affordable housing market, and we like to partner up with nonprofits such as Project with Pride Living with real-world projects.”

So the two instructors collaborated with Habitat for Humanity on a new residence in the Hawthorne EcoVillage, developed by Habitat in North Minneapolis, by teaching a Net Zero design studio in the U’s College of Design. The students began by analyzing Habitat’s typical construction process. They then used Passive House Planning Package energy-modeling software, developed by the German Passive House Institute, to help balance expected energy use with plans for the building envelope, heating and cooling systems, and window type and placement.

“Solar electricity is expensive to make,” Alm says. “So to reduce that expense, our main task was to start by designing an extremely energy-efficient home.”

The house is super-insulated with 8 inches of foam — “four to six times what building requirements are,” Alm says. Because the site has a north/south orientation, which poses a challenge to solar design, and is shaded by homes to the east and west, the students increased the house’s height to maximize the potential for solar gain on the roof.

Volunteers from one of the solar providers, 45 North Solar (tenKsolar was another provider), and Century College students who designed the solar array, installed the roof’s 5.7 kW solar photovoltaic system and three solar hot water panels that provide 65 percent of the home’s hot water and some space heating. Triple-pane windows were mounted on the outside of the 16-inch thick walls to ensure solar gain. All appliances are Energy Star certified. The house also has super-efficient heating/cooling, lighting and water systems.

Alm says the Net Zero Home is “one of the most energy-efficient homes in our region. The fact that it was affordably built for a family also really sets it apart.” The house also provided student solar and residential designers with an opportunity to add a real-world project to their portfolios. “The educational component was pretty remarkable.”