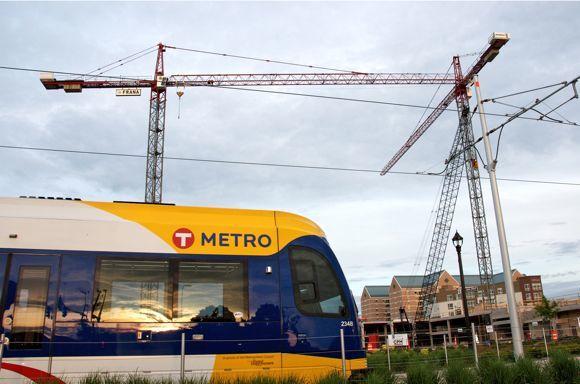 The cranes and construction sites currently lining the Central Corridor, where Metro Transit’s light-rail Green Line opens on Saturday, are ushering in a new chapter in University Avenue’s dynamic history. More than providing a convenient, environmentally friendly transit option, the $957 million light-rail project is proving a catalyst for rejuvenating the once vibrant, 11-mile spine connecting the Twin Cities.

Planners and legislators have been focused on development beyond the rails as much as the Green Line itself. What’s emerged is a blueprint for a denser, thriving center of commercial, economic and cultural activity organized around light-rail transit stations. This vision, as described in the Central Corridor Development Strategy, states that:

“The Central Corridor will build on its assets to become a place that has stronger businesses, more vibrant neighborhoods, and more beautiful urban places. Along University Avenue and in the downtowns, the corridor will invite residents, shoppers, employees and visitors to linger on safe, pedestrian-friendly, attractive tree-lined boulevards; establish a home and sense of community in stable and diverse neighborhoods; and work and invest in an area that provides a range of employment and economic opportunities.”

The degree to which that vision will be realized remains to be seen. But development is under way. And planners are manifesting clear ideas of how they hope to achieve the revitalization of the Twin Cities’ storied corridor with transit — and the communities building themselves up in its wake.

Industrial past to a transit-oriented future

The vacant lots currently dotting University Avenue are relics of the Central Corridor’s past lives. It’s no longer the bustling manufacturing and industrial hub it was during the early and middle part of the last century, when the streetcar system pulsed life through the main vein between the Twin Cities.

Companies like Brown and Bigelow Co., and Montgomery Ward once complemented large-scale industrial operations like the Snelling Bus Barns and the Minnesota Transfer Railway Yards. Together these businesses offered a steady stream of employment and economic activity to support a booming region between the cities’ two downtowns. 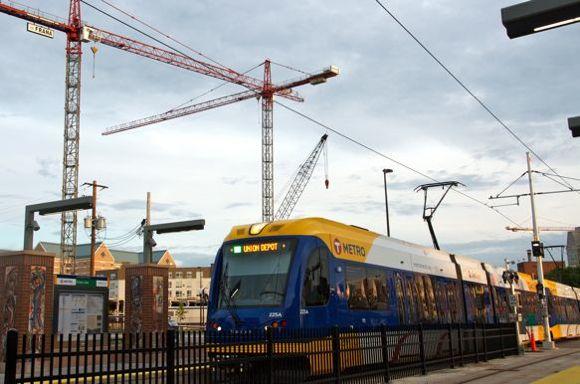 Photo by Kyle Mianulli
Construction along the Green Line

By pushing transit-oriented development along the Central Corridor, planners are envisioning a new life for the area: A place where residents live and play close to where they work, enjoy ample and bright public spaces, and most of all, rely on public transit to get around.

Planners have drawn inspiration from areas like the Pearl District in Portland, Oregon, and in San Francisco where major transit investments and intentional transit-oriented development have gone hand-in-hand.

“The experience across the country is that creating successful transit-oriented development takes not just transit, but the real commitment to create successful places,” says Adam Harrington, director of Service Development at the Metropolitan Council. “With the Green Line, we are really living that out.”

Planners have not been bashful about encouraging this type of development. A new zoning code in St. Paul — TN4 — allows for greater height and density, as well as eliminating minimum parking requirements in certain areas around light-rail stations.

Most of the more than $80 million in public funding dedicated to development along the Green Line appears to be going to transit-friendly projects like the Project for Pride in Living’s Hamline Station complex. The new complex consists of two 4-story buildings with 108 affordable housing units on top and retail on the bottom, as well as an outdoor public plaza fronting the station. 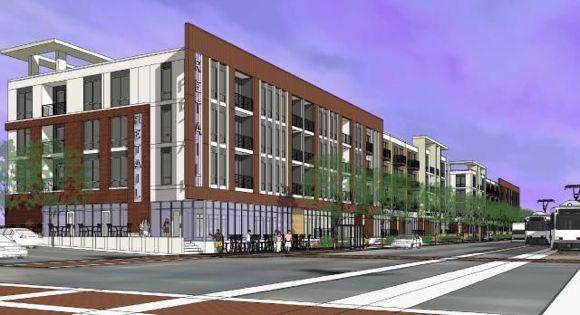 That’s just one of 121 projects within a half-mile of the corridor totaling $2.5 billion that the Met Council recently attributed to the Green Line’s construction. Those numbers indicate a development surge that could be outpacing initial projections. Community plans up and down the corridor call for 70,000 new housing units and $7 billion in development over the next 30 years, according to Jonathan Sage-Martinson, director of the Central Corridor Funders Collaborative.

“That initial investment seems to me a leading indicator that we’re going to see even greater density, and even greater housing production in the post operation period,” Sage-Martinson said.

The numbers may not be quite as promising as they first seem, though. Most of the 121 projects are clustered around the downtown areas, where new development would be expected with or without the Green Line, according to John Adams, Regents Professor of Geography at the University of Minnesota.

Those initial investments need to be looked at in a broader context, he says. Generally speaking, when new developments circle around shiny new public transit systems, he explains, they can either represent development that is relocating from somewhere else; development that would have happened regardless of light rail, just maybe in a different location; or genuine new investment. The overall impact on the regional economy depends heavily on those nuances, Adams says.

The Twin Cities metro area is expected to see an increase of almost 1 million people in the next 30 years, according to projections from the Met Council. Whether the thrust of the population increase will be focused around the urban core or surrounding suburbs is difficult to project. But national population trends, which show people moving into urban centers, suggest at least some of that growth will be in the cities—a good sign for the development prospects along the corridor.

Individual communities are also being proactive about planning for development spurred by light rail. 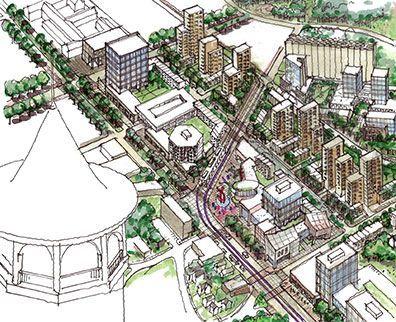 Prospect Park 2020 is a neighborhood-based nonprofit that isn’t leaving redevelopment of the area north of University Avenue in the Prospect Park neighborhood to chance. With funding from the Central Corridor Funders Collaborative, the nonprofit hired Target’s former construction director to lead the charge in planning for the area’s future.

The 2020 plan lays out a vision for 2,500 new housing units and 1 million square feet of office space, retail and other amenities — all within a transit-oriented framework that emphasizes live-work arrangements. “It is imperative to have in place a comprehensive development framework to attract the talent, inspiration and investment capacity necessary to shape the community we envision,” says the 2020 report.

The nonprofit is “really trying to figure out how to do live-work spaces” around its light-rail station,” says Harrington. That kind of transit-oriented employment not in a downtown is new. It’s something that we haven’t seen a lot of in this region.”

Construction on Surly Brewing Company’s new destination brewery complex, under way in Prospect Park near University Avenue, could help anchor future development, according to Dick Gilyard, who sits on the project’s management team.

Similarly, residents of the Hamline Midway neighborhood are forming aCommunity Investment Cooperative focused on bringing new businesses and investment to the section of Snelling Avenue north of University Avenue, where the development ball has been slow to get rolling.

“I can really imagine a Midway that once again is a real live-work community, that there would be such a growth in businesses and jobs that a lot of people who live here could also work here,” says Russ Stark, Ward 4 St. Paul City council member, who also lives in the Hamline Midway neighborhood.

A series of thriving communities, each with unique identities and offerings, is essential to creating a successful place that benefits both the Central Corridor and the metro area at large, says Libby Starling, research manager for the Met Council.

“Rather than being a transition between a downtown Minneapolis and downtown St. Paul, I think we will see the Green Line becoming the core spine of the larger region,” she says. “It will be the connecting impulse and a series of destinations in its own right.”

Meanwhile, distinct communities have been building momentum along University Avenue. Many are boldly announcing themselves as vibrant new destinations calling visitors and investment back to the Corridor when they debut during the Green Line Launch Celebrations Saturday. “Many of [the celebrations] are taking place in and really celebrating those cultural nodes and highlighting that unique flavor,” says Sage-Martinson.

In addition to events at the line’s end points — Union Depot at the East terminus and Target Field Station at the West end — seven other community celebrations will take place at stations located at important cultural and economic nodes in between:

“There are a lot of unique, vibrant places and spaces and communities tied together by this transit investment,” Starling says. The vision for rejuvenation along the corridor, she adds, hinges on strengthening and amplifying the unique offerings and identities of the line’s communities.

Threat of displacement a serious concern

“One of the biggest fears about the corridor,” Stark warns, “is that there will be a Starbucks on every corner — a fear of it becoming this generic anyplace.” To avoid gentrification, planners are carefully monitoring the corridor to prevent the displacement of diverse and vibrant cultures already there.

Of the 2,180 new housing units constructed in the last four years, about 7 percent are classified as “affordable,” according to numbers gathered by the Big Picture Project, which Stark chairs. The Big Picture Project, a program of the Central Corridor Funders Collaborative, tracks population movement and affordable housing options along the Green Line.

New affordable housing projects are under way along the corridor near almost every station.

“It’s not that one or two projects at every station would prevent everyone from displacement, but it gives you a pretty good sense that affordability is being invested in and is being seeded pretty consistently across the corridor,” Sage-Martinson said.

Still, while rents across Minneapolis and St. Paul in general have gone up by 17 percent, rents along the Central Corridor have risen by 24 percent. Some of that jump might be attributable to large new housing structures near the downtowns and new student housing around the University of Minnesota.

At this early stage, however, widespread displacement doesn’t appear to be taking place. Over the last four years, the number of low-income households along the corridor has remained relatively stable, but new investment can be notoriously slow to come to low-income areas. That’s not necessarily a bad thing, according to Stark.

“The pro is more opportunities for independent businesses to grow and succeed,” Stark says. “In some ways, having development go more slowly and be done more thoughtfully can be beneficial.”

For now, all eyes are on Saturday, when Green Line passenger service begins. Much of the Central Corridor’s future has yet to be determined. What happens in the next several years will likely set the course for communities along the Green Line more than any amount of planning and vision could.

Whatever happens, it seems clear the stretch of land connecting the Twin Cities is about to change in a big way, and the next chapter of the Central Corridor has already begun.

This article is reprinted in partnership with The Line, an online chronicle of Twin Cities creativity in entrepreneurship, culture, retail, placemaking, the arts, and other elements of the new creative economy. Kyle Mianulli is The Line’s development news editor.

Beyond the rails: mapping the development, cultural and community impact of the new Green Line