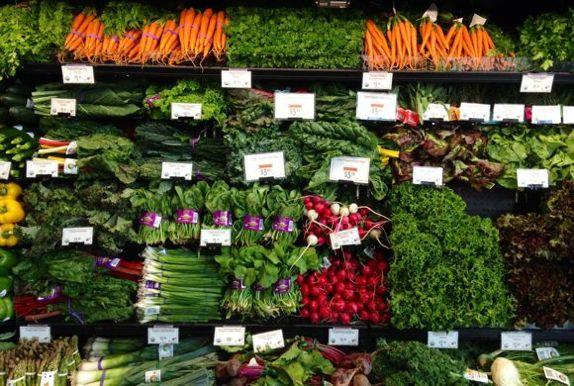 Is that local kale you’re enjoying really local? How can you tell, short of grilling your chef or co-op buyer?

For all the talk about locally grown food and local food systems, a consensus on the meaning of “local” remains elusive. In 2008, Congress passed a bill with two complementary definitions: Local produce could either be produced in the state where it’s consumed or transported no more than 400 miles from source to consumer. In our neck of the woods, that second definition includes factory-farmed corn from Iowa, wheat from the Dakotas and dairy from Wisconsin — hardly revolutionary stuff.

Still, the region around the Twin Cities is emerging as a hotbed of innovative agricultural activity, producing world-class, sustainable beef (Thousand Hills Cattle in Cannon Falls) and locally grown hops (Mighty Axe Hops in Ham Lake). Even closer to home, an ambitious group of producers and retailers aims to redefine what it means to be local, and give regular consumers more control over what they eat and drink.

The growers among us

California Street Farm farms sizable plots in the Bottineau neighborhood of Northeast Minneapolis and sells produce at a weekly farmstand (5-7 p.m. on summer Wednesdays). Stone's Throw Urban Farm, which cultivates vacant lots in Midtown Minneapolis and Frogtown in St. Paul, sells at local farmers’ markets and to restaurants and co-ops.

Urban Organics uses cutting-edge aquaponics to sustainably grow vegetables and fish in the old Hamm’s Brewery on St. Paul’s East Side, and leverages partnerships with Byerly’s and Lunds to offload what it produces. Next year, Frogtown Farm will open a 5.5 acre plot near the intersection of Minnehaha Avenue and Victoria Street in St. Paul, immediately becoming the Twin Cities’ largest contiguous urban farm to date.

All take (or will take) different approaches to the business of growing and selling produce in an urban environment. But they also have something in common: “We’re trying to grow as much as possible in the city,” says Alex Liebman, a Stone’s Throw’s co-founder.

If you eat at local restaurants, or shop at local co-ops and high-end grocers, you’ve probably purchased hyper-local produce already. On top of its regular spot at the Mill City Farmer’s Market, Stone’s Throw has amassed a growing list of local restaurant and retail clients — from St. Paul’s Ngon Bistro and the St. Paul Cheese Shop to Minneapolis’s Modern Times Cafe, Corner Table Restaurant and the Bachelor Farmer (which also grows herbs and salad greens on its rooftop garden).

Co-ops in the Twin Cities, including the East Side Food Co-op in the Holland neighborhood of Northeast, source seasonal veggies from urban growers too.

From the growers’ perspective, such activity is a tentative first step toward mending a national food system that’s “broken,” as Urban Organics co-founder Fred Haberman says bluntly. Today, virtually no connection exists between the average person and their food, he notes. Most fresh vegetables make their way to the Twin Cities from drought-prone areas of the Southwest.

“We’ve taken Mother Nature’s perfect arrangement,” he says, “and replaced it with a massive industrial system.”

“It’s delusional to keep importing vegetables from Arizona and California,” adds Liebman. “Minnesota doesn’t need to be a net importer of food.”

Growing an appetite for local

For chefs, using locally grown food is about quality and menu control. At Seward’s Birchwood Cafe, chef Jay Botten occasionally sources leafy veggies from Stone’s Throw. But he also works with neighborhood homeowners with amateur gardens, sourcing rhubarb and herbs. At certain times of year, he counts on foragers to supply elusive treats like fiddleheads, ramps, morels and hen-of-the-woods mushrooms. To accommodate the changing bounty, he changes the menu eight times annually.

In Southwest Minneapolis, Corner Table Restaurant goes out of its way to support small producers, including Stone’s Throw. “It comes down to that personal relationship,” says chef Thomas Boemer.

Before the growing season begins, he talks to Stone’s Throw employees about what he’d like to include on upcoming menus. During the season, he buys by the pound, as he would from any supplier. He tries to choose veggies that are both healthy and easy to grow in Minnesota, even if they’re more novel. As diners get more familiar with nutritious veggies that grow well in the city, like collard greens, Boemer figures they’ll seek them out at the co-op or grocery store.

At Linden Hills’ Tilia, chef Paul Backer loves that his hyper-local suppliers are maniacal about quality control. He’s a big Stone’s Throw client. The quality is always so good — “When I first saw what they had, it was like I was looking at a botany textbook,” says Backer — that he often works his menus around their harvests.

The arugula and salad greens, in particular, are “just gorgeous-looking.” During the growing season, when Tilia’s house salad is “at its best,” the salad is made up of Stone’s Throw-sourced greens with a light vinaigrette dressing. He uses hyper-local components in more complex dishes too, like a recent brunch favorite — a pork sandwich with egg, Spanish peppers and a handful of Minneapolis-St. Paul arugula.

Tiny Diner, restaurateur Kim Bartmann’s new establishment in South Minneapolis, takes an even more ambitious approach. Though the restaurant just opened in June, Bartmann’s crew has farmed a small lot in the Longfellow neighborhood since last summer, hauling in about 2,000 pounds of produce in 2013.

According to its website, the farm produces (or will produce) conventional Minnesotan items like apples, pears and rhubarb, as well as exotic strains of heirloom tomatoes and rattlesnake beans, an annual legume. Depending on the season, this produce works its way onto Tiny Diner’s ever-changing menu, creating a completely self-contained farm-to-table system. (The restaurant’s weekly farmer’s market also welcomes other urban gardens and farms, like Growing Lots.)

Thanks to a close relationship with the Permaculture Research Institute - Cold Climate, Tiny Diner’s system is designed to be more than sustainable; it’s self-sustaining. At the farm, initiatives like beehives, hedges that attract native pollinators and a rain catchment system reduce the strain on the local ecosystem. At the restaurant itself, a massive solar array mitigates Tiny Diner’s carbon footprint. Bartmann and her staff are committed to sharing their insight with others, offering regular workshops and classes, like a recent course on the basics of mushroom farming.

Creating sustainable, hyper-local food systems isn’t worry-free. Lucia’s, a South Minneapolis institution, still sources as much local produce as possible. But food buyer Lori Valenziano says their go-to source for hyper-local produce, Cornerstone Rooftop Farms (a project of the Cornerstone Realty Group), has been incommunicado this season, with no explanation why.

Stone’s Throw faces some difficult, but not insurmountable, challenges. “We’re in a three-way tug of war,” with balancing soil preparation and care, supporting the health and well-being of people in urban communities and ensuring financial sustainability (and profitability), Liebman explains.

Time and inventory management are both critical: “Are we using our time to give tours of our farm or get a cover crop planted before it rains? Are we selling tomatoes at a comfortable margin or just above cost? These are questions we ask,” Liebman adds.

Land is an issue too. Stone’s Throw operates legally, and City Council members in both Minneapolis and St. Paul are receptive to the concept of outdoor urban farming. But competing with other land uses, especially given the recent pace of development in both cities, is challenging.

And, of course, there’s climate. Liebman is almost evangelical about the potential of hoop houses; enclosed, passively heated structures that can extend the growing season from early April through early December. Liebman cites Growing Power, a Milwaukee-based urban farming outfit with nearly 30 hoop houses, as an example of the scale he’d like to see.

Stone’s Throw is also working on a greenhouse for mid-winter starts, hopefully leveraging compost heat (instead of natural gas) as its primary heat source. “Restaurants are just part of what we want to do,” says Liebman. “We want to have fresh, locally grown arugula, in bulk” at Cub Foods and other major grocers.

With a year-round, indoor growing season, Urban Organics doesn’t have to contend with early frosts and wintertime supply gaps. Still, Haberman openly admits that his company’s business model “has yet to be proven.”

Given the hefty federal farm subsidies that mostly benefit major ag corporations, Urban Organics’ approach could easily be cost-competitive with traditional agriculture if a reduction in said subsidies, or the creation of new subsidies for non-traditional agriculture, leveled the playing field. With trillions of dollars directly and indirectly (via the healthcare and logistics industries) invested in the American food system, nothing less than the future of the national economy is at stake.

The environmental benefits of decentralized, sustainable agriculture are enormous as well. Take a small example: Because Urban Organics is a closed-loop system, says Haberman, aquaculture uses just two percent of the water required for traditional agriculture.

Assuming Haberman and his co-founders—and other ag entrepreneurs—can prove its commercial viability, aquaculture could dramatically improve the sustainability of production in drought-prone agricultural areas in Arizona and California’s Central Valley. After all, most of the water used in irrigation is wasted, especially in the desert. “You’re throwing water into the air on hot, sunny days,” says Haberman.

He envisions a hybrid system with “250,000- to 500,000-square-foot aquaculture” facilities next to open-air fields that utilize more efficient, ground-based irrigation systems. The setup could be aided by a “smart watering” system, backed by robotic irrigators that only deliver water when and where it’s needed. Within a generation or two, he reasons, aquaponics alone could produce 20 to 30 percent of the country’s fresh produce.

But that assumes we’re willing to tackle the challenge. “Right now we’re innovating on the wrong side of our food system,” he says. “Rather than creating artificial food products that cause obesity and other health problems,” he adds. “We need to work on advances that encourage sustainable production.” Signs indicate such production is happening on a large scale: According to A Greater Minnesota, the state is the country’s 7th-largest exporter of food products and has the 5th-highest organic acreage, with more than 720 participating farms.

But the goal of realizing, and enjoying, plentiful, sustainable, local food on a daily basis is far from won.

This article is reprinted in partnership with The Line, an online chronicle of Twin Cities creativity in entrepreneurship, culture, retail, placemaking, the arts, and other elements of the new creative economy. Brian Martucci is The Line’s innovation and jobs editor.