Stephanie Weir’s cycling career didn’t begin with her current job as organizer for St. Paul Women on Bikes, a St. Paul Smart Trips program. She rode recreationally, on occasion, throughout her childhood in rural western Michigan and during her college years. Now a 10-year resident of the Twin Cities, Weir rides to Hamline University, where she’s completing her master’s degree in nonprofit management. She also rides daily to Smart Trips’ downtown St. Paul office, where she works to get more Twin Cities women on bikes for commuting and recreation.

She also wants to turn women into cycling advocates. “There’s an urgent need for more women to get involved in the conversation about biking in the Twin Cities,” she says.

Kat McCarthy, a Grease Rag board member and Calhoun Cycle inventory manager, rides daily and year-round, as well. McCarthy’s bike is her primary mode of travel, regardless of the weather. The Wisconsin native began cycling out of necessity. “I needed a way to get around,” she says, and she didn’t own (or want to own) a car.

She uses her bike for everything, even moonlighting as a delivery person for BeezKneez when she’s not at her day job or Grease Rag events. “Pulling huge trailers loaded with honey is a workout,” she says with a laugh.

Thanks to their bike-focused jobs and extracurricular advocacy, Weir and McCarthy have morphed from bicycling enthusiasts into formidable authorities with expert-level cycling skills and knowledge.

Of course Weir and McCarthy aren’t the only Minneapolis-St. Paul women who feel comfortable on bikes. A national leader in biking participation for health and commuting overall, the region’s female cycling rates are also above average. According to the Biking Walking Alliance’s 2014 Benchmarking Report, 35 percent of Minneapolis bike commuters are women. Nationally, female riders account for just 25 percent of all bike trips.

Still, organizations like Women on Bikes and Grease Rag — not to mention rank-and-file cyclists — are asking why our biking scene isn’t even more equitable. Linda Baker, writing in Scientific American, notes that 49 percent of German cycling trips are taken by women. In the Netherlands, women account for 55 percent of trips.

Weir points to deep-rooted social and cultural issues that impede gender equality in areas other than cycling. First, there is “persistent social pressure [for women] to look nice,” she says, especially at work. Whereas men can comb their hair, change their shirts and walk past their boss without feeling self-conscious, women are expected to put in more effort.

Maria Ambrose, a St. Paul resident and architect who commutes by bike when possible to ESG Architects in Minneapolis, including in winter, says this expectation can sometimes be self-imposed. “It’s actually seen as a badge of honor to bike to work” at her firm, she says, “but the awkwardness of seeing clients after biking a long way” can be problematic. 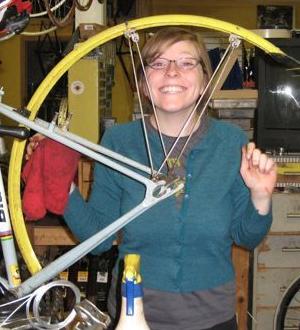 Professional women like Ambrose may also travel for work, driving around town or other cities in the region to meet clients. For longer trips, biking becomes impractical. Even for in-town meetings, lugging sensitive renderings and electronic equipment is difficult by bike.

Lack of appropriate changing and storage facilities is a problem at many offices, too. Ambrose’s progressive office has showers and changing rooms, but no lockers for storing bike clothes and gear. “When we bike to work, we have to shove everything under our desks,” she says.

Another issue: Both Weir and McCarthy observe that mothers and female heads of household, even those with full-time jobs, tend to shoulder more household and family tasks than males: ferrying kids around town, running errands, keeping up with social obligations. Normal bikes aren’t built for a child passenger, they note, and even the sturdiest trailers seem risky for some mothers.

“It’s hard to bring your kid along for the ride when you don’t feel safe,” says Weir. Adds McCarthy: “We need to make commuting and multi-stop trips make sense for these women.”

A friend of McCarthy’s, for instance, has said she doesn’t feel safe riding with her daughter in tow unless they’re in a dedicated bikeway or separated bike lane. Thankfully, these are becoming more common in the Twin Cities. When completed, the new Northside Greenway, for example, will have a wide raised barrier between bike and vehicle traffic.

And cycling, writ large, suffers from access issues. “No matter what gender or group you identify with,” says McCarthy, “biking can be exclusive.” She’s right: The gender gap is just one symptom of broader barriers to accessibility, like the high cost of proper equipment and the cliquey nature of some cycling subcultures.

Minneapolis-St. Paul does have key building blocks for a truly equitable cycling scene. One such block is a proliferation of safe spaces for female and female-identified riders, like Grease Rag’s open shop nights, which provide hands-on repair education for cycling novices. The events have helped McCarthy become a better, more educated cyclist and bike owner, she says, and a better advocate for other WTF cyclists who want to get more involved.

“Before [open shop nights], I knew very little about fixing and modifying bikes,” says McCarthy. Now she can fix just about any bike issue and imparts her skills to less experienced riders at some Grease Rag shop nights. This month, she played an integral role in Grease Rag’s sixth annual Winter Skill Share, a gathering for WTF cyclists to learn winter biking techniques, safety tips and common repairs.

Winter Skill Share also includes a popular gear swap, where riders exchange unused clothing and equipment with others who need it. The swap is a key element of Grease Rag’s commitment to accessibility for WTF riders. Swapped items typically include studded tires, goggles and pogies, all of which can be expensive at retail.

“The gear swap helps break down the cost barrier,” says McCarthy, “and helps WTF riders realize that riding in the winter is a doable thing that doesn’t have to be prohibitively expensive.”

In St. Paul, Frogtown-based Cycles for Change runs popular women and trans open shop nights, which are independent from Grease Rag but take a similar approach. According to Cycles for Change, fem- and trans-focused shop nights create a safe space for “people who may feel uncomfortable entering such a strongly masculine charged space to participate in a male dominated activity” — like repairing bikes.

Weir’s Women on Bikes focuses on empowering female and female-identified riders, as well. The organization distributes educational material aimed at “demystifying the bicycle” and teaching basic maintenance to first-timers. Women on Bikes also organizes workshops to empower female commuters, mothers riding with children and immigrant women who lacked access to bikes in their home countries.

For WTF riders interested in taking the skills they learn at Grease Rag, Women on Bikes or Cycles for Change on the road (or racing track), Koochella offers a supportive environment for serious female racers. The locally based, all-female racing team “has really done a lot to raise the profile of women in bike racing,” says McCarthy. Koochella visits velodromes, road races and off-road tracks around the Midwest.

Janis LaDouceur, a Minneapolis architect and longtime competitive cyclist, is a big supporter of Crank Sisters. But she acknowledges that more needs to be done to make racing accessible to more women. “Having competitive cycling in middle and high school is the answer,” she says. “Make it normal as early as possible,” before social pressures and traditional gender norms kick in.

For more casual female and female-identified riders, the annual Babes in Bikeland race — a September tradition that drew 300 participants this year — takes WTF riders on an hours-long “scavenger hunt” through Minneapolis. “Babes in Bikeland is an example of a powerful, fem-centric community built around biking,” says McCarthy, event organizer for Babes in Bikeland since 2011.

Charles Avenue was the first planning process that didn’t leave her disappointed, Weir says. If anything, women and female heads of household were over-represented at community meetings and gatherings around the project, thanks in part to the support of the community-based Friendly Streets Initiative.

“I thought, ‘I want every city project to unfold like this,’” she recalls.

The positive Charles Avenue experience led Weir to organize Women on Bikes’ innovative, successful SpokesWomen program. The volunteer ambassadors “normalize and demystify” cycling for other women, says Weir, while advocating for bike-friendly policies at the district and city levels. SpokesWomen reach out to district council members, advocating for initiatives like improved lighting, maintenance and supervision on year-round trails and bikeways, since women are more likely to be victimized on disused trails.

Women on Bikes and its SpokesWomen have made headway in the policy arena. St. Paul’s City Council is considering an ambitious “loop and spur” bikeway system around downtown St. Paul. Buy-in from local government leaders, says Weir, has helped win the support of local businesses that recognize the importance of drawing riders in an increasingly bike-centric urban environment.

“Our business partners actually requested bikeway access,” says Weir. “They’ve been more leery in the past, so that’s a big step forward.”

Bike-focused businesses are buying in, too. According to McCarthy, locally based Quality Bicycle Products is offering a unique, female-only scholarship to Oregon’s United Bicycle Institute, which offers coveted but expensive bike mechanic certifications — and whose student body skews heavily male. The goal is to increase gender diversity in Twin Cities’ bike shops, boosting comfort among female and female-identified riders.

With momentum on multiple fronts, Weir, McCarthy and their fellow female cycling advocates are optimistic. But future cycling participation gains and favorable policy changes depend on active, engaged female bikers of all stripes (from those who occasionally ride on summer weekends to hardcore winter cyclists) getting on bikes more often and creating a healthier, safer and more opportunity-rich Twin Cities.

“Across the cities, more people need to get out of their houses and cars and get out on the street,” says Weir. Regardless of gender identification, she says, “Biking isn’t just about recreation. It’s about health, jobs and economic vitality.”

This article is reprinted in partnership with The Line, an online chronicle of Twin Cities creativity in entrepreneurship, culture, retail, placemaking, the arts, and other elements of the new creative economy. Brian Martucci is The Line’s innovation and jobs editor.

Initiatives in the Twin Cities are getting more women on bicycles