When we first planned this roundup of exciting architectural and development additions to Minneapolis and St. Paul, we confronted the gargantuan elephant in the room: the new Vikings Stadium. While yours truly has gone on record admiring the formal design of the building, far too many questions linger about other critical aspects of the project.

Will the perimeter of the building and landscaping around it really add vitality to the neighborhood as promised — or will it just be Metrodome 2.0? Will fans need to scramble over piles of dead birds to get inside due to the building’s sheer glass walls? Will the promised new park, the “Yard,” really be a boon to Downtown East, or will it simply be a windswept placeholder for Vikings tailgating events?

Rather than go on with more verbal hand-wringing about “The People’s Stadium,” let’s turn our attention to 10 projects we are excited about and that promise to transform neighborhoods, enrich our quality of life and add to the roster of “must see” attractions for out-of-town guests.

If Helen of Troy was the “face that launched a thousand ships,” then Surly was the microbrew that launched a thousand brewpubs — at least in Minnesota. Two years after Gov. Mark Dayton signed the so-called “Surly Bill” into law, which allowed breweries to sell the product they make where they make it, the Brooklyn Center-based beer-meisters broke ground on their dream building in an industrial corner of Southeast Minneapolis by the University of Minnesota campus. 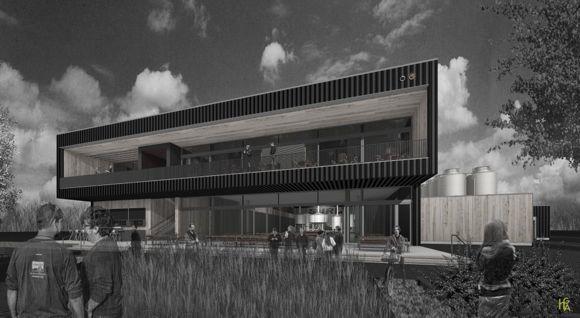 Wrapped in dark corrugated metal, the brewery looks as moody (or menacing?) as the names and labels on Surly’s cans.

HGA Architects and Engineers designed the new $20 million structure. Wrapped in dark corrugated metal, the brewery looks as moody (or menacing?) as the names and labels on Surly’s cans: the Belgian style “CynicAle,” the amber-colored “Furious” and the German style lager “Surly Hell.” Billed as a “destination brewery,” Surly’s new home — which includes a full-service restaurant, amphitheater, tours and tasting room — is set to transform the industrial and urban landscape adjacent to Prospect Park, just as Surly upended expectations about the business of craft beer.

A landmark historic building anchoring the heart of Minneapolis’ east bank along the Mississippi River, the 1881 Pillsbury A Mill, vacant since 2003, has been the focus of multiple failed rescue attempts. Now, however, the mill’s adaptive reuse into affordable live-work artist housing — by the developer Dominium Co., with architects from BKV Group — provides a good reason for preservationists to celebrate. The complex will also include studios and performance spaces. 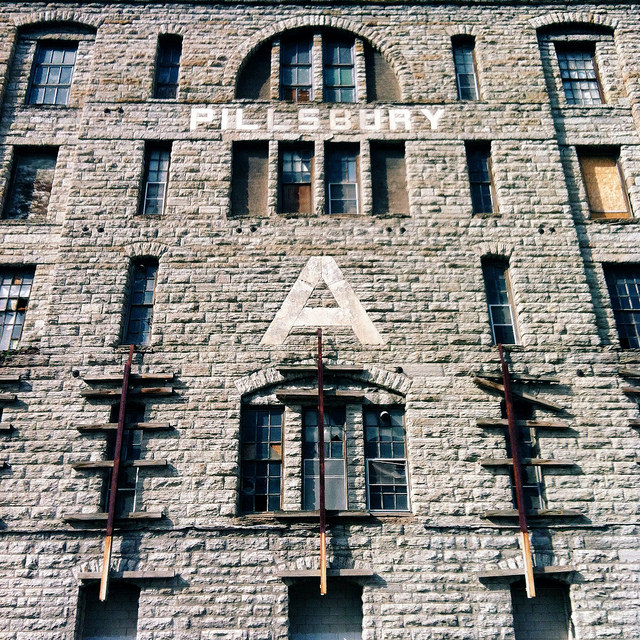 Plenty of market-rate housing has been added to historic Main Street in recent decades. Still, the city’s decision to use its economic development power to support historic rehab, while adding economic diversity to this up-and-coming neighborhood, is thrilling. The mill’s conversion not only ensures that the hulking beast, constructed of Platteville limestone, will survive for yet another century, but also that the city’s rich arts culture will continue to flourish.

Sitting at the corner of Washington Avenue North and 3rd Avenue in the North Loop, the empty Jackson Building has been one of the area’s biggest bummers — especially since scaffolding was put up to protect pedestrians from falling rubble almost two years ago. Built in 1897 as a warehouse, the brick behemoth may get new life at the hands of a Chicago-based developer/hotelier team and local firm ESG Architects (designers of the W Foshay and Westin Minneapolis Hotel renovations).

Prominently placed at the exit of I-394 into downtown, a rejuvenated Jackson Building (with planned first-floor restaurant) may finally give other developers cause to fill in more of the still-abundant surface parking lots. A hotel would provide another choice of accommodations for baseball enthusiasts visiting the Twins Stadium, and for guests visiting residents of the new and abundant apartment buildings nearby. Maybe it will even inspire the Déjà Vu owners across the street to up their game. Stay tuned.

Another winner by HGA is the new Concert Hall addition and lobby expansion for the Ordway Center for Music on Rice Park in St. Paul. The new 1,100-seat concert hall will have two tiers of balconies with side boxes and loft seating behind the orchestra, making it the first wrap-around-style performance auditorium of significant size in the Twin Cities.

The addition clearly emulates the design of the original Ordway. Yet HGA’s design also trends toward midcentury Finnish modernism with its Alvar Aalto-esque undulating wood-slatted ceiling and subtly curving white-plaster walls. The project follows fast on the heels of another HGA project, the award-winning renovation and re-opening of Northrop at the University of Minnesota. 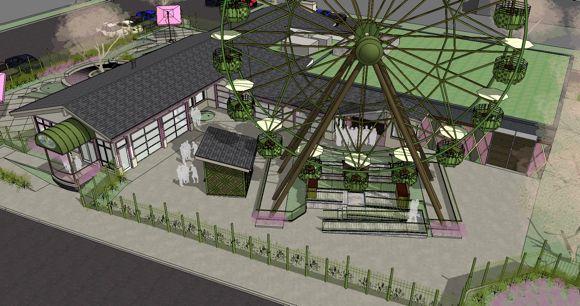 The Ferris wheel, shipped from Italy and painted retro lime green and pink, required special consideration by the City of Minneapolis’ Planning Commission. The wheel will — during the temperate months — gently circulate Country Club diners into the air where they can take in panoramic views of the downtown skyline and the nearby Lowry Bridge. According to the project’s website an opening is planned for early 2015.

When James Corner and his landscape design firm Field Operations, based in New York City, won the job of redesigning Nicollet Mall, the local design community expected nothing less transformative than New York’s High Line – the project that cemented Corner’s national reputation. If the renderings produced for the Mall are any indication, those expectations are not misplaced. Corner’s design recognizes that the mile-long stretch of Nicollet is actually a series of precincts, each deserving of its own landscape solution.

Densely planted “woods” bracket either end of the street, while an urbane, largely hard-scaped pedestrian “island” secures the thoroughfare’s center between 6th and 8th streets. But will the amphitheater stairs connecting the street to the IDS and City Center skyways compromise the architecture integrity of the current structures? And how is the City of Minneapolis going to come up with the funds to build what Corner has imagined? Fingers crossed.

Everyone who has walked, biked or rollerbladed across Minneapolis’ Stone Arch Bridge from the east bank of the river into the Mill District ends up in a no-man’s land of crumbled asphalt parking lots, weedy compacted turf and narrow paved trails. The recently announced Water Works Park promises to untangle the multimodal disaster at the end of the bridge, mostly through the extension of the Stone Arch Bridge trail up river and by realigning the existing roadway closer to the riverbank.

Across the street, a new park will add green space, expose historic ruins and set aside land for a café pavilion on the site of the former Fuji-Ya restaurant. The pavilion will bring public accommodations and access to a two-block stretch dominated by private development in recent years. Spearheaded by the Minneapolis Parks Foundation, Water Works Park will also allow residents and visitors to walk right up the water’s edge. How cool is that for a city on the largest river in North America!

Last November, the Hennepin County Board of Commissioners approve funding for a new 100,000-square-foot county-services office building at a 6.3-acre site at Lake and Hiawatha. In doing so, they locked in a vision for community-driven, transit-oriented development at site, which is the third-busiest transit intersection in the state.

The county’s five-story office building will anchor the corner on Lake Street. But the real excitement comes from the rest of the plan. Developed by BKV Group, the plan includes a four-season market plaza connected to the Hiawatha LRT station — a permanent home for the Midtown Farmers Market — retail space at ground level and 400-plus units of mixed-income housing.

Arguably the largest tract of land available for development along the Blue Line light-rail line, the project promises to make good on Minneapolis Mayor Betsy Hodges’ commitment to add population to the city rather than cars. The development will also create a commercial and civic center for the Corcoran Neighborhood — a historically blue-collar residential area whose residents currently need to drive to surrounding neighborhoods for basic goods and services.

The ball park includes a new pedestrian and bike connection to the nearby Bruce Vento Nature Preserve. The stadium also has open sightlines — a good thing for watching the game, and for letting some of that game day energy spill out into Lowertown, one of America’s top hipster ZIP codes with its Farmers Market, award-winning restaurants, coffee shops, food trucks and wine bars, and warehouse buildings converted to apartments and co-working spaces.

In 1999, when Hope Community Partners initiated its ambitious goal to completely rebuild the intersection of Franklin and Portland avenues just south of downtown Minneapolis, the organization’s intent was to spark redevelopment of a blighted corner of the Phillips Neighborhood. Fifteen years and three buildings later, Hope Community is finishing up the fourth and final phase of its South Quarter initiative with The Rose.

Both Hope Community and its development partner, Aeon, continually set their aspirations higher and higher throughout the process. The Rose will not only provide 90 affordable apartments on a former brownfield site; the project is the first affordable, multi-family development in the U.S. to implement the Living Building Challenge, an aggressive sustainable-design standard that calls for net zero energy and water consumption. In other words, whatever energy or resources the building uses will be created or harvested on site.

In addition to meeting those stratospheric environmental and social goals, The Rose has been designed by Minneapolis architecture firm MSR, which is delivering a handsome, innovative modern structure that outshines many recent luxury housing projects in Minneapolis.

The Minnesota State Legislature approved funding last spring to rebuild one of the crown jewels of Minneapolis’ park system, the Minneapolis Sculpture Garden adjacent to the Walker Art Center. A magnet for more than 8.5 million tourists and Twin Citizens since its opening in 1988, the garden has been literally loved to death. Today it’s tired, worn and, in parts, overgrown. Minneapolis landscape architecture firm Oslund and Associates is providing design work for the renovation and will present schematic designs in February 2015. The garden will close entirely for the construction, which will culminate in a planned ribbon cutting in Fall 2016.

This article is reprinted in partnership with The Line, an online chronicle of Twin Cities creativity in entrepreneurship, culture, retail, placemaking, the arts, and other elements of the new creative economy. Phillip Koski is a Minneapolis architect and architectural writer.

Correction: This version corrects Surly’s home base, which is Brooklyn Center.

10 development projects that will transform Minneapolis-St. Paul in 2015