In my neighborhood of South St. Anthony Park in St. Paul, we tend to treat our alley like a woonerf. That’s not an autocorrect you’re reading, but a Dutch word for a “living street” designed specifically so that slow-moving vehicles, bicyclists and pedestrians can peacefully co-exist. In our alley, neighbors will actually sit down and visit while playing with each other’s pets; bicyclists will congregate before heading off on a day ride; dog owners will walk their furry companions while sipping wine, coffee or beer.

When a car comes along, it must make room for us … although we do politely step to the side to let vehicles pass. In all of these aspects, our alley is an accidental woonerf, meaning it functions as a public realm for multiple uses — including for pedestrians. Still, alleys are designed principally to provide access for cars and service vehicles — in spite of our takeover attempts. Woonerfs, however, are catching on in cities across Europe, as well as in Seattle and in Minneapolis.

“There’s been an interest in woonerfs in the landscape architecture and the urban design communities for several years,” says Brady Halvorson, associate partner and head of landscape architecture at BKV Group in Minneapolis, “because they really function well for moving people, cars and bicyclists in a safe manner. Where roundabouts were in the engineering vocabulary 15 years ago, we’re now there with woonerfs.”

They work, Halvorson continues, “because woonerfs are first and foremost about designing an interesting place that treats the street as a public realm. The challenge is deciding how much of that space you give away to vehicles versus creating a space everyone can share. But anywhere you can push an idea like this, by creating public space useful for more than just cars, is good.”

Another example of an existing accidental woonerf is the service alley outside of Café Lurcat on Loring Park in Minneapolis. Here the entrance to The Third Bird, a dance studio, the back of Luna Lux letterpress studio, and doors to various art galleries open onto a brick-paved thoroughfare and courtyard that exudes an Old European ambience.

“It’s a service alley, but also a charming place for pedestrians to walk and gather,” says David Graham, principal of ESG Architects in Minneapolis. “While there’s controlled auto access, this is a space that people can and do share.” Years ago, ESG explored and included a woonerf-like concept — a pedestrian drop-off area — in its Excelsior & Grand project in the first-ring Minneapolis suburb of St. Louis Park, Graham says.

But in the U.S., where cars reign supreme, designers “need to clearly understand how woonerfs are used and implemented in the Netherlands. You can’t just import a woonerf and drop it in.” 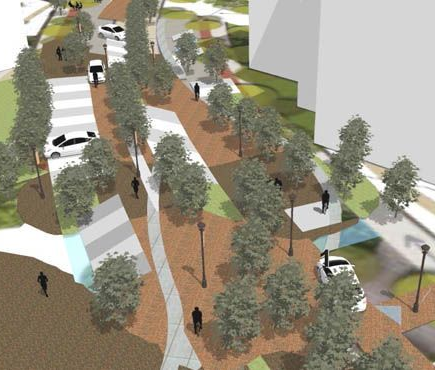 Many of these features exist in BKV Group’s woonerf for the Mill City Quarter, a apartment complex planned between 2nd Street, 3rd Avenue, 5th Avenue, and the River West high-rise and Mill Place building near the Mississippi River in Minneapolis. Currently, the site is a surface parking lot. Halvorson and his team are designing a woonerf along a historic rail corridor running through the middle of the site; the corridor also connects to the West River Parkway.

But because the rail-corridor parcel is owned by a third party, who required the design team to retain a number of parking spaces for daytime tenants in his office building, “our goal was to create something more than a parking lot,” Halvorson explains. “We also wanted to be able to close off the site for functions and gatherings, and we designed the space so people on bikes or on foot feel comfortable walking down the middle of it.”

While the number of cars parked in the space “is counter-intuitive to a true Dutch woonerf,” Halvorson explains, other woonerf-specific design elements are included. Reduced speeds for cars will be posted. The space will include “a vehicular circulation area with bollards, lights, plantings and pavers,” he says, and the area will have distinctive uniform paving, planted islands and festival lighting strung across the space from poles along the sides. “We’re calling it ‘woonerf-lite’,” he says.

Underneath the woonerf, he adds, is a “large gallery of storm-water pipes to reduce runoff into the river. The space is currently all impermeable surface parking lot, so with this woonerf we’re bringing the whole parcel into compliance with new, more sustainable storm-water regulations.”

The addition of environment sustainability to woonerfs could be MSP’s contribution to the design concept’s seemingly expanding definition. So could the notion of “complete streets,” described by the Minnesota Complete Streets Coalition as streets “planned to be safe and accessible for pedestrians, transit riders, bicyclists, and drivers — all users, regardless of age or ability.”

According to an article in The New York Times, “In the United States, more than 400 cities either currently have, or soon will develop, “complete streets,” which are much more broadly defined than woonerfs, even allowing for the likes of sidewalks and the authoritarian stop sign.Yet, according to the Chicago-based National Complete Streets Coalition, the spirit of the woonerf inspired even the American movement.”

As woonerfs take hold in MSP, perhaps in collaboration with the complete streets movement already under way here, alleys will no doubt continue to function as accidental spots for community gatherings, car access, and pedestrian and bicycle right-of-ways. The time is always right for seeking out ways to share our roads and our space.

A walk in the woonerfs: rethinking a realm for bicyclists, pedestrians and cars