The first leg of the METRO Green Line just celebrated its first anniversary and MSP’s transit community is abuzz with a bevy of planned or under-construction projects: the Snelling Avenue ‘A’ Line, the Green Line extension, the Orange Line Bus Rapid Transit line, possible rapid transit along West 7th Street and more.

“Metro Transit has an ambitious vision for bus rapid transit,” MnDOT transit advantages coordinator Shawn Combs Walding said in a recent interview with The Line. “[Bus rapid transit] is a great example of doing what we can with what we have. We need to make these types of investments while we continue the conversation about more ambitious transit alternatives.”

So it’s not surprising that MSP’s first major fixed-rail transit project of the post-streetcar era — the METRO Blue Line — isn’t top-of-mind for most residents and planners. The initial excitement around the line’s opening, back in 2004, has faded; even for the more than 25,000 regular riders who board its trains each weekday, the Blue Line is just another way to get to work, the airport or the Mall of America.

But the Blue Line isn’t all business. There’s plenty to see and do along MSP’s original light rail line outside the 9-to-5 grind — or, if you’re playing hooky from work, any time at all. If you’re looking to get reacquainted with your hometown, start with these five Blue Line stops.

It’s hard to believe that Target Field Station, one of the most important stops in the Metro Transit system, wasn’t included in the original Blue Line plans. The line’s first service trains rumbled to a stop at Warehouse District Station, a few blocks south of the shabby surface lot that would become Target Field. There just wasn’t much reason to venture farther north.

These days, there’s no containing the hotness emanating from Target Field Station and the surrounding North Loop. The North Loop is arguably Minneapolis’ archetypal live-work-play district, though Prospect Park and Northeast are giving the neighborhood a run for its money. Whether you’re taking transit to a baseball game or simply hitting up one of the North Loop’s many happy hour spots after work, the Blue Line is your ticket to ride.

What to Watch For: Several office and apartment building projects are planned or under construction in the North Loop. Longer-term, the Bottineau Line (Blue Line extension) is slated to punch through the North Loop’s northwestern fringe, strengthening connections with Near North and other North Minneapolis neighborhoods.

Whether you call it Downtown East or East Downtown (either is correct, according to local geography experts), the district bounded by I-35W, Hennepin County Medical Center, Fifth Avenue South and the Mississippi River is rapidly changing.

Formerly a dingy, low-energy expanse of surface parking lots and under-utilized industrial buildings surrounding the old Metrodome, Downtown East is lately among MSP’s hippest, fastest-growing neighborhoods — a proximate complement to a resurgent North Loop. A replacement for the Metrodome, a signature park, and a slew of new condo and apartment buildings all promise to inject additional life in the coming years.

What to Watch For: Several new hotels, apartment buildings and condo complexes are planned or under construction within walking distance of Downtown East Station. Downtown East Commons, a four-acre park near the heart of the neighborhood, will take shape in 2016 and 2017.

One stop south of Downtown East is Cedar-Riverside, a vibrant cultural melting pot. The heart of the city’s East African community is also a popular stomping ground for hipsters, artists and U of M grad students. If you’re in the mood to sample a new cuisine, discover MSP’s next musical export, or expand your intellectual horizons at a West Bank lecture hall, punch your Blue Line ticket for Cedar-Riverside.

What to Watch For: Many of Cedar-Riverside’s bars and restaurants, notably Acadia and Palmer’s, double as performance venues. Check websites for information about special events and shows. Also, look out for Cedar Cultural Center’s revamped outdoor plaza, slated to become an all-season neighborhood hub.

You forgot that Minnehaha Falls is accessible from the Blue Line, didn’t you? That’s not surprising. By the time the typical outbound Blue Line train makes it to 46th Street, most of the folks left onboard are either on their way out to jobs at the VA or the Bloomington strip, or heading to the airport for a flight out of town. They’re not thinking about the Grand Rounds, Minnehaha Falls, or any of the seasonal jewels (picnic areas, hiking trails, Sea Salt) tucked within Minnehaha Park. 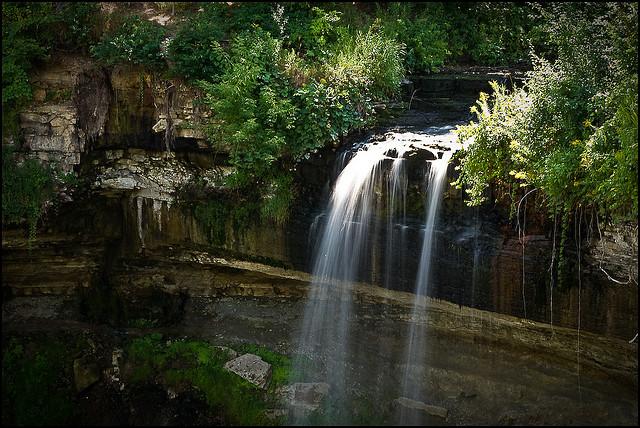 CC/Flickr/Justin
You forgot that Minnehaha Falls is accessible from the Blue Line, didn’t you?

But if the sun is shining, there’s no better place to be. Pack your bike, check your events calendar and choose from two convenient Blue Line stops serving Minnehaha Park.

What to Watch For: Frozen Minnehaha Falls is one of MSP’s top natural wonders. In a typical year, the falls freeze by late December and stay solid until March.

If you grew up in or around MSP, you probably visited Fort Snelling on a school field trip. In case you were tuning out your teacher and/or interpretive guide on your last visit, you need to know that Fort Snelling got its start as a rough-and-tumble outpost on what was then the United States’ northwestern frontier before contributing to at least three major war efforts before its mid-20th century decommissioning.

These days, Fort Snelling is a well-kept ruin on a high bluff overlooking the confluence of the Mississippi and Minnesota rivers on one side, and MSP International Airport on the other. Already a bustling destination for schoolkids and history buffs, the old fort stands to get a lot busier thanks to the nearly 200-unit Upper Post redevelopment, a planned workforce housing project slated to repurpose about two dozen old structures on part of the site.

For now, hop the Blue Line to Fort Snelling for a leisurely jaunt back through two centuries of military and civilian history. Don’t forget your bike or hiking shoes: The Minnesota Valley Trail is part of dozens of miles of riverfront and woodland trails along the Minnesota and Mississippi rivers.

What to Watch For: The Upper Post redevelopment is the big item on the agenda for Fort Snelling and environs. With a bigger daytime population, the area may be able to support a handful of local shops, restaurants, and perhaps even a brewery.

The Blue Line runs along 5th Street, about two-thirds of the way up Nicollet Mall. But no point on the pedestrian thoroughfare is more than a half-mile walk (or free bus ride) from the station. If you’re reticent to brave the elements on a cold winter’s day, never fear: Minneapolis’ extensive skyway system offers easy, climate-controlled access to most of the mall.

What to Watch For: Everything. Areas of particular interest include an outdoor Reading Room seating area between 11th and 12th Streets; two new green spaces (Loring Woods and Mississippi Woods) bookending the mall; a high-tech Light Walk between 6th and 8th Streets; and a totally reimagined Theatre in the Round performance space between 3rd and 4th Streets.

5 stops not to miss on the Blue Line