Back in the day — before the Internet, smart phones, mobile tracking and other technological innovations — bus riders carried pocket schedules. That’s right: small, folded, printed paper schedules created by Metro Transit that could be easily carried in a backpack, purse or pocket.

At Metro Transit’s Fred T. Heywood Office Building in Minneapolis, up to 40 consultants answer questions from riders (612-373-3333, option 2) about how to get from one place to another, via bus or light-rail transit. Using Metro Transit’s interactive trip planner (the version available on Metro Transit’s website drew 6 million users last year), experts direct callers to the nearest station and their final destination, and help them plan future trips.

According to John Howley, who manages Metro Transit’s Information Center (which includes the call center), experts receive approximately 5,000 calls a day and handle more than 1 million calls a year. “We serve the wide variety of customers that use transit,” he says, “from out-of-town visitors to new riders that need info about routes to everyday riders getting to work or school. We have people who call us on a regular basis asking ‘When’s my next bus?’ During bad weather and during sporting events, we get very busy.”

If English isn’t your first language, no worries: Assistance is available in 170 languages. “We added our language lines about two years ago,” Howley explains. “When a customer calls in, the representative they’re speaking with determines what kind of interpreter they need, then sets up a conference call between themselves, the interpreter and the customer. Currently, we’re looking at reconfiguring that arrangement, so that customers are asked if they need an interpreter right from the start.”

Finding new and more efficient ways to provide riders with information is ongoing at Metro Transit. At a time when more people are carrying smart phones, and using them pay for more of life’s essentials, Metro Transit has been innovating new ways to meet riders’ needs.

The smart phone as transportation tool

On November 3 last year, Metro Transit launched its first free mobile app, available for download on Google Play or iTunes. As of January 13 of this year, says Adam Mehl, market development specialist for Metro Transit, “7,700 accounts had been created for the app, with 12,000+ downloads from both platforms.”

“We’re all about reducing barriers for customers,” Mehl continues. “We’d been hearing from customers, for a long time, that they wanted to get their information—and pay their fares—using an app on their smart phones. Not only is the app faster and more efficient for customers to use, mobile fare payments result in quicker boarding and are cheaper than paying cash in terms of collecting fares.” 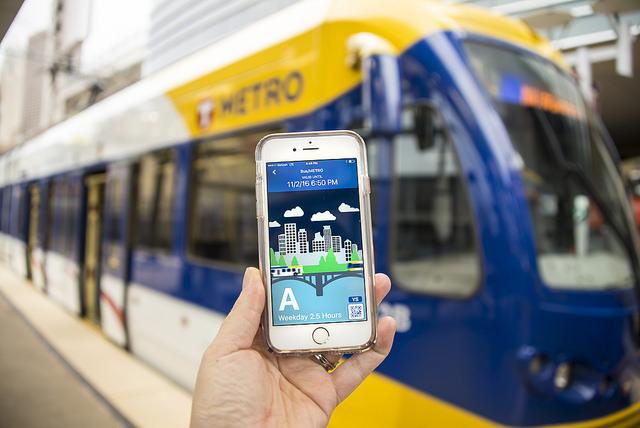 More features will be added to the app this year, Mehl says, including enhanced and advanced trip planning, ways for customers to contact Metro Transit with public safety concerns and systems to alert people as to when their tickets are expiring. “We’re actively working to polish it up,” he says of the app, “ so more customers become more comfortable using their phones as a transportation tool.”

Another of the features on the app is NexTrip, which provides real-time departure times for buses to help customers better plan trips. Every bus has an onboard computer that tracks its GPS location. As a bus travels along its route, NexTrip tracks the bus’s location in relation to specific time points, automatically updating every few seconds.

Customers can also text ‘MT’ followed by their bus stop number (found on the Metro Transit sign at the stop) to 27299 and receive time and schedule updates.

“Text messaging is really taking off and we’re rolling it out on our bus signs,” Howley says. Signage with texting info “will be on all routes by the end of the year. We currently have 13,000 signs and have 8,000 completed so far.”

To keep up with transit-industry changes in customer service, says Howley, the call center is exploring options for expanding beyond voice or phone calls, to also answer rider questions via chat, email and text. “We need to be providing our customers with information in the ways they want to receive it,” he says.

The process of innovating new transit tools includes paying attention to what the industry and Metro Transit’s peers are doing, their experiences with new technologies and lessons learned, Howley says. Metro Transit also has a division dedicated to “forward-thinking exploration of new technologies,” Howley adds, and he has personnel in his office dedicated to researching new technologies “to stay on the leading edge of providing information to customers in ways that are convenient, accurate, fast and useful to them.” 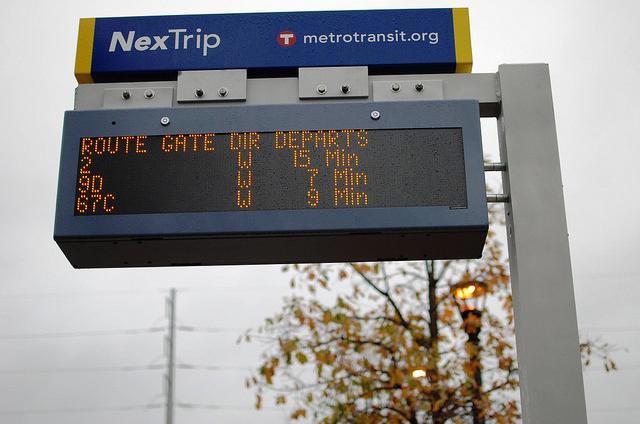 Improving customer service is good for Metro Transit, too. “There’s a very close connection between ridership and a call to the center,” Howley says. “In a survey done several years ago, we found that 94 percent of customers who called us followed through and used the transit. So it’s like we’re selling tickets when someone calls.”

Not only are new transit tools for riders good for everyday users, to support and improve ridership, but also “for rolling out the red carpet for new customers,” Howley says. Adds Mehl: “I’m happy to say we’re on the leading edge of transit companies innovating these tools. We’re on the early side of things and proud of that.”

This article is reprinted in partnership with The Line, an online chronicle of Twin Cities creativity in entrepreneurship, culture, retail, placemaking, the arts, and other elements of the new creative economy. Camille LeFevre is the editor of The Line.