Driving north from Des Moines not long ago, I veered off the freeway to a place I knew about but had never had any reason to visit. When I got there, I could see why: Mason City, Iowa was a miserable looking town filled with functional commercial buildings that left me with a vague feeling of despair as I passed them by.

Nonetheless, I was there because the city had done something historic, something of such cultural significance that I had first seen mention of it on the BBC. It had saved and restored one of the most important buildings in the world, the City National Bank and Hotel, designed by Frank Lloyd Wright and first opened in 1910. Now it had been reborn as the Historic Park Inn after a $20 million renovation.

It may be news to you that Mason City exists, let alone that it has such a building. But it does, and the fact that this is not widely known seems to me like some kind of crime. Barely anyone is aware that one of the most architecturally significant hotels in the world could exist in an ordinary, downtrodden Midwestern town. It is this fact that I find both so inspiring and so disturbing. 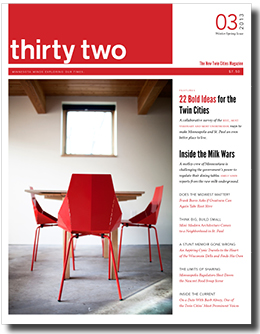 You see, I grew up in Winona, a once-prosperous Midwestern town not unlike Mason City, where many noteworthy accomplishments were not only played down, but just plain forgotten. Growing up, I remember feeling like greatness was something that belonged far away, and that if I wanted to do anything worthwhile, my only choice was to leave. That is, after all, the American story: Go west. Go east. Go somewhere. But don’t stay! For as long as anyone can remember, the Midwest has always been the place you left behind. It is preamble. It is backstory.

After college, I got a job at the Winona Daily News, and one of my assignments was to write about the city’s history for a special section. I spent months digging around in the Historical Society archives. One of my stories was about the town’s architecture. I was amazed at what I found: Cass Gilbert, the architect who designed the US Supreme Court and the Minnesota State Capital, had designed our library. Ralph Adams Cram, who had rebuilt West Point and designed the Princeton Cathedral, had built the Watkin’s Home. The Merchants National Bank, designed by the renowned architects William Purcell and George Elmslie, was possibly the finest Prairie School jewel box bank ever built. And right next door to my parents’ home was a house designed by Frank Lloyd Wright’s son, John Lloyd Wright.

These were great works of art right here. Yet, no one I talked to seemed to know about them, or care. It’s possible that architecture, art, or history are just not their concern. But I also felt like there was something else at work. This suspicion resurfaced when I first heard about the Historic Park Inn.

The Midwest has long suffered from a profound inferiority complex. Most of us can list the people from our state, or town, who have made it big elsewhere, from the Coen brothers to Diablo Cody to Bob Dylan to David Carr. That is the arc of a million stories, from Horatio Alger to The Great Gatsby to Ernest Hemingway himself. In fact, when The New Yorker was founded it proudly announced that it was “not edited for the old lady in Dubuque.”

There is some basis in reality for this: there are good reasons for writers to go to New York, for actors to go to LA, for techies to go to San Francisco, and so on. But this fact leaves us with nagging questions. Does the Midwest matter as more than just a talent farm for the coasts? Do young people have to leave to make it big? Can greatness take root here? And if it takes root, can it grow?

The world has changed much since the Midwest solidified itself in the nation’s psyche, and I’m not even sure if the term ‘Midwest’ is relevant anymore. Looking around I see that there are many Midwesterners, be they Africans or Asians, farmers or hipsters, Latinos or Anglos. I can’t help feeling like the days of Gopher Prairie and Lake Wobegon are long past.

Still, our anxiety about our place in the culture remains, and my fear is that it makes us unable to see the true value of things closer to home, that our inferiority complex contributes to a sense where we are allowed to be the culture’s consumers, but not its producers.

This was never something Frank Lloyd Wright felt. For him, the geography of the region was inspiring, not isolating: “We of the Middle West are living on the prairie,” he wrote. “The prairie has a beauty all its own and we should recognize and accentuate this natural beauty, its quiet level.” He did briefly move to Europe, but he built his own architectural utopia in Spring Green, Wisconsin and the world beat a path to his door.

Wright worked in a different era, at a time when people still felt a sense of destiny, before the energy it took to settle the region had dissipated, and back when almost anything seemed possible — even an entirely new, entirely American architecture.

When I stand in one of Wright’s buildings, I get the same feeling as when I stand in front of a Grant Wood painting, or when I read Mark Twain. They too were of the Middle West, but there’s no self-deprecation, no apology, no self-consciousness about this. There is only ambition and brilliance and the feeling that they were part of the whole, not just part of a part.

That is my hope for the new Midwest, and I believe we are on the way there, as a new generation of connected artists and thinkers push past the Hollywood tropes and Keillorian caricatures. Rather than feel like the national discourse is something we’re listening in on, we again feel like it’s something we have a voice in.

Maybe I’m fooling myself, but that was the feeling I had standing in the lobby of the Historic Park Inn, where, after decades of decline and neglect, the genius of the place had finally been restored and honored: the original furniture rebuilt, the light panels replaced, the bright carpets redone.

It was like stepping back in time to a place that existed in the mind of Frank Lloyd Wright: One with clean lines and interlocking spaces, where a building mirrored the landscape outdoors. It was like being transported to a place where the power of an idea mattered more than the place it came from, and where the wildest dreams could grow right up out of the ground, anywhere. Even here.

Does the Midwest matter? Notes on the geography of greatness