In the southeast corner of Minnesota is a small farm where my wife’s family lives. It’s beautiful country, with rolling hills and deep valleys. Behind their house, a bluff rises straight up, and when I was younger I used to climb it and sit on a rock with my journal and write. 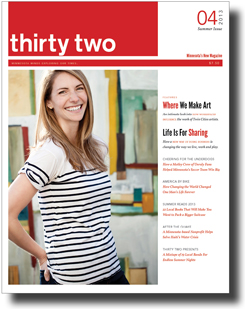 It’s embarrassing to think about now, but at the time I had notions of becoming a latter-day Thoreau, giving voice to the land. I loved nature and I loved writing, and it seemed like a perfectly good idea to combine the two.

Really, though, I had no idea what I was doing. I didn’t even know what it was I loved about nature, or even what exactly I meant by “nature.” Basically, what I now realize I meant was simply “being outside.” But back then it seemed like so much more, and I was sure that by writing about what went on in the woods, I could impart valuable lessons about life.

By and by, that period came to an end, helped along by some time spent in Africa where I saw that living close to nature actually meant chopping wood and hauling water, which (despite a passing interest in Zen) I wasn’t really up for. Nature, I came to see, didn’t much care whether we lived or died, and it was only our distance, our protection from it, that let it become something revered. If nature was beautiful and instructive, it was also heartless, terrifying, and cruel. It was so many things at once, and I came to feel that that’s where its true beauty lay.

I can’t remember exactly when these thoughts came together, but it must have been around the time I noticed a painting on the wall of my in-laws’ house. It was a depiction of their farm done by a successful artist named Michael Sieve. It was called God’s Country, and in it, their field was full of sunlight and horses — though in reality, they only had cows. The colors were bright greens and golds, and rich reddish browns, as if it was a late summer morning.

It was beautiful and technically impressive, but what I remember most is looking at it and feeling like it was a foreign thing. I would stand and stare at it trying to puzzle out its appeal. Because even though it was the same landscape I loved, it felt flat. It felt like the farm had been encased in Plasticine and put on a shelf. It felt like nature shellacked, like just a thin slice of the place I knew.

The painting, and most of Sieve’s work, is done in the genre known, for lack of a better term, as “wildlife art.” Across much of the country, this is the dominant art form and it is a huge, multi-million-dollar market. Usually, instead of horses, Sieve paints deer, birds, or some other type of quarry, as do most working wildlife artists. Nearly all of it left me similarly unmoved.

Maybe there was something I was missing. After all, for nearly all of human history, nature was our great subject. Painting animals — the hunt — may be our oldest artistic activity. More recently, the great explorers of the New World (like Audubon) used wildlife painting to document the species they found. By the 1800s, sporting art had grown hugely popular, and paintings of the Western landscape transformed the way we saw the country. But by the 20th century, the frontier had closed, and the world was changing rapidly. For one thing, people were moving to cities, moving indoors, in unprecedented numbers. The art world was not immune.

“Wildlife art got separated from modern art in the mid-20th century,” says David Wagner, author of American Wildlife Art. “That was when art historians developed a taxonomy for organizing art history into “isms”: impressionism, expressionism, dadaism, modernism. Before the 20th century, wildlife art was just art.”

Tom Wolfe wrote about this shift away from realism in his 1975 book, The Painted Word. After growing increasingly abstract, he wrote that, “Art made its final flight, climbed higher and higher in an ever-decreasing, tighter-turning spiral until, with one last erg of freedom […] it disappeared up its own fundamental aperture…and came out the other side as Art Theory!”

Around that same time, a young Michael Sieve was studying at Southwest State College in Marshall, Minnesota. I know this because I recently drove down to talk to him and to try to sort out my ambivalence — not about the The Painted Word, but about the painted bird.

Sieve’s home was perched on a hilltop overlooking a valley that could have come straight out of one of his paintings. I parked in the slushy snow and walked across the road to his studio, where he met me at the door and invited me in. He wore a gray goatee, wire-rimmed glasses, and a denim shirt with a crane embroidered on the back. His studio had big windows and lots of light. It was full of animal pelts, antlers, taxidermed birds, and paintings of wildlife still alive.

I sat down on an old couch and Sieve pulled up a chair. He had an easy, down-to-earth manner and before long was telling me about how, as a boy, he’d been inspired by the paintings of Les Kouba, which occasionally ran in the Minneapolis Tribune. Then in college, he started out in advertising, but quickly switched to studio art.

“People tried to urge me to do more modern art,” he said. “And I did. Some of them — quite frankly — were powerful paintings. The most powerful were in the direction of Larry Rivers. But whenever I painted any undercurrent of wildlife art, I got a lot of criticism. It was basically considered a waste of time. So I did it on my own, and didn’t show anyone.”

When he had finished college in the early 1970s, Sieve headed out to the highway, stuck out his thumb and hitchhiked west in hopes of seeing the national parks. At one point, he found himself in Jackson, Wyoming, a town that was packed with wildlife and Western art galleries. (It’s now home to the National Museum of Wildlife Art, which was officially sanctioned by Congress in 2008.) There, he remembers standing in front of a John Clymer painting of bighorn sheep walking through the snow, called High Ground.

“When I looked at that,” he said, “I thought, here’s my direction in life. I thought, this is what I want to do, and I can do it.” Back home, Sieve worked in slaughterhouses — on kill floors — and painted at night. But by 1979, he’d sold enough work to figure he could make a living at it. So he quit and has painted ever since.

We talked for a while longer about some of his paintings, his conservation efforts, the link between wildlife art and conservation, the habitat restoration he’d done, and about the money (“literally millions”) he’d raised for conservation, until finally I got around to asking about his goals as a painter.

“My goal is very selfish,” he said. “My goal is to keep painting. I like to paint, and I want to keep doing it. And I want to live in a place I love. I don’t really worry about my legacy or anything like that. I guess that’s important to some people.”

“But,” I asked, “what’s your goal with a particular painting?”

“Well,” he said, “a painting tells the story about a relationship and a feeling.”

“What’s the feeling in this one?” I asked, pointing to a series of him and his daughter turkey hunting.

“Absolutely. That’s part of it. My relationship with my daughter, my conservation ethic, and the whole lifestyle I live are all encompassed in that painting.”

“That’s a good way to put it. It’s a celebration of where I live, what I believe in, what I do, and who I want to do it with.”

I asked what his most popular paintings were.

“Well,” he said, “deer have paid more bills than anything else by far. If I wanted to just make money, I’d paint deer after deer after deer. But that’s not what I’m about. I like to bounce all over the board, and paint inspirational outdoor paintings.”

Something clicked in the back of my mind when he said the word “inspirational,” though I didn’t quite know what it was. That came later, after I’d said good-bye and made the long drive home, and was talking to David Wagner, who told me that “most of wildlife art is pretty pictures, competently painted, celebrating the beauty of nature in a pristine sort of way. You don’t get much of the ugly side.”

In his introduction to American Wildlife Art, the painter Robert Bateman aired a similar sentiment, complaining that in wildlife art, “The same few furrows are plowed over and over — wolves, bears, big cats, loons, game birds, and backyard avian favorites. The rest of the huge and complex world of nature is all but ignored.”

That, I think, was why God’s Country never rang true for me. It was a place of beauty and harmony and good feelings, of celebration and success. It was inspirational. It was a place people wanted to believe existed. Maybe they needed it to exist. Or maybe, for them, it actually did.

But for me, that place had stopped being real a long time ago. It wasn’t that I didn’t still love nature, or that I just wanted to see the ugly side. It was more that I wanted to see all of its sides. God’s country, in my mind, had become a place where both darkness and light intertwine for a different kind of beauty, one I’ve never quite seen on the canvas or on a page, but that I can still find on that hilltop, on the clearest days, looking down into the valley below.