On opposite sides of 12th Street sit the well-loved historic rehab that is the new Lunds store and the award-winning symphony of meat, bourbon, and exposed wood that is Butcher & The Boar. Three blocks up at Ninth is Crave, a sideshow of glam and questionable taste that mints money wherever it opens. A block north at Eighth, there is Union, the new winter garden restaurant with a retractable roof.

The projects have little to do with one another, save their ambitious audacity and their designer, Shea, Inc. The firm is an oddball as businesses go, offering architecture, interior design, and retail branding. But its sweet spot is restaurants. Nobody knows restaurants like David Shea and Tanya Spaulding.

From Macy’s to Murray’s and most niches in between, the firm has become the go-to-guru of the nation’s scariest business niche. If you’re opening a restaurant, you want them on your side.

David Shea, the firm’s founder and owner, is 65, a native Bostonian with a thick New England accent even after 40 years in the Twin Cities. Spaulding, whose title is principal, is 41 and a Paynesville native, and is about as direct as a Minnesotan gets. Together they have created concept for and designed the area’s most successful restaurants, turning the industry’s daunting odds on their head.

It is an article of faith in American business that everyone wants to open a restaurant and no one knows how to make money at it. The old joke: To end up with a million dollars in the restaurant business, just start with 5 million. Failure rates of 90 percent are bandied about, though David Shea suspects it’s closer to 50 or 60. What is clear is that it is a sexy trade from the outside and an ugly one from the inside.

“It is not for the faint of heart,” says Spaulding. “It is often not profitable. It is a 24-hour job. There are so many moving parts that you can’t see them all.”

Businesses come to Shea for services as modest as blueprints and architectural plans, or as grand as full-on concept development. They come as wide-eyed romantics or beaten and bloodied, looking to save their hide. There is one constant: “We’re the firm they call,” Spaulding says, “when they don’t know what to do.

“We get a lot of clients who just can’t figure out how to make money.” It starts with real estate. “They fall in love with a space, they don’t read the fine print of their lease, and then they have no money left to build out the restaurant.”

Then there is poor food and service. “Either of those overwhelms any positives,” says Spaulding.

And a great chef is not a solution in itself. “The spectrum of chefs and what they know and don’t know is about as broad as their food,” says Spaulding. “Some really know what people like to eat; Isaac Becker [Bar LaGrassa, 112 Eatery] is an example. Sometimes talented chefs need to find the right context, like Tim McKee [La Belle Vie] or Sameh Wadi [Saffron].”

1998
Enters marketing/graphic design with purchase of outside firm.

David Shea’s general thesis is that awards and accolades do not translate to profits. “And most of what looks and tastes successful,” says Spaulding, “is not.”

What works? “Constantly looking in the mirror,” says Shea, “and knowledge of who your customer is and what they expect.”

So why does a design firm “get” restaurants better than many restaurant companies? “Because restaurants today are theater,” Shea insists. “It’s a progression of experiences.”

Spaulding elaborates: “You have to figure out, when someone is sitting there, how to get them to feel the way they want to feel.”

Part of it comes down to accepting that restaurants are not dining rooms purveying “love,” as many chefs insist, but retail showrooms. “And retail lives on look and feel—branding,” explains Warren Wolfe, vice president of food services for Macy’s and a Shea client.

Design works on a macro level; “Continuity and consistency in look and feel allow you to have a compelling concept,” says Kam Talebi, CEO and owner of Kaskaid Hospitality (Crave, Union).

Design works on a micro level; “Putting desserts out front at Yum!, before customers ordered food, was intentional and drives sales every hour of the day,” explains Patti Soskin, Yum!’s proprietor, also a Shea client.

The business isn’t getting any easier; in fact, quite the opposite. “People are better-traveled, exposed to more in the media,” says Shea. “They collect experiences and bring them to bear in their daily expectations.”

And loyalty is a thing of the past, especially among the customers who dine out the most. “Younger diners are migratory and flit to the next big thing,” Spaulding tells clients. “They don’t sustain you; they descend in a horde and then go.”

The good news is that Shea, which does business all over the country, is bullish on its hometown. “We probably have one of the best dining markets in the country,” says David Shea. “People here want to support local chefs. They like authenticity and heart. They prefer comfort and consistency over style.”

The restaurant trade seduced Shea, an architect by training. “I’ve been focused on consumers for 34 years, but restaurants are fascinating because they exemplify a culture, and they are how people connect.”

Shea’s evolution into the insiders of the restaurant trade was not a deliberate goal at the outset. “I’m an architect and interior designer. But I realized architecture wasn’t the answer,” he says. “I was never satisfied with what it delivered. Architects are pretty rigid.”

Shea describes his firm as structured like a marketing agency, the result of his purchase of a marketing/design firm in 1998. At the time, no competitor, he says, combined marketing, design, and branding for consumers. Shea has similar competitors, but none that dominate in the restaurant space.

That has worked to the firm’s advantage in tough times. “Marketing, branding, refresh of concepts is more recession-proof than built environments,” explains Spaulding. “That smooths out our business.”

The business currently averages $4 million to $5 million in annual billings, says Spaulding, who describes the architecture side as “low margin,” the “value-added” businesses—concepting and project management—more profitable. Its current mix of restaurant business is about 60 percent architecture and design and 40 percent concepting, says Spaulding. Seventy percent of its recent billings were out of town, but the mix is normally 50/50. The firm did business in 34 states in 2012.

Shea works on billable hours for some clients, a monthly retainer for others. He does not like to work on a percentage of costs because then “we don’t feel like partners,” says Shea. “I don’t want a windfall from cost overruns.”

Shea’s pricing can be challenging for small operators, “You pay more, but you get what you pay for,” says Yum’s Soskin.

David Shea pleads no contest. “We charge fairly, but we charge.”

The firm peaked at 65 employees in 2000, when it opened a New York office, which has since closed. Currently Shea employs 30 FTEs plus contract workers, and can fit 45 to 50 people in its new offices above Union restaurant at Eighth and Hennepin. “We don’t want to be bigger,” says Spaulding. “We’re not personnel managers.”

“David is constantly evolving,” continues Spaulding. “He is the visionary. My job is to make it operable.”

Shea’s restaurant clients come from every direction, with an array of different needs:

The firm’s approach is assertive. “We’re very opinionated, we like to question,” says Spaulding. “We’re not shy. Some listen to us, some don’t. We overwhelm some people, I’m sure, and we scare others off. But we’re not order-takers.”

She says Shea’s point of difference is that the firm breaks down barriers between disciplines “that our competitors don’t, because we are looking at more than restaurants.”

The duo are constantly on the road, sampling what’s hot and what’s not working. “We get hired because we’re aware of what’s out there,” says Shea. “And because we understand our customer’s customers.”

Simply put, “they just know restaurants so well,” says Patti Soskin. “David can tell you how to design your kitchen and he can tell you what real estate is available. Who else can do that?”

Shea’s batting average is stunning. Of 50 local food/restaurant clients Shea has worked with over the last five years, 47 remain in operation; another changed its concept (Chambers Kitchen) and two were outright failures, both with the same owner.

“We can’t tie our name to something that isn’t successful,” Shea says, “but we probably take on more poor business prospects because we like to work with talented people who may not have a clue how to run a business. I like to mentor; it gets me up in the morning.” That wasn’t enough to help Shea’s most notorious client, former Cargill exec Jim Ringo, who hired Shea to design (but not concept) two ambitious restaurants that opened simultaneously—Ringo at the West End and Forum in City Center.

“We never should have taken on a client trying to open two restaurants,” says Spaulding, who admits she sensed doom. “We should have tried harder to stop him, but when an entrepreneur is so set on a vision, they don’t always want to listen to you.” Both restaurants failed before their first anniversary, and Ringo, who has declined to speak to the press since, lost millions.

The Ringo experience was nonetheless difficult for Shea. “David takes it personally,” says Tim Murray of Murray’s. “He feels a sense of ownership. He and Tanya have been back here to eat so often since we renovated, to keep their eye on things. He gives us negative and positive feedback.” 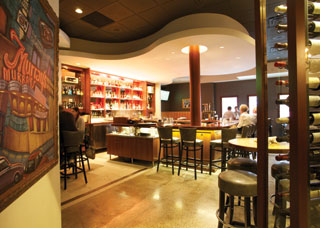 “A lot of companies are in it for the fees and move on,” says Talebi. “We have a long-term relationship with Shea because I know they really care.”

Post-Ringo, there is a subtle evolution of mission. “I don’t want to take someone’s money if I think he is going to fail,” says Spaulding. “We won’t do drawings if we don’t believe in the concept.”

Not everyone can become a client. North Loop restaurant Sapor, where Shea and Spaulding dine occasionally, “had not changed one thing in their space in eight years,” says Spaulding. “We went and talked to them. They’re in no position to become clients, but we just wanted to see if we could help. Honest to God, we do it all the time.”

And in the restaurant game, Shea’s help may not be a luxury, but the difference between profit and loss.

Shea completed a year of statements on Hennepin by getting “some skin in the game,” says David Shea. Built in the late 1800s and largely destroyed in a 1947 fire (burn marks are still visible on an interior brick wall), the building housed Snyder Drug’s headquarters, then Burger King, then Shinders, and was transformed late last year into a basement nightclub, multilevel indoor-outdoor restaurant, and Shea’s new corporate headquarters on the second floor.

Described as an “adventure in found materials,” from old light fixtures to reclaimed timber, the former World Wide Pictures and Walker Family Foundation building was transformed into a rustic, masculine, meat-centric restaurant. Cost considerations prompted the architects to retain the marble exterior, providing a surprise when you enter and find a moody, turn-of-the-century feel.

Shea seamlessly joined historic and new-build structures to create a compact urban grocery store notable for its vast expanse of windows, once anathema in the grocery trade. “Natural light is never a negative,” says David Shea.

The mid-1940s steakhouse had been repeatedly renovated since its inception, but retained a design that ranged from old-world elegance to tired and seedy. Shea created private dining space, drained formality from the dining room without sapping its elegance, and brought the aged bar a spritz of energy and verve.