By the time you read this, the Great Lakes–St. Lawrence Seaway system, which includes the Port of Duluth-Superior, will be open for the 2013 shipping season. Dock workers in the port will have been loading tens of thousands of tons of coal and iron ore that have piled up over the winter into the cargo holds of “lakers” — vessels up to three football fields long that ply the Lakes — preparing to make deliveries to power plants and steel mills on the shores of Michigan, Indiana, Ohio, and Ontario, and out the Seaway to overseas markets.

To Minnesotans outside the Iron Range and Duluth, the Duluth-Superior port is about the Edmund Fitzgerald, Aerial Lift Bridge, and waving to ships from the shores of Canal Park. But to the northland and the economies that flow through it, Duluth-Superior represents more than maritime romance: It’s a link between the Upper Midwest and markets worldwide. In fact, while domestic and Canadian shipping activity remained even-keeled between 2011 and 2012, overseas shipments increased by about 50 percent. Last year, they represented roughly 6 percent of the port’s annual total tonnage.

The Port of Duluth-Superior thus also provides a significant economic boon for the state, if one whose contributions aren’t universally known. An October 2011 economic assessment of the ports by Pennsylvania-based consultancy Martin Associates determined that the port accounts for $1.5 billion in business revenue for the firms directly dependent on cargo handled in the port, and 11,510 direct and indirect jobs in Minnesota and Wisconsin. Port activity directly accounts for 3,000 of those jobs. That’s far fewer than just a few decades back, when local residents who didn’t work on the waterfront all seemed to have at least one relative who did. These days, most of the longshoremen’s muscle has been taken over by automation. As a result, “we find we have to re-educate [local] people about the value of having an international port in our own backyard,” says Adele Yorde, public relations manager for the Duluth Seaway Port Authority, the public entity that manages the ports. 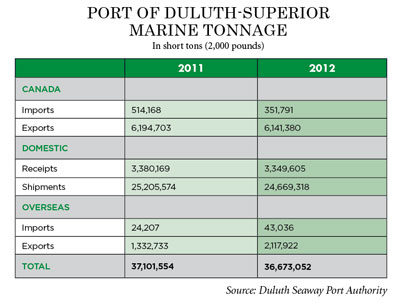 Just so that you’re educated: Duluth-Superior, the largest port on the Great Lakes–St. Lawrence Seaway system, is “absolutely essential” to its shipping ecosystem, according to Craig Middlebrook, acting administrator of the Saint Lawrence Seaway Development Corporation, which manages the Seaway from the St. Lawrence through the Great Lakes. By way of proof, he notes that “23 percent of all outgoing cargo shipments through the Seaway [in 2012] were out of Duluth. That’s a big, big driver.” This year, he says, the Seaway expects roughly the same tonnage growth as in 2012, about 3 to 4 percent.

At Duluth-Superior, Duluth Seaway executive director Adolph Ojard predicts slightly higher tonnage in 2013 following a year Yorde terms “good, if not great.” Though total tonnage last year was a little lower than in 2011, it was much better than in 2007 and 2008, when the Iron Range mining industry all but collapsed. Another significant cargo has been, and remains, grain, the vast majority of which goes overseas nowadays. Drought lowered 2012 grain exports out of the port by about 20 percent, but shippers originating in Duluth-Superior exported hundreds of thousands of tons of North Dakota and Minnesota wheat, particularly the high-quality durum beloved by North African couscous makers and Italian pastifici.

Shipments to Canada of Montana and Wyoming coal—another longtime stalwart—have shrunk in recent years, primarily because some provinces are making a push toward renewable energy. But the ports have also benefited from renewables. Both imports and exports of wind turbine equipment, including blades produced in North Dakota and sent to Brazil and elsewhere, move through Duluth. At the same time, shipments of coal from Duluth-Superior to overseas markets more than tripled in 2012, to 1.4 million tons.

Some of the items brought into port and dispersed throughout the region include limestone, road salt, and cement. Heavy equipment, particularly for mining, also comes in to Duluth-Superior.

But perhaps the hottest cargo topic recently has been the possibility that petroleum would again be shipped out of the port for the first time in more than two decades. Indianapolis-based Calumet Specialty Products Partners, which owns an oil refinery in Superior, is looking into building a $25 million dock on the Wisconsin side that would ship oil from North Dakota and Canada to refineries in eastern North America. If the proposed Keystone XL pipeline from Canada to the Gulf of Mexico is constructed, that might sink the proposal; and environmentalists have expressed Alaskan oil spill–sized worries. But if the dock project goes forward as planned, oil tankers could begin departing from Duluth-Superior in two years.

Oil or not, the Port of Duluth-Superior has shown that it can adjust to the ebbs and flows of maritime business.

More Than Ore: Duluth-Superior port is a gateway to global markets