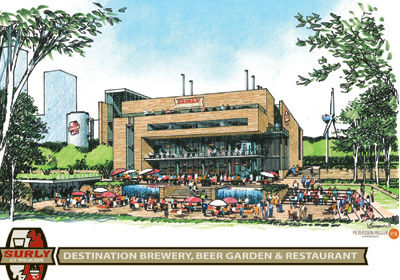 More than two years after Surly Brewing Company started its quest to build a $20 million “destination brewery”—a process that involved changing state liquor laws and obtaining environmental cleanup grants—the company said Monday that it has closed on the purchase of its brewery site and picked a construction firm to build the project.

Brooklyn Center-based Surly said it has closed on 8.3 acres of brownfield land on the northeast corner of Malcolm Avenue and Fifth Street Southeast in Minneapolis. A small portion of the property, which is located in the Prospect Park neighborhood and once housed a Northern Star Company potato processing plant, is technically in St. Paul.

Surly did not disclose the purchase price but said it is working to secure approval for the remediation process, and it hopes to begin cleanup efforts this fall.

Surly applied for more than $2 million in grants to aid the cleanup and was recently awarded $1.5 million from the Metropolitan Council and the Minnesota Department of Employment and Economic Development. It expects to learn later this year whether it will receive an additional $500,000 from Hennepin County.

With its site purchased, Surly said it has picked two new partners to help it move forward with the project: Minneapolis-based Barr Engineering is leading the environmental remediation process, while St. Paul-based McGough Construction has been tapped to build the brewery after environmental cleanup is complete. McGough has built notable Twin Cities landmarks including the Guthrie Theater and the Ordway Center.

McGough is currently collaborating with Surly; Minneapolis-based HGA Architects, which is designing the project; and local real estate advisory firm Tegra Group, which assisted in site selection, to refine the design, budget, schedule, and municipal approvals required prior to begin construction, Surly said.

Last June, Surly narrowed its list of potential sites to a handful of options, and the Prospect Park area of Midway was at the top of its list. Surly said that the site can accommodate a brewery that is capable of brewing 100,000 barrels per year, with room for additional growth. The property is also close to a variety of transportation options, including the new Central Corridor light-rail line. Plans for the destination brewery call for a beer hall and beer garden.

“It took us two years to find the perfect location, and now we’re finally ready to plant the Surly flag in the Prospect Park area of Midway and continue the next steps to build our $20 million Destination Brewery,” Surly founder and President Omar Ansari said in a statement. “The Malcolm Midway site has everything we need to build a world-class brewery. We’re excited to be moving to a central location that’ll be a destination for everyone in the Twin Cities.”

After announcing plans for its new brewery, Surly helped spearhead a change in state liquor laws to allow “taproom licenses” to permit Minnesota breweries that produce less than 250,000 barrels of beer to sell pints of their own beer on their premises. (Previously, breweries that produced beer to be distributed at bars and liquor stores were not permitted to sell pints on-site.) The so-called “Surly Bill” was signed by Governor Mark Dayton in May 2011.

“The City of Minneapolis has worked closely with Surly for years, first to pass the bill that allowed this project to move forward, then to transform a formerly blighted site into a destination brewery and the latest Minneapolis beer hot spot,” Minneapolis Mayor R.T. Rybak said in a statement. “It’s a great example of how government can work with a great small business that makes a great local product to create good jobs in manufacturing, hospitality, and tourism.”