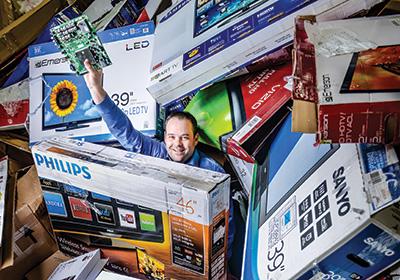 Jimmy Vosika drove to Kansas City with a simple plan: He was going to buy four damaged plasma TVs and resell them on eBay. He’d already flipped a set he bought for $200, turning around and selling it for $700. It was 2006, and the St. Louis Park native had found a hobby that was making him a little money on the side.

But the trip did not unfold as planned. The supplier had more TVs than Vosika realized. Vosika decided to go all-in.

“I was just trying to buy four. Well, they had 19. So I had to go rent a U-Haul in Kansas City, bought all the TVs. It was $1,450, I remember,” recalls Vosika. “I was absolutely terrified on my way home—what did I get myself into? My wife’s going to kill me.”

Vosika’s eBay “hobby” has since morphed into the fast-growing ShopJimmy.com, which is garnering national attention. Sales have steadily climbed from $350,000 in 2007 to an estimated $22 million in 2013. His booming business has been built on selling harvested TV parts that once might have been thrown away.

The company is profitable, Vosika says, although he provided no details. He says profits are being plowed into growth. In late 2012, it moved to a 289,000-square-foot space in Burnsville, a transaction that ranked as one of the largest local industrial lease deals of the year.

Vosika does not look the part of a successful business owner. Sitting down for a meeting, he’s clad in a black ShopJimmy T-shirt, shorts, a baseball hat with a Titleist logo, and 5 o’clock shadow. Vosika owns the company, but seems like just another dude.

The core of ShopJimmy’s business is taking working TV parts—circuit boards, power supplies, sensors, capacitors, transistors, resistors and more—from sets that might be externally damaged, and reselling them. The company’s customers are a mix of electronic repair shops and do-it-yourself hobbyists, but also include extended warranty companies and even manufacturers who are trying to locate parts. ShopJimmy has also branched into selling related products, such as TV stands and wall mounts.

At its Burnsville headquarters everything happens under one roof. TVs are torn apart and components are shipped from the facility, which also houses customer service and marketing staff. Vosika says that at any given time there are more than 10,000 TVs on site waiting to be torn apart.

“Nobody has an office. It’s part of the culture. Someone can walk up to me at any time,” says Vosika, who does not call himself CEO, but rather “director of partology.” The company has about 80 employees.

Vosika, 33, is not the average entrepreneur. He does not have an MBA or any traditional business training. After leaving high school, he resisted going to college: “I wasn’t sure what I wanted to be when I grew up.” For a time, he worked for Northwest Airlines, loading baggage onto planes. He later earned a two-year degree in computer programming from Brown College.

He worked for his father-in-law’s appliance recycling business as he dabbled in TV sales, but the TV business kept growing. An opportunity popped up to buy a semi-trailer of 300 TVs. To do the deal, Vosika mortgaged his house, partly to buy TVs and partly to expand his garage to contain his growing operations.

“I built a garage as big as I could because that was going to be where I was going to run this business for the rest of my life, basically. It was going to be big enough forever,” Vosika says. “That was a big turning point because I had leveraged my house. . . . I was scared.”

Vosika formally founded ShopJimmy in 2007 and hired his brother as his first employee. About six months later, they bought pizza for some friends at a local TV repair shop to get a crash course on their inner workings. But as the business grew, Vosika still kept his day job. “Basically my wife and family, they didn’t want me to quit.”

But ultimately, Ness Electronics was not a fit for ShopJimmy. In the wake of the unwinding of the deal, Vosika picks his words carefully in a statement to Twin Cities Business: “After about a year into our acquisition of Ness Electronics and a period of careful deliberation, we’ve decided to separate from the company and resources we obtained in the deal.”

In 2011, Forbes named ShopJimmy to its list of “America’s Most Promising Companies.” It has earned a spot for three consecutive years (2011-2013) on Inc. magazine’s list of fastest-growing private companies. In 2010, Vosika was among Ernst & Young’s Entrepreneur of the Year honorees in the Midwest.

“I think he has a little bit more competition now than when he first started, but he has made a difference in the industry,” says Mack Blakely, executive director of the Fort Worth, Texas-based National Electronics Service Dealers Association.

Blakely says that Vosika’s concept of harvesting parts from damaged TV sets was an innovative idea for the industry. While he says that there is now more competition, “no one, I think, is selling nearly as many as he is.”

The online retailer uses no traditional, old-school advertising such as print media, radio, or television. The company has created a buzz with about 400 videos on YouTube, primarily instructional videos on TV repair.

A spokesman for the Fortune 500 eBay Inc. declined to comment on the number of businesses in the United States such as ShopJimmy that have been launched using eBay as a retail platform.

If you can manage to track down a phone number for Vosika, his voice message directs you to send him an email: “I’d love to say thanks for calling, but I hate phone calls.” Looking ahead, Vosika says that if someone approached him with a buyout offer, he would entertain the idea, but would talk with his employees about any potential deal. For now, he’s caught up in the search for the next cache of TV parts.

“Our goal is to keep growing fast. There’s so much potential in the market. The faster we grow, the better we can serve our customers,” he says.

“Is it a half-a-billion-dollar market a year? Probably. Is it a billion? Could be. I’m not sure. There’s so many unknowns. There’s so many customers out there that are looking for TV parts,” he adds. “We have not figured out the ceiling on this market yet and we’re not even close to it.”