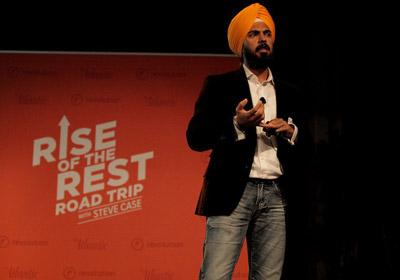 Courtesy of Rise Of The Rest
Deepinder Singh, CEO of 75F, makes his pitch during Tuesday’s “Rise of
the Rest Road Tour” stop in Minneapolis.

Mankato-based 75F is on a hot streak. The startup company just landed its second six-figure prize within the last month in head-to-head competition with other fledgling companies. On Tuesday, the producer of wireless heating and cooling management won the Minneapolis leg of a five-city pitch competition hosted by AOL co-founder Steve Case. Last month, 75F won a total of $105,000 — including the $50,000 grand prize — in the latest Minnesota Cup entrepreneurial competition.

Deepinder Singh, CEO of 75F, received a $100,000 investment in the form of an oversized check from Case on Tuesday and will now go on to pitch at a startup showcase during the March 2015 South by Southwest festival in Austin, Texas.

The company emerged from a pool of 10 contenders — read about the full list here — to successfully pitch Case on the second leg of the five-city “Rise of the Rest Road Tour.” The tour, designed to spotlight startups between the coasts, began Monday in Madison, Wisconsin, and continues in Des Moines; Kansas City, Missouri; and St. Louis. Tuesday’s stop included tours of the CoCo Startup Fair inside the Minneapolis Grain Exchange Building, Field Nation, Midtown Global Market and Sport Ngin.

75F uses a wireless zone controller to fix temperature imbalances for both comfort and energy savings for office buildings. A controller monitors and transmits information to a central control unit. That unit uses a cloud-based algorithm to control HVAC equipment and predictively balance airflow. Weather forecasts and indoor carbon dioxide levels are also analyzed. Smaller businesses are the focus of 75F’s efforts, a market in which Singh believes is a void.

“That void represents a $40 billion opportunity for the right product,” the Star Tribune quoted Singh as saying during his presentation in front of a five-judge panel on Tuesday.

Last month, 75F won $105,000 in the 10th annual Minnesota Cup. The competition’s co-founder, Scott Litman, told the Star Tribune that 75F demonstrated a well-thought business plan, superior presentation skills and “an unmatched vision for the future.” Singh told the newspaper that 75F had been in development for about seven years and employs 15 people.