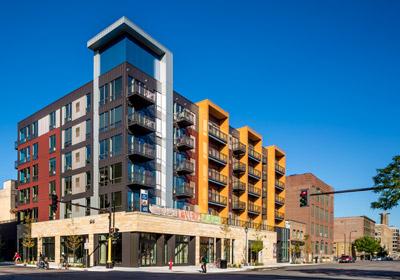 Courtesy of Opus
The recently completed Vélo project in the North Loop area of Minneapolis.

Apartment vacancy continues to hold steady across the Twin Cities amid an ongoing building boom for new multifamily rental housing. In its latest “Apartment Trends” report, Minneapolis-based Marquette Advisors reported an apartment vacancy rate of 2.4 percent across the metro at the end of the third quarter, down slightly from the vacancy rate of 2.5 percent reported a year ago.

It’s not clear what caused the change in the downtown Minneapolis numbers. The Marquette Advisors report indicates: “Note that our calculations do not include all units which have opened within the past six months and are currently in lease-up.”

Marquette Advisors vice president Brent Wittenberg could not immediately be reached for comment Tuesday morning on the latest findings.

Apartment vacancy rates of 5 percent or less are generally considered to be low vacancy markets that favor landlords. The average apartment rent across the Twin Cities is now $1,007 per month, an increase of 2.3 percent over the last year.

The Twin Cities apartment market still ranks at the low end of the spectrum compared to other national markets. New York-based Reis Inc., a real estate research firm, reported third quarter apartment vacancy in Minneapolis-St. Paul at 3.2 percent for the third quarter, lower than the national vacancy rate of 4.2 percent. (Different reports will often report different numbers due to variations in methodology.)

But there are signs that a shift could be underway in the market. The Reis report noted that national vacancy increased from 4.1 percent in the second quarter to 4.2 percent in the third quarter. That marked the first quarterly increase for apartment vacancy since the fourth quarter of 2009.

The bumpy housing market remains another factor driving today’s rental market. On Tuesday morning, the U.S. Census Bureau released a report that found the rate of home ownership in the U.S. hit 64.4 percent in the third quarter, the lowest rate seen in 19 years.