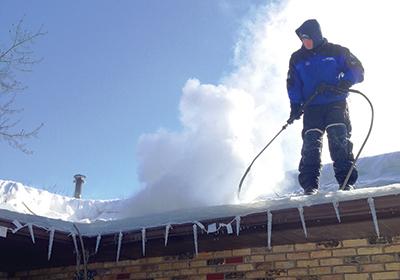 Joe Palumbo knows that his name will likely forever be associated with something Minnesotans despise: Ice dams. The mere mention of them makes Minnesotans shudder. We’re talking mosquito-level hatred here.

“Oh yeah, people can’t stand them,” the genial owner of Forest Lake-based Ice Dam Guys says. “And I hate to toot my own, but I think I created the awareness and made everyone afraid of them.”

Now there’s a legacy. And quite a story.

Back in 1994, Palumbo was running a landscaping business as a sole proprietor. In 1996 he incorporated and got into snow removal. One day, one of his subcontractors asked him a simple question.

“He asked if we could melt some ice on the side of a building. We were doing a lot of pressure-washing in the summertime and he knew we had these hot pressure washers. I looked at him and thought, why not?” he says.

And just like that, he had a new revenue stream. He started with a commercial building, attaching the pressure washer on the back of an enclosed trailer with a kerosene heater inside so the water wouldn’t freeze. He and his subcontractors would go out after-hours, often around midnight, and stand outside in the middle of winter, spraying hot water on what Palumbo called “giant spouts.”

The first thing Palumbo did was take out a small ad in the Forest Lake Times and put some yard signs out around town. The phone started ringing. So he took out more ads. Just simple one-line ads, for $7 a week. And business starting to slowly build. He added the ice dam removal to his services and kept his focus on landscaping during the summer.

Then two big things happened. One was the Internet. People started to find him through his website, and business scaled up. The second was his name. For years he went by Palumbo Services, but in 2010 he locked up the rights to the Ice Dam Guys. That was smart. People like the name, and can remember it.

But then came a business challenge for Palumbo: How much time and resources to devote to building out a business that has, at best, a two-month season?

“That’s been something I’ve given a lot of thought to. Could it be my sole income? Sure, if every year there’s a record snowfall. But that doesn’t always happen. We had a spurt from 2006 to 2009 with hardly any snow, and hardly any work. By then I had all this equipment that I just had to sit on. You have to be comfortable with that type of risk, as you can’t plan for the weather,” he says.

But he kept pushing. In 2012 he spent $20,000 on a radio ad, which didn’t result in a single client; he kept marketing, mostly in print. And when the snow fell (and how it’s fallen in the last couple years!) he and his subcontractors, who now number more than 30, were ready.

“We answer the phones from 6 a.m. to 11 p.m. and the phone from January through early March seems to constantly ring,” he says. Jobs can range from two hours to 20 hours; the average job is three or four hours, for which he charges $475 an hour.

“By 11 p.m., you are a zombie. After you stop answering the phones, you have a minimum of a couple hours of urgent things, and the arrangements for the next morning. So you’re going to bed at 1 a.m. and up again at 5. You’re running on four hours of sleep every day,” he says.

Last year, ice dam removal represented about 75 percent of his business. When he has time — not that he has much non-client time — he adds new content to his website, which he relies on to drive new business. He spends about three hours every week on content, and pays careful attention to search-engine optimization. He’s received calls not only from new clients but from reporters.

“The media has jumped on our business and ice dam removal as a category, and I go on radio and TV all the time in the winter talking about it,” he says. “Without the media, there wouldn’t be a category.”

The core staff is just him and two people who run the office—selling jobs, taking calls, working with technicians — and subcontractors. It’s a busy, hectic, process, but it’s a Frankenstein that Palumbo helped create and he knows the drill.

“You gotta bale hay when the sun shines,” he says. “I’ll sleep when I’m dead.”