It’s not every day someone skis through a snowstorm to reach your store. Particularly when what you’re selling is ice cream. But customers of Izzy’s Ice Cream, which has operated on Marshall Avenue in St. Paul since 2000 and last year added a Minneapolis location, arrive via both flip-flop and snow boot, according to co-owner Jeff Sommers. Izzy’s, known for its trademarked “Izzy Scoop”— a miniature scoop of ice cream placed on top of the cone — is also found in local grocery stores and restaurants, and its retail stores are open year-round.

“We meet lots of people who tell us they love ice cream, even in the winter,” says Sommers. “We don’t see ourselves as a seasonal business by any means, but we see a seasonal change [in] demand.”

It was the decision to change careers that led Sommers and his wife, Lara Hammel, to open Izzy’s. Sommers had been teaching in the Minneapolis Public Schools and Hammel was practicing law when they began discussing potential business ideas. Inspiration came in part from Cap’n Frosty, a parlor the two had frequented while Sommers was earning an MFA degree in printmaking from the University of Michigan, Ann Arbor. (His artist’s eye is evidenced by the design of the Minneapolis store, located across from Gold Medal Park. A red tower rising from the store’s roof brings in natural light, but also intentionally mimics both the neighboring Guthrie Theater tower and the ‘I’ in Izzy’s.)

By 2005, demand for Izzy’s had outgrown the production capacity of its windowless 2,000-square-foot kitchen that sits next door to the St. Paul parlor, but it took another six years to find a second location. Sommers and Hammel worked with Miles Mercer, who manages real estate development projects for the City of Minneapolis, to purchase the space.

In addition to drawing foot traffic from theatergoers, the location offers an advantage from a production and delivery perspective. Wholesale and catering account for approximately 20 percent of the company’s annual revenue.

“I’d say the majority of our ice cream customers on the restaurant side are in downtown Minneapolis,” Sommers says. “This puts us really close to those customers, and it puts us in a nice transit corridor in the first and second ring of suburb deliveries.”

The location also alleviates the psychological block that some face when asked to travel from Minneapolis to St. Paul. 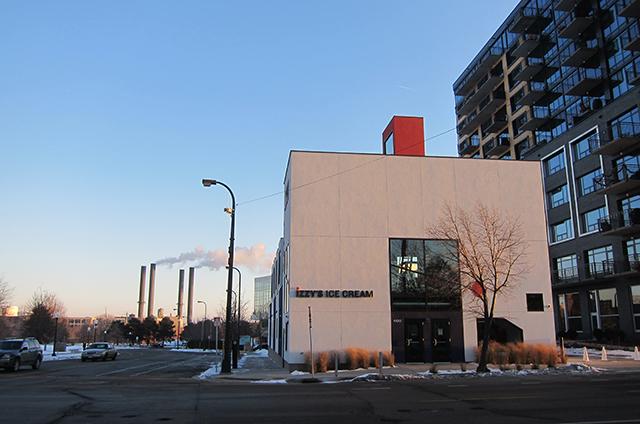 MinnPost photo by Tom Nehil
The red tower rising from the store’s roof brings in natural light, but also intentionally mimics both the neighboring Guthrie Theater tower and the ‘I’ in Izzy’s.

“It was really hard to attract customers from the west metro to cross the Mississippi to come visit us,” Sommers says. He anticipates that the Vikings’ new stadium, once completed, will bring in additional business. In its first year, the expansion into Minneapolis has already produced a boost in earnings—Sommers reported catering sales were up 20 percent, and retail sales up by nearly 50 percent this year.

The heightened business required an adjustment to Izzy’s hiring methods. With 80 percent of employees enrolled in school, says Sommers, “their availability and our peak seasons are sort of aligned.” 2014 is the first year they’ve taken advantage of this symmetry, hiring about 30 extra scoopers for summer-only employment. Previously, Izzy’s employees worked year-round.

Both locations hand out cones — a custom-made ice cream base is delivered weekly by Sassy Cow Creamery in Wisconsin — to suntanned and mittened hands alike. It’s a year-round challenge to adjust to the sharp drop in revenue in winter. Sommers reports that 80 percent of Izzy’s revenue is earned in the summer.

To prepare, Izzy’s begins to curb ice cream production in late summer or early fall, and around the same time, ingredient purchasing essentially comes to a halt. According to Sommers, winter traffic amounts to one-fifth of summer’s.

“The swing is, of course, extremely challenging,” Sommers says. “The wholesale and grocery are what keep us up and running and hanging in there. “

The company has new products in the works that aim to bolster those wholesale profits. Plans include the launch of an online ice cream ordering program, and Izzy’s recently introduced packages of Izzy Pops — lollipop-shaped ice cream bars — to Kowalski’s.

“We start coming out with seasonal flavors, and things that’ll have a fall tone to them,” such as pumpkin and cinnamon, Sommers says. “Maybe a deeper commitment to chocolate and coffees than you would in the deep heart of the summer.”

David Najarian manages Nelson’s in Stillwater. Like Izzy’s, Nelson’s faces the challenge of planning and scheduling a business where most of the revenue streams in just three to four months out of the year.

“I’ve been in food service for 19 years and worked a variety of cuisines,” Najarian says. “There’s nothing really quite like that that’s so fickle.”

Izzy’s success, Najarian says, is indicative of the strong relationship they’ve grown with their customer base.

“People are loyal about their ice cream,” he says.

And it’s ice cream that Izzy’s remains committed to. While some ice cream companies offer an alternative, winter-friendly product, “we’ve stuck just with ice cream because that’s what we know and that’s what we’re good at,” Sommers says. “I don’t think we’d come true on the promise if we came out with a full coffee program, or a food or lunch program.”

The approach, Sommers says, comes down to a simple technique: giving each customer “a good reason to come back, a good experience and a good ice cream cone.”

How Izzy’s ice cream plans to make money in winter