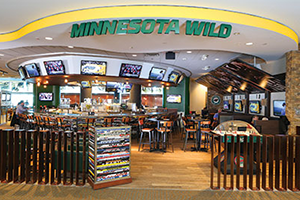 The restaurant, which had its grand opening in December, serves passengers waiting to board flights on Sun Country and Southwest Airlines. It serves a range of appetizers, salads, sandwiches, entrees, breakfast food, beer, wine and hard liquor. The hockey connection is provided via Wild iconography and memorabilia.

The Wild restaurant replaces Fletcher’s Wharf, which offered recipes from Lord Fletcher’s restaurant on Lake Minnetonka. The Metropolitan Airports Commission (MAC) was interested in improving amenities and services in Terminal 2, (T2) and the Wild restaurant is part of that effort, says Matt Grimm, manager of concessions and business development. (Surdyk’s Flights and Barrio offshoot Cocina del Barrio opened in T2 in 2013.)

“There was a need to enhance the customer experience because [T2] traffic was increasing dramatically,” says Grimm. About 4.7 million passengers flew in and out of T2 in 2014, a steep climb from 3.4 million in 2012. The restaurant serves 10 gates, with three more under development.

In Terminal 2, Grimm says, “A lot of people flying out are going on vacation and want a drink and something quick that is familiar to them. More than anything else we wanted the Wild spot to feel accessible and comfortable and have a wide-ranging menu that would reach a lot of people. That is why we didn’t go with another chef-driven [concept].”

It’s a no-lose proposition for the Wild. It’s a way to get “our brand, 365 days a year, in front of fans and future fans,” says John Maher, vice president of brand, content and communications for the Minnesota Wild. The Xcel Energy arena’s stone and wood finishes are replicated in the new restaurant, which seats about 200 people.