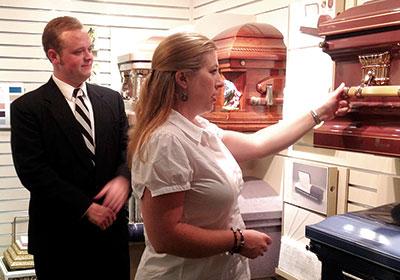 Conjure in your mind the image of a mortician. What do you see? Maybe a somber, older man. Something spookier like the cryptkeeper, perhaps?

The trade isn’t just about handling the deceased.

“While we handle embalming of the body, we primarily serve at a time of loss or bereavement to assist the family — the deceased and the survivors,” University of Minnesota Mortuary Science program director Michael LuBrant says. “We like to say that we get the dead where they need to go and the living where they need to be.”

That much is not new. Yet the profession is quickly changing across the country, and it’s becoming an increasingly female-dominated business.

Starting around 2000, women eclipsed men in mortuary science programs. They now make up about three-quarters of the university’s program, says LuBrant. But nobody is quite sure if the field is drawing more women or simply fewer men.

The gender flip-flop isn’t the only shift. Funeral services have begun to change as America becomes increasingly secular. Many morticians and others are stepping up to become “celebrants” — helping guide services in a non-religious manner.

What brings people to the line of work? LuBrant says that many application essays in his department address personal experiences with death and how a funeral director helped make the process easier. Some had negatives experiences and wanted to help others avoid them. Few lack any experience with death.

Misperceptions of the profession run more rampant than ever, in part because improvements in health and medicine mean some Americans enter middle age having never attended a funeral.

“I know people in their 40s with grandparents still alive,” LuBrant says. “There was a time when death was just more a part of our daily lives, and that’s just not the case anymore.”

The business of dying is changing